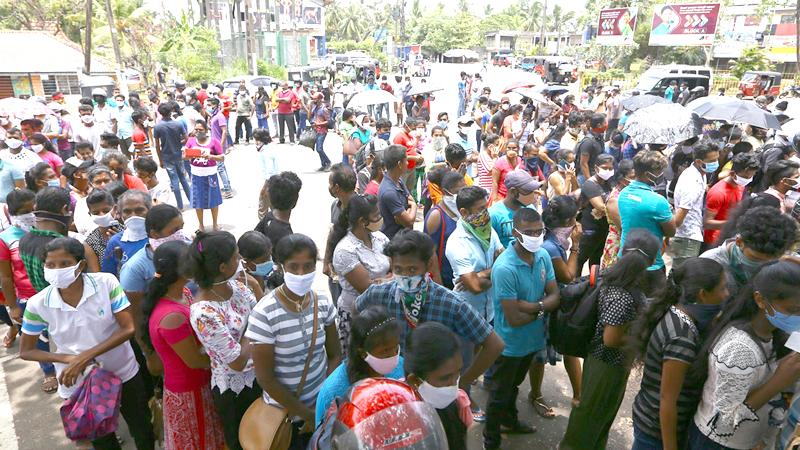 Even as frightened and hapless garment workers slaving in the multitude of factories in the Gampaha District, the epicentre of Sri Lanka’s calamitous covid-19 spread, were herded into trucks and taken like cattle to ill equipped and unsanitary quarantine camps under the impatient watch of the military this week, deeply fundamental ironies are at play.

A stark contrast in fighting covid-19 then and now

Did those unhappy citizens asked themselves as to why this is happening in quite this way to themselves, as members of Sri Lanka’s ‘master race’ or ‘maha jathiya’ as that pernicious Sinhala translation goes? Gampaha was a flag bearer of the massive franchise that propelled the Rajapaksas, siblings, sons, nephews and assorted paltry hangers-on to power in this country in August, just a few months ago. Across these afflicted groups, a common refrain was, ‘we voted them in not to do this.’

Even with many protesting in respect of the treatment meted out to them, hundreds more waited in the scorching sun for their PCR tests. Daily wage earners in the lockdown areas meanwhile wailed that they had no money to buy even meagre supplies of food. In March, this Government and this Presidency controlled the initial spread of the covid-19 pandemic in Sri Lanka with all hands on deck so to speak, in the face of a looming General Election.

But this time around, no media showed obliging images of dry goods supplies being ferried into quarantined areas or eager supplicants praising their benefactors. Instead, intrusive television cameras hunted covid-19 victim much like the leopard fixating on its prey. It was a tragically illustrative case study of ‘before’ and ‘after.’ So as uncharitable as it may be, it is hard to rid oneself of the conclusion that the vigour and vitality with which covid-19 was combated initially had a lot to do with the favourable vote result that the Government was aiming for.

Its efforts at the time were compared to the disaster that might have occurred if the bickering Sirisena-Wickremesinghe alliance had continued to be at sixes and sevens if the global pandemic had erupted during that time. That seemingly concerted effort paid off. In the poll that followed in August 2020, an unthinking public, blind to Sri Lanka’s history where massive majorities had invariably been used by rulers to consolidate power at the cost of the national interest, swept a dangerously bloated mandate their way. The result was predictable.

Scarcely two months into securing the Presidency and the Government, this mandate is being used to justify all and sundry. That ranges from pressing ahead with a constitutional amendment that virtually all sectors of society, including sizeable segments of the Buddhist, Catholic and Christian clergy, oppose to a meticulously planned rolling back of protections for religious and ethnic minorities. Thus, as a nation shrinks in aghast dismay at numbers of the covid-afflicted rise, there are harsh truths to be faced.

The battle is not in courts of law over Determinations, (formally released or not as some who came later to the game media-wise may sniff), with erudite arguments and the like. As an aside, precious little erudition has survived the wholesale rout of what used to be our legal and judicial intellect. That rout, it must be reminded, is not owing to the Rajapaksas. On the contrary, this decline commenced almost two decades ago with the Supreme Court itself being subverted following the Office of the Chief Justice being enveloped by relentless political controversy.

Battle is elsewhere than in the courts

Honourable ‘greats of the profession’ swayed this way and that depending on political loyalties. What we have presently are the miserable remnants of that decline. While political loyalties were then shrouded in a mask of civility, what is different now is that this mask is absent. That is all. One or two judgments to the contrary during 2015-2018 were not reflective of the Court recovering itself as much as one ‘koha’ does not the New Year make.

So the battle is elsewhere than in the once hallowed precincts of courts of law. And as the ‘maha jathiya’ which trouped in triumphant numbers to celebrate the victory of ‘their Sinhala Buddhist torchbearers’ experience fear and isolation, there are hard truths to face. The latest covid-19 outbreak, whether manifesting in its most malignant form in the free trade zone factories of Katunayake or for that matter, in respect of the isolated incident of covid-19 spread in Polhena, Matara a few weeks before emanating from overseas visitors who were ‘allowed’ to slip through quarantine controls, is traceable to one source.

That is Sri Lanka’s political, economic and social privilege which speaks louder than all the quarantine regulations or, for that matter, laws that may be brought by the Minister of Health. This is symbolised by the contradiction arising between the Minister gazetting a regulation which prescribes it to be an offence to appear in public without wearing a mask and its immediate violation by the Minister itself when reportedly appearing at a press conference without a mask.

True reconciliation from the pain of ‘the other’

Two weeks into the Gampaha outbreak, the public is still not told as to where those brought down from India by the company in the eye of the storm had been quarantined, for what period and what safety checks were in place. Anodyne and generalised explanations will not suffice. Even in March this year, it was pertubing that the leadership of this country’s tried and tested public health service in the covid-19 pandemic prevention effort had been eclipsed at times by the military leadership. It was reminded, albeit in vain, that a a global health emergency cannot be tackled in the same way as sending troops to war.

But that war mentality was encouraged by the leadership. The militarisation of civil leadership has deepened as one by one, public officers are replaced by military men and women. The command leadership in the public health sector seems to have been severely affected in a negative sense. That will no doubt have a ripple effect on the population as public trust and confidence gets eroded. The media meanwhile continues to go into the homes of the covid-19 affected and wait outside crematoriums sans respect even for the dead with ghoulish and sensationalist preoccupation with those who ‘should be blamed.

This culture of ‘blaming’ the helpless and the hapless must stop First, those of the Muslim ethnicity, then those who came from overseas, then drug addicts and now, hapless workers in the garment industry who are reviled and scorned. Indeed, as Gampaha’s garment workers disappeared into the bowels of unhospitable quarantine camps to be given half-cooked food and treated as pariahs, they and others may perhaps ask themselves as to whether the sense of fear they felt may have been equally experienced by the minority populations of the North and East, aggravated a thousand times more?

The answer to that question might give rise to the seeds of citizen-reconciliation which will be far more transformative than a hundred resolutions in the United Nations Human Rights Council in Geneva or talkshops in Colombo on transitional justice.