Shani Abeysekera’s vehicle shot at making a hole in the petrol tank. 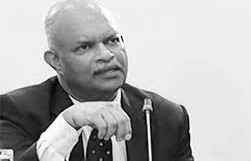 Investigations into the incident where a police constable had allegedly fired at the car of former Director of the Criminal Investigation Department (CID), retired SSP Shani Abeysekera, have been handed over to the CID.

The incident had reportedly taken place on 17 December 2022, when the car in question, which was shot at by a police officer assigned to his protection, had been parked at Abeysekera’s residence, police sources said.

Abeysekera later found out about the incident when he had gone to pump fuel into the car, and discovered a leak in the fuel tank. When the vehicle was then sent for repairs, it was revealed that the leak was caused due to a gunshot.

The former CID Director subsequently informed the Officer- in-Charge (OIC) of the Borella Police Station of the incident, following which statements were recorded from the police officer involved in the shooting, while further investigations were handed over to the CID.

Abseysekara was provided with police protection owing to the multiple death threats allegedly received by the former CID Director.