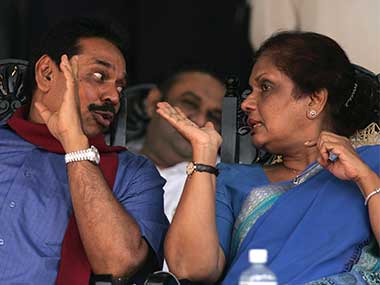 Taking on  former president Kamarathunga for her statement that “the war-affected Tamil women are now subjected to sexual harassment by men from their own community and military and other public officers”  former president Rajapaksa says that ““what we have here is a former President of Sri Lanka and a former Commander in Chief of our armed forces echoing the accusations made by our enemies in what is obviously a deliberate attempt to vilify our armed forces on the eve of the UNHRC meeting.”

Kumarathunga’s accusation made at a meeting with Sri Lanka Foreign Correspondent’s Association  was widely published by local and international media. It is common knowledge that sexual exploitation of war-affected Tamil women by unformed and civilians takes place in Sri Lanka.

“Tamil women who survived Sri Lanka’s civil war now face widespread sexual exploitation by officials in their own community as well as from the army, the head of an ethnic reconciliation body said Wednesday.”

Former president Chandrika Kumaratunga, the chairman of the Office for National Unity and Reconciliation, said women who were widowed during the 37-year conflict were among the victims of abuse by officials who frequently demand sexual favours just to carry out routine paperwork.

“There is a lot of sexual abuse still going on by officials, even Tamil officials and even at lower levels, the grama sevakas (village officials),” she told Sri Lanka’s Foreign Correspondents’ Association. “Even to sign a document, they abuse the women and of course some people in the (armed) forces” continue to commit sexual abuse, she said.”

Kumarathunga did not deny the AFP report.

Then Sri Lanka Army issued a statement refuting Kumarathunga’s accusation. it said that “The Army categorically denies the same as a baseless allegation.”

Suddenly woken up Kumaathunga now has  issued a statement form her outfit ONUR accusing Army for issuing a statement.

“It appears that the news reports refer to a meeting Chandrika Bandaranaike Kumaratunga, Chairperson of ONUR, had with the Foreign Correspondents Association (FCA) in Sri Lanka. We are surprised that a senior Army official has not thought it fit to peruse and understand the news reports of a statement allegedly made by a former Head of State and Commander in Chief,” the statement says.

“ONUR is an institution that is coming under the purview of the Commander in Chief, President and is chaired by Ms Kumaratunga. It would have been good practice and common courtesy for the Director – Media of Army Headquarters to seek clarifications from ONUR before rushing to issue a statement,” it further says.