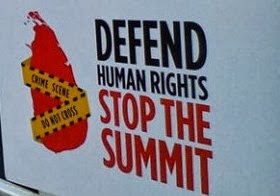 With the Commonwealth Heads of Government Meeting (CHOGM) just around the corner, Sri Lanka in general, and Colombo in particular has gone a bit mad getting things ready for the visit of the world’s great and good (minus Canada).  In Colombo especially it feels a little bit like living in a city sized version of a young married couple frantically getting the house ready for when the in-laws are due to visit for the first time.

Here, we round up just some of the things that are being done, presumably to try and make sure that we look our best for the visiting dignitaries.

The long promised expressway to serve Bandaranaike International Airport is finally due to open later this month, with the President to officially open it on October 27th.  It will also be open to the public for 3 days before that, presumably for free, although details are unclear.

The expressway, Sri Lanka’s second, cost $11.3m per kilometre, 10% more than the Southern expressway, and is heavily funded by a loan agreement with China’s Exim Bank.  The new road is expected to make the trip to the airport drastically shorter, but there are concerns about heavy traffic where the expressway ends, and it will interesting to see how this is managed, with such a short period between the road opening and CHOGM visitors arriving.

The expressway also features “shanty covers” along parts of the route so that users of the road will not have to look at slums whilst they are driving to and from the airport.  We wouldn’t want visitors getting the wrong idea about Sri Lanka, after all.

Colombo is being aggressively “beautified” everywhere you look, which at the moment seems to involve digging up everything in sight.  Along the existing road to the airport, traffic is being made even worse because, amongst other things, trees are being planted along the road; Vihara Mahadevi park has been closed for the whole of October so that the long running “improvements” can be completed; pavements are being added or repaired across the city; unsightly buildings are being demolished and the Colombo Municipal Council is spending millions on building up to 500 new bus stops.

The goverment has banned all protests, marches and the display of banners and black flags in Colombo for the first three weeks of November.  Legal Advisor to the Defence Ministry, Hariguptha Rohanadheera said that the move was necessary as part of the security arrangements for visiting representatives, but the move is surely aimed at minimising potential embarassment for the government.  Whether it will be entirely successful remains to be seen, as there is the potential for various different groups to want to express themselves, from human rights campaigners, to nationalists and religious hardliners who want to show their anger with what they see as various Commonwealth members’ bad-mouthing of Sri Lanka.

The move is understandable from the government’s perspective (protests look bad), but also counter-intuitive in another.  The Commonwealth has been increasingly seeking to re-brand itself as an organisation focused on human rights and promoting democratic values (hence the controversy over Sri Lanka hosting it in the first place), which hardly matches the banning or protest and public gathering, which many would see as a fundamental right.

You cannot fail to have noticed that changes are being made to the road system across the capital, with closures widespread and new one-way systems being implemented in, for example, the Fort and Pettah areas.  Whilst some of these may be good ideas and help to alleviate traffic black spots, it does make you wonder why it took the arrival of the Commonwealth party to expedite such developments.

Various roads will also be closed during the meeting itself to facilitate delegates movements and to help security efforts.  In other words, expect traffic chaos everywhere else.

5. Building a mini-zoo in Battaramulla

In one of the more bizarre moves, the Botanical Gardens and Public Recreation Ministry is spending Rs.10m on a mini-zoo in Battaramulla to coincide with CHOGM.  The development will also include a model village to show off traditional Sri Lankan culture, a cultural centre and a Laksala.  It will remain open to the public after CHOGM.

6. 31 schools closed for the duration

31 schools across the capital will be closed for the duration of the CHOGM so that they can be used as security centres.  To make up for the lost time, schools have been adding extra hours to the school day for the last few weeks, leading to extra traffic and some chaos in the education system.  Not to mention the effect it will have on parents who have to find something to do with their children from the 6th to the 19th November.

7. CHOGM to be a public holiday

November 15th is likely to be declared a public holiday to mark the occasion of the meeting, although it is not really clear why. The main heads of government meeting of the summit will take place at the Nelum Pokuna theatre on that day, so perhaps the idea is to keep as many people off the roads as possible, or perhaps just keep them happy.

Other more bizarre pronouncements include Atomic Energy Minister Patali Champika Ranawaka telling parliament that all CHOGM delegates will be safe from nuclear radiation attacks designed to give them cancer whilst in the country.  Those visiting will presumably also be relieved to know that Sri Lanka has promised not to deploy any weapons in space.

There will undoubtedly be more initiatives and announcements in the next few weeks as CHOGM draws closer.  Some will bring welcome changes and developments, others will just cause disruption and inconvenience for the public in the name of protecting the Commonwealth visitors and Sri Lanka’s image.

But it’s all for the greater good, obviously, and if you wanted to complain you can’t – well not too loudly anyway, because protests have been banned.
RS