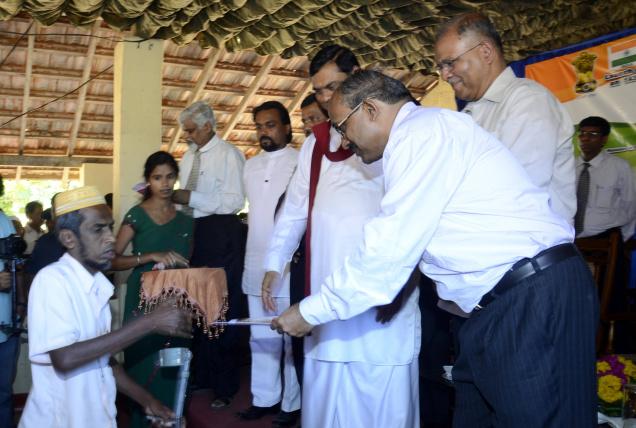 Indian Consul General V.Mahalingam handing over housing documents to a beneficiary to mark the inauguration of the second phase of the Indian Housing project for internally displaced people at a school in Periyamadhu in Mannar district on Tuesday. Photo: R.K.Radhakrishnan

1
This is part of India’s commitment to build 50,000 houses in Sri Lanka
When Santhirakumar Vanitha, an internally displaced Sri Lankan Tamil, received a laminated A-4 size certificate that described her as a recipient of an Indian grant to build a house at Eluthumadduval village on Tuesday afternoon, it marked a new beginning for her.
A beginning that would translate into a new life without displacement and anxieties, she said.
Standing near her was 65-year-old Balakrishnan, also from the same village, but living in rented accommodation in Jaffna. His house was one of the thousands razed down during the Sri Lankan Army’s war with the Tamil Tigers. Balakrishnan was not in the queue of the few recipients who were handed over certificates on Tuesday, to mark the second phase of the Indian Housing Project for construction and repair of 43,000 Housing Units in Northern and Eastern Provinces. “My name is there [in the list of beneficiaries]. My turn will come. They can’t do it for everyone at the same time, right?.”
“Yes, they can’t,” answered Selvaraja, who was standing next to him. Selvaraja and Balakrishnan were among the people of the village allowed by the Army to come back to their land early this year. “My name is not there on the list of 85 beneficiaries from my village,” he said, and added that there were many criteria one had to meet ahead of becoming eligible for a grant to build a house. But, he hoped that he too would get one. “I hope all 316 families in the villages are given a grant to build a house,” he said. Selvaraja lives in the village, and his house, a temporary structure, of tin and mud, is a short distance from where India’s biggest-ever overseas project was launched.
About 1,500 beneficiaries were selected to receive assistance under this Project in the first lot and funds have been transferred for the first instalment of LKR 100,000 into the bank accounts of beneficiaries. Construction work on the ground will begin soon. By August 2013, 10,000 houses will be built. In three years, India, in partnership with Sri Lanka and the implementing agencies, hope to complete construction of 50,000 houses. India has already set aside the requisite funds for this purpose, said Indian High Commissioner to Sri Lanka Ashok K. Kantha. “This is no ordinary project, this is a labour of love,” he added.
The first phase of 1,000 houses inaugurated in November 2010 was completed in July this year.
The second phase of the project adopts an owner-driven methodology, under which owner-beneficiaries are involved in the process of construction. A cash grant of LKR 550,000 (approx. INR 2,30,000) is being provided for construction of a new house in instalments linked to progress in construction. A cash grant of up to LKR 250,000 (approx. INR 1,04,000) will be provided for repair of housing units based on actual assessment of damage.
India had selected four reputed Implementing Agencies to help with the process: UN-Habitat, International Federation of Red Cross in partnership with Sri Lanka Red Cross, National Housing Development Agency of Sri Lanka and Habitat for Humanity. These agencies have experience in implementing similar projects in Sri Lanka.
The project is under full grant assistance of the Government of India with a total outlay of LKR 30.6 billion (INR 1,372 crore or approx. $270 million) making it one of the largest grant assistance projects implemented by the government outside India.
The construction of 43,000 houses for resettlement and rehabilitation of IDPs in Northern and Eastern Provinces is part of India’s overall commitment to build 50,000 houses announced by Prime Minister Manmohan Singh during the visit of President Mahinda Rajapaksa to India in June 2010.

The third phase of the housing project is expected to commence before the end of this year. In this phase, about 2,000 houses will be directly built by construction agencies for people from the most vulnerable sections of IDPs in the Northern and Eastern provinces unable to build their own houses and 4,000 houses for Indian-origin workers in tea estates in the Central and Uva provinces. The process of selection of executing agencies for construction of 4,000 houses is presently under way.
(PHOTO Indian Consul General V.Mahalingam handing over housing documents to a beneficiary to mark the inauguration of the second phase of the Indian Housing project for internally displaced people at a school in Periyamadhu in Mannar district on Tuesday. Photo: R.K.Radhakrishnan)
The Hindu
Share
Facebook
Twitter
WhatsApp
Pinterest
Email