A controversial Commonwealth summit takes place in Sri Lanka next month. The country has more outstanding cases of disappeared people than anywhere else in the world, apart from Iraq. The Telegraph investigates

By David Blair, Mannar
The abductors arrived in a white van shortly before midnight, stopping outside a modest home in a palm-fringed town on Sri Lanka’s north-western coast. Inside the house he shared with his uncle, Anton Saniston Manuel lay asleep in his sarong.
The men burst in and at the point of a gun the 24-year-old fisherman was led away. That was five years ago and nothing has been heard of Anton Saniston Manuel since that night.
“Sometimes I think to myself, ‘perhaps if they had killed my son, that may be better than me sitting here and wondering where he is’,” said Uthayachandra Manuel, his mother.
“If they had killed him, at least we could have done a religious ceremony and prayer and I would have thought to myself ‘it’s another death’. The pain of a missing child is not something that anyone can really understand.”
That pain is endured by thousands of families across Sri Lanka. As President Mahinda Rajapaksa prepares to welcome the Prince of Wales, David Cameron and about 50 other presidents and prime ministers for a Commonwealth summit next month, he is striving to portray Sri Lanka as a thriving democracy, recovering from decades of civil war.
In reality, Mr Rajapaksa leads a country where thousands are held without charge or trial under a draconian law, and thousands more have simply disappeared.

Mr Cameron and his fellow Commonwealth leaders will be meeting in a nation with 5,676 “outstanding cases” of disappearances, according to the United Nations – the highest number in the world besides Iraq.
Mrs Manuel has no doubt that the security forces abducted her son in the fishing town of Mannar on Sept 11 2008. 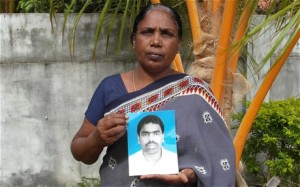 Uthayachandra Manuel, 56, holding a picture of her son Anton Manuel.

“There is an army and a navy camp nearby and many checkpoints along the way,” she said. “It’s impossible that it could have happened without the soldiers at the posts knowing. From my perspective, it was the military who have done this.”

She added: “I believe that my son is under the custody of the government.”

Anton Manuel disappeared in the final months of Sri Lanka’s bloody civil war, when the Liberation Tigers of Tamil Eelam (LTTE) were fighting for a separate homeland for the Tamil minority. Mr Manuel is a Tamil, but his mother insisted that he was not a rebel, although she conceded that he probably gave food and petrol to the LTTE. “That’s what the entire village did. If that’s the reason for arresting him, then the army has to arrest the entire village,” she added.

Holding a picture of her son wearing a clean white shirt, Mrs Manuel said: “The last time I saw him, he was wearing exactly this shirt. I haven’t washed the shirt yet. I just have it folded.”

Her search for her missing son has taken Mrs Manuel to prisons across Sri Lanka. In 2010, a government minister wrote an official letter stating that Anton Manuel was inside Boosa detention centre in the south. She duly travelled almost 300 miles there, only for the prison authorities to deny any knowledge of her son. One official reminded Mrs Manuel that a parliamentary election was imminent, adding:

“The minister wants your support. Lots of people have these letters.”

After her hopes were raised and dashed, Mrs Manuel persisted. “I would know if he was dead; I am his mother. I would know inside me,” she said.

Today, she can travel freely in a country at peace. Mr Rajapaksa ended 26 years of civil war by crushing the LTTE in a decisive battle in 2009. But the disappearances did not end with his victory.

Two days before the president was re-elected in 2010, a 50-year-old journalist was leaving his office in Colombo. Prageeth Eknaligoda’s newspaper was often critical of the government. He had recently written an article entitled “Why we should not give another term to Rajapaksa”. After that, he was tailed by men whom he believed were state agents. 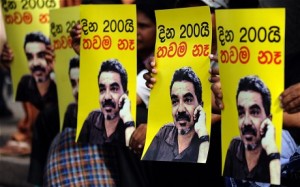 “He knew that some people were following him and he said to a friend ‘if you give me a pencil and paper, I can draw the face of the man who is following me’,” recalled his wife, Sandya. On Jan 24 2010, he left work as usual at 7.30pm. The only clue to his fate was provided by a taxi driver who often drove him home. On that night, he rang to ask if the journalist needed a lift, but Mr Eknaligoda declined the offer, explaining that he was already in a car. Just before he hung up, the taxi driver heard the journalist say: “But this is not the right way”. Nothing has been heard of Mr Eknaligoda since. “At about 9.30pm I called him, but his phone was switched off,” said his wife. “I tried calling him until the morning, but the phone didn’t work.”

As for who abducted her husband, Mrs Eknaligoda has no doubt. “The present government is behind this,” she said. “First we suspected they were behind this, but now we are sure because of their behaviour.”
No effort has been made to investigate the disappearance and Mrs Eknaligoda has been told that powerful figures were offended by the article. She believes that no one else had a motive for the kidnapping. “If some criminals did it, they would have asked for money to release him. This has not happened,” she said.
Like Mrs Manuel, she lives in hope that she will see her loved one again. “Yes, I will see him again. I have faith in my religion, in my belief,” she said. 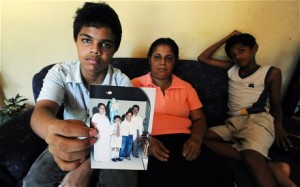 In his first Independence Day speech after the war, Mr Rajapaksa said: “I am entrusted with the task of uniting the hearts of all sections of our people. I willingly take over the noble task of creating peace.” He duly began an ambitious campaign to rebuild northern Sri Lanka, much of which had been under LTTE control. Some £2 billion has been invested, far more than the amount spent on new infrastructure anywhere else in the country.

But Northern Province remains dotted with military bases – The Daily Telegraph counted 51 in four days – and the new roads and hospitals carry posters paying homage to the president. One billboard in Jaffna, the provincial capital, shows a beaming Mr Rajapaksa alongside the slogan: “You are the sun and the stars and forever you will be the President. Live forever!”

Meanwhile, Tamils bitterly recall how the civil war’s final battle saw the army corral 330,000 civilians on the beach at Mullaitivu, pounding the area with heavy artillery. The LTTE shot anyone who tried to flee, leaving no escape route. Some 40,000 people were killed in just 16 weeks in what the government officially called a “humanitarian operation”.

When the war ended, Mr Rajapaksa repealed the emergency regulations in force since 1983. But he kept the Prevention of Terrorism Act (PTA), originally passed as “temporary provision” in 1979, allowing the regime to detain anyone without charge or trial for 18 months.

In January, the army raided a home in Northern Province and took away a 33-year-old man on suspicion of hiding weapons. “They beat him up and they covered his eyes in black cloth,” said the man’s aunt. “They kept beating him up and taking him from place A to place B, screaming at him ‘where are the weapons’. But there were no weapons to show.”

The man has not been charged or brought before a court. Under the PTA, the government can keep him behind bars simply by signing a new detention order every three months.

The authorities have not revealed how many people are being held under this law, but independent estimates suggest a figure in the thousands. Now Human Rights Watch and Amnesty International have joined forces to demand an international inquiry into the disappearances.

Neville de Silva, the Sri Lankan deputy high commissioner in London, said the government had established its own inquiry into missing people in August.

“There is an official body that is looking into these cases,” he said. “Disappearances don’t necessarily mean they are in the country. They could have left by boat or by other means. So it’s not a simple matter to locate them. Documents are often not available, people tend to change their names. It’s not a simple process; it’s one that takes time.”

In the five years since her son’s abduction, Mrs Manuel has almost given up hope of speaking to him again. She only wants to know that he lives, and to set eyes on him. “The only request that we have for the government is if our children are alive, we just want to see them from afar,” she said. “All we want is to see our children from a distance.”
TG