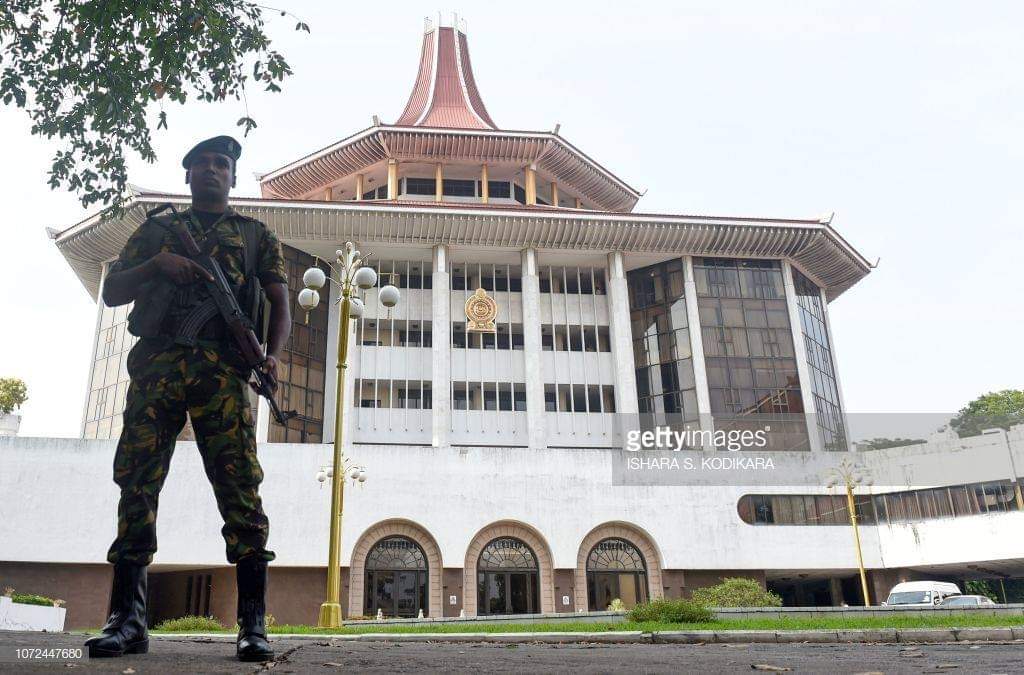 In handing down its determination on the 20th Amendment Bill, the Supreme Court has ruled that four clauses need a referendum of the People along with a two-thirds majority in Parliament while the rest can be passed by a two-thirds majority of Parliament alone, according to a copy of the Court’s opinion that was available with senior government officials yesterday.

The four clauses that four out of five judges held require a referendum as well as a two-thirds majority in Parliament are the 20th Amendment Bill’s restoration of Presidential immunity to the extent of preventing fundamental rights challenges by citizens, repealing the President’s duty to create the conditions for the holding of free and fair elections as requested by the Election Commission, the dissolution of Parliament within one year and removal of the constitutional duty on public officers to obey directives of the Election Commission with failure to do being an offence (Clause 22)

In coming to its decision, the Supreme Court has noted that the remedy of impeachment of the President, which had been advanced by the Attorney General to suitably address the question of the President’s intentional violation of the Constitution, is not an alternative remedy sufficient for the purpose. ‘However the existence of such alternative remedies and political deterrents do not assuage immunity’s inherent incompatibility with the People’s right to remedy’ the Court said.

In respect of Clauses 3 and 14, , they have said that the Attorney General’s submissions that relevant amendments will be moved at the committee stage of the parliamentary vote will adequately rectify those inconsistencies. In respect of restoration of the immunity of the President (Clause 5), the Court has ruled that the 20A amendment Bill must be amended to bring the 19A status quo back.

The Court dismissed the argument that, ‘immunity is essential for the unimpeded and efficient discharge of functions’ stating that these submissions ‘failed to establish a cogent and rational nexus between the non-justiciability of the President’s acts and the effective discharge of functions and duties.’

In the Determination by a Bench presided over by Chief Justice Jayantha Jayasuriya with Justices Buveneka Aluwihare, Sisira de Abrew, Vijith K Malalgoda and Priyantha Jayawardene, the Court has observed however that, this constitutional inconsistency would cease if Clause 5 of the 20th Amendment Bill is amended to provide for the People to invoke the jurisdiction of the Supreme Court in such instances.

This Court’s ruling is in line with the 19th Amendment to the Constitution which, amended the old Article 35 of the 1978 Constitution by allowing fundamental rights petitions to be filed against the Attorney General, ‘in respect of anything done or omitted to be done by the President in his official capacity.’

Meanwhile, the Court has also ruled that, the 20th Amendment Bill’s repeal of Article 104GG which made it an offence inter alia, for a public officer and other holding like positions to disobey directives and guidelines issued by the Elections Commission would have a prejudicial impact on the franchise and as such, would require a Referendum to be passed along with a special majority in Parliament. However in relation to the 20th Amendment Bill permitting the Elections Commission to issue guidelines during an election period to all state and private media, the Court has held that, such a distinction between state and private media institutions to facilitate free and fair elections based on the argument that private media does not function on public funds, is ‘not a classification based on intelligible criteria.’ Therefore it has held that this clause will only require a special majority in Parliament to be passed.

The Court has also held that Clause 3 of the 20th Amendment Bill which deleted the duty of the President to ensure the creation of proper conditions for the conducting of elections on the advice of the Elections Commission was, to that extent, inconsistent with Article 3 read with Article 4 of the Constitution and would have to be approved by the People at a Referendum along with the special majority in Parliament. However, the committee stage amendments proposed by the Attorney General includes restoring that duty to Article 33.  As such, the Court ruled that the inconsistency would cease as a result of that amendment as proposed.

In other respects, the Court has dismissed the claim that holding dual citizenship is a disqualification for election as a Member of Parliament, stating that arguments pertaining to ‘split loyalties’ and ‘conflicts of interests’ are surmise and conjecture that it is not called upon to consider. Further, it has gone on its previous reasoning that the replacement of the Constitutional Council with a Parliamentary Council able to only make ‘observations’ to the President in respect of appointments to key positions in the public service and the judiciary is not unconstitutional in that this amounts to a ‘redefining’ of the presidential power of appointments.

The Court has also held that empowering the President to remove the Prime Minister and appoint a new Prime Minister who, in his opinion, commands the confidence of Parliament, does not infringe the sovereignty of the People and therefore, does not need a Referendum.

Meanwhile, Clause 15 of the 20th Amendment Bill that, any amendment proposed to a Bill in Parliament must not deviate from the merits and principles of such Bill, has been noted as progressive by the Court which has also pointed out however, that this clause appears to have been removed in the proposed committee-stage amendments by the Attorney General. In relation to the time limit to challenge a Bill being narrowed to seven days from fourteen days, the Court has declined to hold that this affects the People’s judicial or legislative power but has opined that this merely ensures that challenges to Bills are efficiently and expeditiously filed.

It has moreover held that the clauses of the 20th Amendment Bill, bringing back the mechanism of Urgent Bills requiring the Supreme Court to make its Determination within twenty four hours or such longer period not exceeding three days as the President may specify or allowing the President to place bills defeated by Parliament to the People by a Referendum, can be passed by the special majority alone.

In relation to the powers of the Auditor General over auditing the Office of the Secretary to the Prime Minister and the Secretary to the President that were absent in the 20th Amendment Bill which amended Article 154 of the Constitution, the Court has noted that the committee stage amendments proposed by the Attorney General would bring back that power which then rectifies the adverse impact on the legislative power of the People.

Where the auditing of companies where the Government holds fifty per centum or more of the shares are concerned which provision has been proposed to be deleted by the Bill, the Court has accepted the argument of the Attorney General that the mere absence of reference to any class of institutions in Article 154 does not preclude the Auditor General from exercising his powers under the National Audit Act which includes such entities as ‘auditee entitees.’