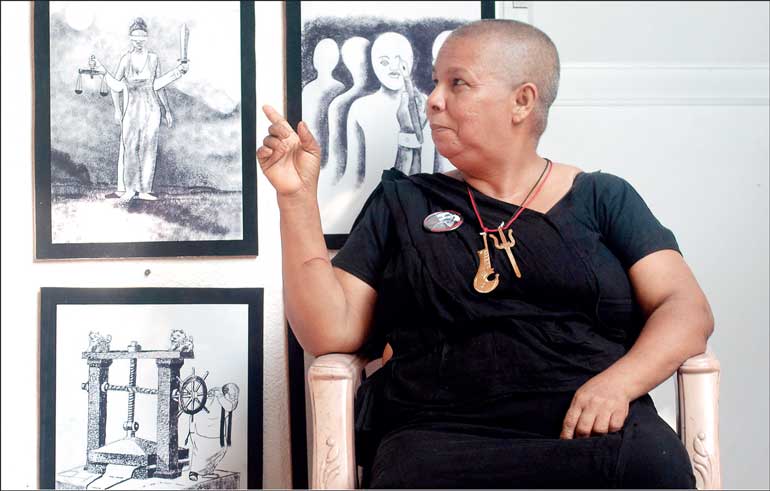 Sandya Eknaligoda is very much the public face representative of thousands of Sri Lankan women who have had a loved one taken away from them in the most cruel manner. She came to the limelight over a decade ago as the wife of cartoonist/writer Pregeeth Eknaligoda, who disappeared on 24 January 2010 and has remained a visible figure over the past 12 years speaking up for herself and on behalf of families of missing persons.

She has faced threats, being targeted by social media trolls, labelled an LTTE supporter and a poster child for Non-Governmental Organisations (NGO)s but through it all Sandya had remained resolute. Last month as she marked the 12th anniversary of her husband’s disappearance, Sandya demonstrated her resolve to draw attention to her plight and this she did in her own unconventional way by making a vow to the Hindu Goddess Kali by shaving her head and swapping the white Kandyan sari she’s worn publicly since Prageeth’s disappearance for a black one.

“What are the options left for a woman engaged in a lone struggle to get justice for her husband who is a victim of enforced disappearance? The options are limited. Kali is a powerful goddess and I have chosen to draw strength from her as I mark the 12th anniversary since Prageeth went missing,” she said in an interview with the Daily FT.

Her seeking divine intervention for worldly problems has been frowned upon by some and some have questioned the reasoning behind such actions, but Sandya is not deterred by her critics.

“I have turned to religion from time to time in the past 12 years as it is one of the few options still left for me. I want to be one step ahead of those who attempt to undermine my work seeking justice for Prageeth and I am determined to be a constant thorn in the side of those in high political office and others who were connected to my husband’s disappearance. I know they fear my actions,” she said. 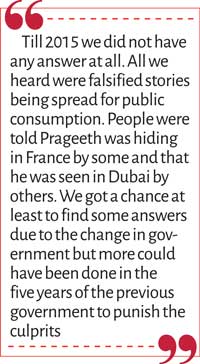 Prageeth Eknaligoda, who was 50 years old at the time he disappeared, had attracted controversy in his lifetime given his no holds barred cartoons depicting the apathy of leading political figures in the country, members of the clergy and the judiciary in addressing social injustices. He was also an equally candid writer questioning conventional ideas and tolerance for injustice in society. On the outer wall of their modest home in a Colombo suburb, Sandya has hung the framed copies of his cartoons, so they are more visible and are a constant reminder of the ills that plague the country.

In addition to his work as a cartoonist and writer, Prageeth was dabbling in politics at the time of his disappearance. He had supported the campaign of the common opposition candidate for the 2010 presidential poll, the former Army Commander Sarath Fonseka and it was for a connected religious ceremony that he left home on that fateful day.

The details of that morning he left the house they had shared for over 15 years since their marriage are well-etched in her mind. “There was a bodhi pooja at the Kelaniya Temple to wind up the election campaign and that morning Prageeth wanted a white shirt to wear. As he could not find one, I gave him the white shirt I had got for 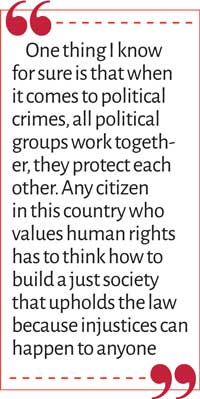 our older son. He put it on quipping with some pride that the boy was all grown up and both father and son could wear the same shirt. Being chronically ill with diabetes, Prageeth had to use insulin regularly. It was Sandya who injected him with the insulin before he left the house that day, never to return.

The writing had been on the wall that there was imminent threat to Prageeth’s life as he had been abducted in November 2009, detained for a few hours and dropped off at a bus stand near their home after being told by his captors he was picked up due to mistaken identity.

“Prageeth knew he was under surveillance after his abduction in 2009. He had heard from a close contact his name was on a hit list and felt that exaggerated claims of him being anti-government or of him being a threat to those in power were being relayed to the authorities and hence feared some harm could come to him,” Sandya said.

Her worst fears came true on that day in late January when Prageeth failed to return home and his phone stopped ringing.

Between 2010 to 2015, Sandya had little information on what had befallen Prageeth. She talked to people who knew him to get as such details as possible of where he was last seen, lodged a missing persons complaint with the Police but no answers were forthcoming from the authorities. Undeterred, with her two young sons by her side,

Sandya began her struggle with the support of human rights organisations and activists.

The first glimmer of hope emerged in 2015 with the change in Government and for the first time those responsible for Prageeth’s disappearance were identified and legal measures initiated.

“Till 2015 we did not have any answer at all. All we heard were falsified stories being spread for public consumption. People were told Prageeth was hiding in France by some and that he was seen in Dubai by others. We got a chance at least to find some answers due to the change in government but more could have been done in the five years of the previous government to punish the culprits,” she said.

The failure for concrete and swift action to deal with cases such as Prageeth’s has meant the little progress made in the investigation have begun to be rolled back with witnesses retracting their evidence and suspects being let off the hook due to lack of evidence in the past two years. This has put Sandya back to square one in her efforts to get justice for Prageeth.

Her constant run in with those in political power and government authorities has opened her eyes to some home truths. “One thing I know for sure is that when it comes to political crimes, all political groups work together, they protect each other. Any citizen in this country who values human rights has to think how to build a just society that upholds the law because injustices can happen to anyone,” she said.

Another reality that has set in for Sandya is that in the absence of a commitment by the state to address the issue of missing persons, people are left to fight their own battles unlike in countries like Argentina

where collective action by citizens, largely women, has resulted in progress for those seeking justice for thousands who disappeared.

“I feel that the mindset of many Sri Lankans is defeatist. I have many people ask me, ‘Why do you want to hit your head against a rock?’,” thus questioning my sanity in talking about powerful forces but if I don’t do what I am doing I will never get justice for Prageeth. Even those who are my biggest detractors cannot wish me away anymore because I have been consistent in my efforts.”

Her goal is to see those responsible for her husband’s disappearance get the maximum punishment possible under the law for the crimes they have committed but she does not advocate the death penalty for them. “I want their lies exposed but I am opposed to the death penalty. No one should get the death sentence for any crime.”

By now Sandaya and her sons have resigned themselves to the fact that Prageeth will never return alive, but she has refused to accept a death certificate in her husband’s name or conduct the last rites as per Buddhist practice by offering pansakoola. “What those who make people disappear should know is that their cowardly actions take away from us the right to conduct the last rites of our loved ones. It is the only way we can find closure. I will conduct Prageeth’s last rites only when they tell me where the remains of my husband are and hand them over to me.”

But she still finds her biggest strength in the memory of her husband. “I draw my strength from Prageeth. With my campaign, I keep him alive every day. He may not be there physically but in my determination to seek justice for him, I keep him alive, and I will continue to do so till justice is meted out. Some may escape the long arms of the law, but the law of nature finally catches up with everyone.”