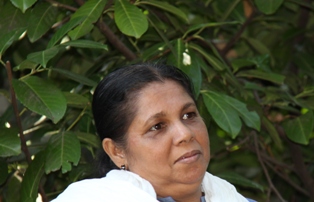 By Bob Dietz/CPJ Asia Program Coordinator
When I first met Sandhya Eknelygoda in May 2010 in her home outside Colombo, she was a distressed mother of two young boys whose husband had gone missing. He was last seen four months earlier, just prior to the elections that returned President Mahinda Rajapaksa to power after the end of the decades-long war with Tamil secessionists. She still has no inkling of the whereabouts of her husband Prageeth, a cartoonist and columnist for the opposition website Lanka eNews (which has since ceased to operate in Sri Lanka because of arson attacks and legal harassmentof its staff, but is maintained overseas).

Over the years, Eknelygoda has emerged as a compelling spokeswoman for Sri Lanka’s disappeared people. Abductions, not just of journalists, have apparently become endemic in the country. The independent Colombo-based news and opinion website Groundviewsposted a report, “A disappearance every five days in post-war Sri Lanka,” and the documentation to support it. (Groundviews has emerged as the most reliable and responsible web resource in Sri Lanka. Given the crackdown on online media, it is one of precious few still in existence.)
For her part, Sandhya Eknelygoda presented a statement in Geneva on August 30, International Day of the Disappeared, at an event organized by the Society for Threatened Peoples. Amnesty International has just recently posted a moving video interview with her on their website.
We have posted a PDF of her powerful Geneva speech, but here are a few excerpts:

I am a Sinhalese, a Buddhist, and mother of two sons. We live close to our capital Colombo. There are many like me in Sri Lanka today, mothers, fathers, husbands, wives, and children of the disappeared. Many of them are from the north and east of the country, where even three years after the war ended they live under a heavily militarized regime. They don’t even have the freedom to cry out in their sorrow.

In the past years, as a law abiding citizen of my country, I have gone to every single place that I could, to seek help in my search for Prageeth–to the Police, to the National Human Rights Commission, to the Courts. I have written any number of letters appealing for help to find Prageeth, including to the President, to the President’s wife, to the Attorney General, to Ministers, and to Members of Parliament. Nobody has taken any responsibility for investigating his disappearance. Nor I have received any other kind of support from any of them.

Sandhya Eknelygoda has moved resiliently beyond the personal pain she and her sons face daily to dedicate her life to confronting Sri Lanka’s broader problems. In her Geneva presentation she also said:

In Sri Lanka today, disappearance has become a social issue. When you hear speakers on any public platform refer to opposition politics, to social issues, to human rights issues, to labor issues, they often end with the words ‘Who knows but I be the next person to be ‘disappeared’ because I spoke for social justice.’ Some social activists have been forced to stop some of their work. Other than a few who are close to the government, most people in Sri Lanka today are knowingly or unknowingly caught up in this new reign of terror.

Bob Dietz, coordinator of CPJ’s Asia Program, has reported across the continent for news outlets such as CNN and Asiaweek. He has led numerous CPJ missions, including ones to Afghanistan, Pakistan, the Philippines, and Sri Lanka. Follow him on Twitter @cpjasia and Facebook @ CPJ Asia Desk