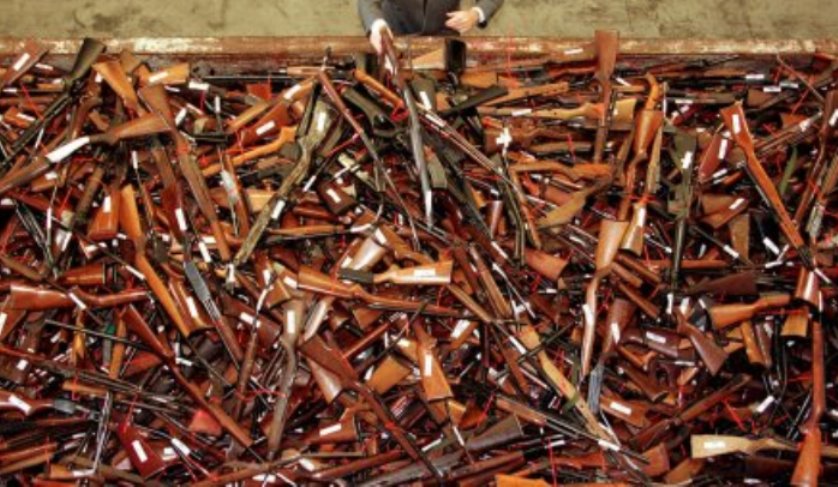 ( Guns should not allow tho dictate politics)

The immediate cause of the fracas in the east involving the chief minister, governor and naval officer was personal pique. That incident has been sought to be politicized by an opposition that is ever mindful of the power of inter-ethnic mobilization of nationalism. They have warned of the undermining of the security forces of the country by the ethnic and religious minorities. The fact that it was a Muslim chief minister who spoke offensively in public to a naval officer from the predominantly Sinhalese security forces was given full play by the opposition that had once exploited narrow nationalism to win successive elections, and endeavour to continue in the same way. Former president Mahinda Rajapaksa even sought to draw a link between this incident and another recent one, in which TNA leader R Sampanthan entered an army camp with some of his supporters to inspect land that had been taken over from civilians during the war.

In both cases exaggerated ethnic interpretations have been given to make it appear to the wider population as if national security is being put into jeopardy by the aggressive behaviours of the ethnic and religious minorities. In the case of the alleged gate crashing into the army camp, the TNA leader has explained that the army officer on duty had not objected to his entry into the outer precincts of the army camp to inspect land that his party supporters had claimed was their own, but which had been taken over as high security zones that the government has promised to return, and which has yet to be returned. The over-centralisation of power, the undermining of devolution of power and the use of the military to take over civilian spaces are both the cause and consequence of the three decade long war.

The root cause of both incidents does not lie in inter-ethnic antagonisms. On the contrary, as the recent flood relief efforts show to which the Muslim community contributed visibly and generously, the day to day interactions of the different communities with each other are largely constructive and positive. The problem lies in the post-war continuation of centralized and militarized structures of the state that denies the rights and due status of those who live and represent the people of the Northern and Eastern provinces where the ethnic and religious minorities predominate. It is these structures that the government is now seeking to reform, both through the transitional justice process of implementing the promises it has made in the Geneva resolution, as well as through constitutional reform.

The Eastern Province chief minister’s outburst at the school event in Sampur was directed against both the naval officer and governor who are representatives of the central government. Sampur has been an area of contestation with land in the area being taken over by the navy as high security zones and the school itself being supported by the navy as a special case. From the chief minister’s explanation it appears that he had felt slighted as he had not been formally invited for the event and not been given a seat in the helicopter in which brought both the governor and US ambassador to the event, along with several others. The final blow to him was when he was not invited to the stage where all the other dignitaries sat. It was his effort to get himself to up on to it that set the stage for the showdown in which he used offensive language.

The marginalization of the chief minister at the school event was a consequence of the domination of the institution of the governor over that of the chief minister in the Northern and Eastern provinces. During the long period of war and continuing into the post-war period, the security forces have had a major role to play in the governance of these two provinces which were the site of war. The security forces continue to remain there in large numbers despite government pledges to demilitarize the two provinces in the aftermath of the war. There undoubtedly has been a significant degree of demilitarization, but the process is far from complete. Although schools come under the provincial council headed by the chief minister, it appears that in the case of this school in Sampur, the navy had a special role.

The passage of seven years since the end of the war makes it necessary for the government to re-assess the active role of the security forces in civilian life in the Northern and Eastern provinces. The fundamental asymmetry in power relations between those who are legally entitled to carry weapons and those who are unarmed is the reason why democratic societies maintain a strict distance between the military and civilian population in times of peace and normalcy, which is what Sri Lanka has achieved today. The role of the military in civil affairs is usually restricted to times of emergency, such as occurred during the recent floods and earthslip disasters, where the military performed an exemplary service and carried out several successful humanitarian operations. Seven years after the end of the war segregation of the military from the civilian population relevant to peace time is what needs to happen in the Northern and Eastern provinces.

The second area where change needs to happen is with regard to the devolution of power. According to the present constitutional arrangement the governor of a province has overriding powers that can be used to block decisions of the chief minister and the provincial councils. This may have been deemed necessary during the time of war, when national security took priority and the Northern and Eastern provinces were the site of the separatist war. However, the power sharing arrangements that were appropriate to a time of war need to be changed to be relevant to a time of peace. While traditions of protocol would give priority to the governor, the elected chief minister would also need to be given his due place. The balance of power between the governor and chief minister needs to be shifted in favour of the chief minister for the devolution of power to be effective.

Third, there also needs to be a change in the political culture in the direction of good governance. It is not good governance when the navy takes a decision by itself not to attend any event attended by the chief minister and the Defense Secretary announces that the security forces will follow suit. On the one hand, this declaration may have helped to forestall those in the political opposition who wish to exploit the issue to mobilize narrow ethnic nationalism even to the detriment of the national reconciliation process. But this decision of the navy is also in breach of the principle that the military is under civilian control and is not an independent actor in making decisions that are essentially political in nature. On the other hand the navy has accepted that their commander in chief, President Maithripala Sirisena will make the final decision, as befits a democratic state.

The present government was elected to power on the basis of its promise of good governance and non-discrimination to all sections of the population. These principles need to be applied to all levels of the polity, including the provincial level, so that no section of the population feels neglected by those who are entrusted with the powers of governance. This applies to provincial councils and to chief ministers, as much as it applies to the central government. There have been reports of the chief minister favouring one community over the others in utilizing the provincial council which has caused stress with the governor to whom the other communities appeal. The ingredients of good governance also include treating others with respect even under conditions of stress, which the chief minister signally failed to do, and which the naval officer succeeded in doing when he did not attempt to respond in kind to the chief minister’s intemperate outburst.