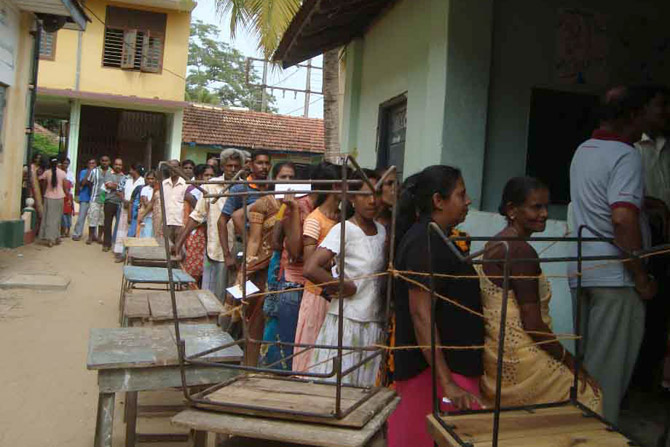 (Text of a press communique issued by the Tamil National Alliance)
Following on an invitation from Mr Lalith Weeratunga, Secretary to the President to the TNA leader Mr. R Sampanthan on the night of 1th September 2012, for a meeting at the Presidents House on 18th morning, a meeting took place between the President and Mr. Sampanthan as arranged. Ministers Maithripala Sirisena and Prof G L Peiris were also present at the meeting.

The President congratulated Mr. Sampanthan on coming a good second at the Eastern Provincial Council Elections and Mr. Sampanthan stated that if the Elections had been free and fair the TNA would have come first.

Mr. Sampanthan further stated that as per the mandate received by the TNA and the SLMC, the TNA invited the SLMC to form a government and offered the SLMC the Chief Ministership. The UNP would have backed such an arrangement.

The President responded by stating that he was quite prepared to sit in the opposition and indicated this to the SLMC and also referred to the offer made by the TNA to the SLMC. He however stated that now things were finalized.

Mr. Sampanthan stated that the eleven members elected to the Eastern provincial Council from the TNA should be able to function freely and independently and without any deterrence or discrimination. lf this did not happen it would mean that the Tamil people were being punished and that this should not be allowed.

Mr. Sampanthan also stated that five of the elected Provincial Council members from the TNA were approached and_ harassed with offers of vehicles, houses, money and contracts to cross over to the Government and that the Telephone numbers and vehicle numbers of these persons, believed to be military intelligence personnel, were available.

The President initially denied this but later agreed to look into the matter. Mr. Sampanthan also raised the question of resettlement in Sampur and in Valikamam and the appointment of civilians as Governors of the Northern and Eastern provinces and the appointment of Tamil speaking civilian officials as Government Agents of Trincomalee and Ampara.

The President responded by inviting Mr. Sampanthan to attend the Parliamentary Select Committee and stated that these matters could be addressed when that process commenced.

Mr. Sampanthan responded by stating that the TNA has never taken up the position that it will not attend the PSC, but has only insisted that commitments made must be implemented before attending the PSC sessions.

It was agreed that this matter would be further pursued on the return of the President from his visit to India.