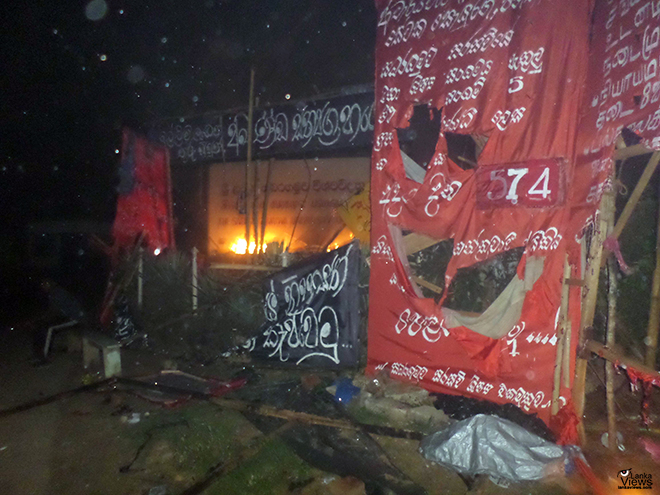 [Burned shed of the students’ protestors]

A  gang of thugs lead by a UPFA Member of Pradeshiya Sabha called Indika has savagely attacked students of Sabaragamuwa University while they were engaged in a ‘Sathyagraha’. Thugs armed with poles and swords had arrived at about 10.30 last night inhumanly assaulted the students and set fire to the temporary shed they had put up at Pambahinna Junction near the University.

There had been several groups of police officers on duty but they had not been able to control the situation.

The Minister of Higher Education who had come to the university a few days ago too had threatened students stating he would have taken stern action if not it was time an election would be held.

It is said that the UPFA PS Member who lead the gang of thugs is a very close associate of Minister S.B. Dissanayaka.

The convener of Students Collective of Sabaragamuwa University Rasindu Jayasinghe speaks to the media: Lanka Truth