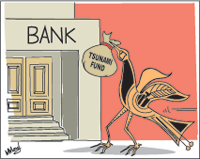 The Sri Lanka Rupavahini Corporation, the country’s national television network with the widest outreach, has caused raised eyebrows among Parliamentarians in the Committee on Public Enterprises (COPE), the watchdog body that monitors finances in the state sector.
The reason will no doubt raise many an eyebrow among the public too. The SLRC called for public donations after the devastating tsunami in 2005.
That was to help tsunami victims among others, a laudable public-spirited exercise. Many school children broke open their small savings in tills to pay for tsunami relief work. Their ilk worldwide did the same and sent their savings through different charity organisations to Sri Lanka.

Rupavahini instead deposited the money in fixed deposits, call deposits and in ordinary bank accounts. Members of the public, both the rich and the not so rich, moved by the devastation the tsunami caused, had poured in Rs. 32,544,374. In 2008, the SLRC even earned interest to the tune of Rs. 924,000.

This, according to the Auditor General, is without “taking action to transfer” the moneys to the “President’s Fund for Disasters.” The AG notes that from this amount, the SLRC later paid five million rupees to the Api Venuven Api Fund and another five million rupees to “the National Project guiding (sic) to the Uthuru Mithuru Yal Devi.”
No questions have been asked and no answers have been given on who has been responsible for this act. An opposition member in the COPE described it as “legalised highway robbery.”

Another reference by the Auditor General relates to the monies owing to the Rupavahini from the main constituent party in the ruling alliance – the Sri Lanka Freedom Party (SLFP). This is what is said in an intriguing paragraph: “(the) Sri Lanka Freedom Party has paid a sum of 42 million rupees, which was due from them for election activities. Steps have been taken to obtain legal advice from the Attorney General in order to recover the outstanding amount related to election activities.”

Here is what is behind the news: It seems that even the Auditor General is now self-censoring. No reference is made to the balance amount due to Rupavahini from the SLFP.

A footnote worthy of mention says, “According to past experiences (sic) it seems there is no demand from the public for annual reports. Hence copies of the annual report have not been submitted to be bought by the public. If a request is made by someone who needs a copy steps will be taken to provide it to him.”

Whoever put together those words in the SLRC report did not realise that there is a legal requirement to publish annual reports. It was done with the express purpose of ensuring there is both transparency and accountability. Nowadays, who cares, anyway?
ST