Rules changed for the benefit of one more Rajapkasha 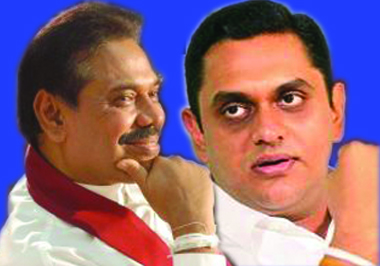 Shashendra Rajapaksa, the nephew of President Mahinda Rajapaksa and son of the Speaker Chamal Rajapaksa, has been given the opportunity of continuing as the Basnayake Nilame of Ruhunu Maha Katharagama Devalaya through an extra special gazette No. 1807/39 issued on 15th March without any election.
The gazette with the signature of Prime Minister D.M. Jayaratne has exempted Ruhunu Katharagama Devale, in which Chief Minister for Uva PC Shashendra Rajapaksa is the Basnayake Nilame, from clause 12  (a) of Buddhist Viharas and Devalagam Temporalities Act which states that the period a person could hold the post of Basnayake Nilame could be extended only by two years.

According to Buddhist Viharas and Devalagam Temporalities Act  A Basnayake Nilame could be in the post for five years since the day he is appointed and the President could extend his term for two years if he is found efficient.
The extended period of Mr. Shashendra Rajapaksa after his normal period of five years ended on 15th March. The Prime Minister has issued the aforementioned gazette when an election to the post was due.

Shashendra Rajapaksa as the Basnayake Nilame of Ruhunu Maha Katharagama Devale was not eligible to hold the post of chief minister of Uva PC. However, through an extra special gazette of 1614/30 dated 14th August, 2009 President Mahinda Rajapaksa exempted him from clause 14 (a) and (b) of the Buddhist Viharas and Devalagam Temporalities Act.

Ruhunu Maha Katharagama Devalaya is one the religious places in Sri Lanka that earns millions daily as contributions from devotees.