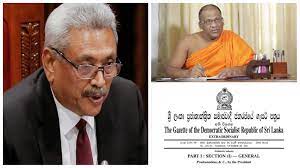 Ceylon Today, through the RTI (PS/RTI/04), requested the Presidential Secretariat to release the report ‘One Country One Law’, which has been declined under the RTI Act clause 5 (i) and 5 (ii).

The RTI revealed the funds were allocated through the Consolidated Fund to study and compile the report.

The RTI also informed that the recommendations made by the ‘One Country One Law’, chaired by Ven. Galagoda Aththe Gnanasara Thera, have not yet been implemented.

Ceylon Today filed several questions under the RTI request including what recommendations, the Presidential Task Force team had finally drafted on the ‘Thesa Valamai law’, ‘Kandyan land law’, ‘marriage and divorce law’ and also the ‘Muslim marriage and divorce law’,  how much each of the 13-member Presidential Task Force were paid for this job, how many Government vehicles were released for the job, how many persons they met to have discussions with and who they were,  how many letters of complaints or suggestions they had received from the public and whether the incumbent Government dismissed or rejected the report completely.

In October 2021, President Rajapaksa appointed a 13-member Presidential Task Force to study the implementation of the concept of ‘One Country, One Law’ and to prepare a draft Act. Later, on 27 May 2022, he extended the tenure of the Task Force by three weeks, to ‘complete the task assigned’ to it, according to a Gazette issued.

The report was finalised within one-year and was handed over to Rajapaksa in June 2021.