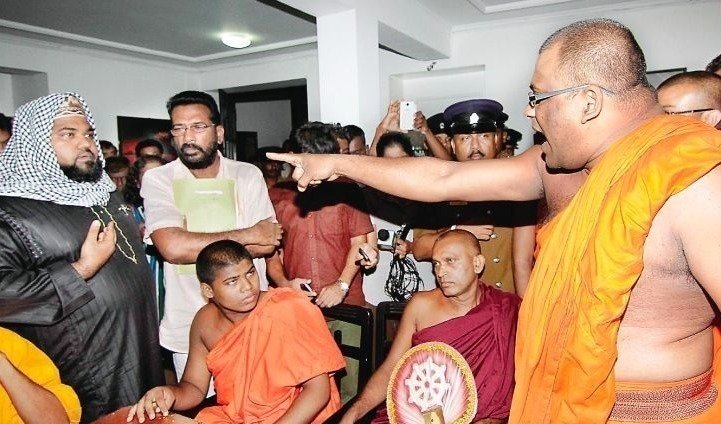 Writing a letter to President Rajapaksa, detained MP Rishad Bathiudeen’s wife says that “the PCoI report had found Gnanasara Thero and his activities as one of the main reasons behind the scene for this attack. But still, neither he nor the others who were identified as responsible for the attacks as per the report have been arrested or investigated.”

And it further says that “before Zahran Hashim, the extremist who led the terrorist mission on Easter Sunday two years ago, exploded himself, he made a video identifying 10 reasons why the attacks happened in Sri Lanka. We believe eight of those reasons must be addressed.”

Full text of the letter:

I am forwarding this appeal to your Excellency on account of the grave agony and intense drama that had been caused to me and my children by reason of the unlawful and unjustified arrest of my husband Hon. Rishad Bathiudeen M.P.

On 24th of April 2021 that is during the Holy month of Ramadan, at around 3.00 a.m, the Criminal Investigation Department (CID) suddenly descended on our house and arrested my husband.

At that time no reason for the arrest was furnished. On inquiries, we have since become aware that it is alleged that my husband had been privy to telephone calls between the then Additional Secretary (Industrial Development) Mr. Balasubramaniyam of the Ministry, then headed by my husband as the Minister of Industry and Commerce and also in respect of calls said to have been made by Inshaf Ahamed to Mr. Balasubramaniyam.

I wish to bring to Your Excellency’s attention the contents of the Gazette bearing No. 33/24 of 27th of April, 1979 in terms of which the power to issue licenses for the export of scrap metal was vested in the Secretary to the Ministry.

Licenses were issued to two other companies apart from Colossus (Pvt) Ltd. At the time, Colossus (Pvt) Ltd had been operating for seven years. Nobody had any suspicion at the time that the owner of Colossus, Inshaf Ahamed would turn out to be a suicide bomber. Mr. Ranjith Asoka and Mr. Balasubramaniyam had only granted the licenses in the course of their duties, and not otherwise.

Since the Easter attacks, my husband had vehemently condemned the terrorists and the bombings. However, when fingers were pointed at him, and when there was a demand by certain groups for the resignation of my husband, he resigned with dignity and fully cooperated with investigations. The Acting IGP of the time, who is the present IGP, Mr. C. D. Wickremaratne, carried out a thorough investigation on the matter.

The investigating authorities had asked the general public through the media to come forward with any complaint or allegation against my husband. A special investigation unit was appointed to investigate the allegations, and upon its conclusion, the SDIG of CID issued a report confirming that my husband was innocent of all charges.

Further to this, a Parliamentary Select Committee (PSC) was appointed to investigate the Easter attacks. The Joint Opposition of the time also presented a No Confidence Motion against my husband placing 10 allegations. The issue claimed to be under investigation today is one of those allegations. All allegations were investigated, and again my husband was exonerated of all charges.

A Presidential Commission of Inquiry (PCoI) was also appointed by former President Maithripala Sirisena, comprising of 5 members under the Chairmanship of Justice Janaka de Silva. My husband and his brother appeared before the Commission. Attorney-at-Law Sameera Silva was authorized on behalf of His Eminence Cardinal Malcolm Ranjith to question my husband and his brother.

After a lengthy investigation, upon the conclusion of the report, no charges were framed against my husband.

No Connection with the Easter  attacks

My husband has been a Parliamentarian for 20 years. He has been a compassionate Leader particularly in the context of the hardships and afflictions arising from the ethnic conflict. No allegation was ever proven of a connection between him and the Easter attacks. In such circumstances, as Your Excellency would no doubt agree it is unfair to arrest him in such a disgraceful manner without a Court order, without a warrant or the consent of the Speaker. It is equally unfair to arrest him under the Prevention of Terrorism Act (PTA) in such a manner when he had fully cooperated with all investigations on the matter.

I wish to also bring to your Excellency’s notice that, on April 14th 2020, my husband’s brother, Riyaj Bathiudeen was arrested under the PTA. He was arrested along with six others. Three of those arrested with him were discharged before him. He was detained for nearly six months and acquitted by the Fort Magistrate along with the other three persons who had also been arrested as there was no evidence to implicate any one of them. He too has since been arrested on the same day as my husband without any cause whatsoever.

Furthermore, the PCoI report had found Gnanasara Thero and his activities as one of the main reasons behind the scene for this attack. But still, neither he nor the others who were identified as responsible for the attacks as per the report have been arrested or investigated.

Before Zahran Hashim, the extremist who led the terrorist mission on Easter Sunday two years ago, exploded himself, he made a video identifying 10 reasons why the attacks happened in Sri Lanka. We believe eight of those reasons must be addressed. They are:

An incident in Kuliyapitiya where an image of a pig with Allah was written on it.

Galagoda Aththe Gnanasara Thera claiming that Allah will be reborn.

Tearing and burning of the Quran.

Destruction of houses of Muslims and forcible land grabs.

Rape of a Muslim woman by intelligence officials and its cover up.

We must say that we cannot accept his actions of terrorizing innocent people. However, these eight reasons are important for us to consider to make sure communities are not provoked. The intelligence officials of Sri Lanka know this. If they wished to stop the attacks, they could have, but they didn’t. If certain public security officials and other relevant people would have acted wisely, the Easter attacks could have been prevented. However, they continued to provoke and by their actions of brainwashing, over 270 lives were lost.

Considering the above, I urge your Excellency to take into consideration these facts and direct the Attorney-General to issue an order to release my husband and his brother. I assure your Excellency their fullest cooperation in regard to any investigations.