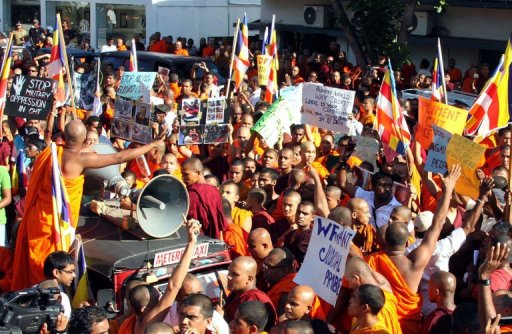 Raashid Riza
The last few months have seen a rapid increase in anti-Muslim sentiment amongst sections of the political class in Sri Lankan society. The situation has yet to deteriorate to the extent that the default image of a Sri Lankan Muslim is one represented by an anti- Sri Lankan or anti-Buddhist element. But the trend that is developing is truly alarming and surely points towards such an inaccurate mental image.

The rise of extremist Buddhists in Sri Lanka is truly disturbing and does not bode well to the sense of national resilience that the government is trying to foster, at least in its rhetoric.

There is to be a protest march in Colombo today that is supposedly against ‘Islamic Extremism’. The leaflet however, unable to find tangible examples of Islamic extremism in Sri Lanka, instead highlights international examples.

The leaflet was first tweeted by Groundviews and was then picked up by other bloggers. The language used in the leaflet is particularly confrontational and is written in jargon generously peppered with phrases such as ‘enough of being silent’ as a precursor to the more confrontational language that follows.

The leaflet speaks of numerous instances where it alleges that Islamic extremism has acted malevolently towards Buddhists and Buddhist holy sites in many parts of world, including in Burma, Thailand, Afghanistan and even the eastern parts of Sri Lanka. The leaflet is clearly designed to fuel the ignorance of the apolitical (usually innocent) Buddhists against the Muslims and is therefore composed of materials that are innate historical inaccuracies at best and factually vacuous at worst. It specifically refers to the recent incidents in the south of Bangladesh where there have been attacks on Buddhists by groups of Muslims. Of course nowhere is the ethnic cleansing of Rohingya Muslims by Buddhist extremists in adjacent Burma mentioned.

The last paragraph of this leaflet quite explicitly states something on the lines of; it is time to show that this (Sri Lanka) is a Buddhist country by word and deed; many have forgotten that this is a Buddhist country, this notion should be reawakened. Extremists should be struck down as they flee. When cruel Islamic extremists prey on other innocent Buddhists, and when the entire world remains silent in the wake of it, it is time that we reawaken our race (Sinhala Buddhists) to respond to this.

The implications of the call to “reawaken” invoked in this context is particularly disturbing.

What these Buddhist extremists seek to achieve for the alleged benefit of their Buddhist compatriots abroad remains to be seen. For Buddhists who feel that they are persecuted in other parts of the world, this exercise by minute sections of the Sri Lankan Buddhist community will be futile. Surely the Buddhist leadership in Sri Lanka is intelligent enough to grasp this fact. What exactly then does this exercise seek to achieve? The result of these sorts of protests (yes, plural, this is to be one of a series of protests) are multiple.

Sinhala – Muslim relations have always been cordial and strong. The current generation of Sri Lankans cannot easily be buoyed into buying an argument that Sri Lankan Muslims are a bane on the nation’s social fabric. Buddhism as a faith has thus far survived the vulture-esque assault by sections of a largely secular media that paints most religious faiths as violent, something that protests such as these threaten to undo.

Moreover, Sri Lanka is rebuilding itself as a nation after decades of conflict that not only curtailed and stunted growth but also damaged it. Creating an environment that will marginalise Muslims can sow the seeds of future conflict.

Yesterday, the All Ceylon Jamiyathul Ulema (ACJU), the main decision-making theological body for Sri Lankan Muslims, released a media communiqué condemning the attacks on Bangladeshi Buddhists. The wisdom of releasing this communiqué is certainly questionable.

Whether the ACJU has released statements for similar causes previously is anybody’s guess. There is no doubt that the body acted in the best interests of Sri Lankan Muslims and of Sri Lanka as a whole. Yet the timing or indeed decision to make such an overture seems hasty.

The despicable acts on Bangladeshi Buddhists have absolutely nothing to do with Sri Lankan Muslims. However, such a press release can create the impression amongst wider Sri Lankans of a sense of guilt amongst Sri Lankan Muslims when there is none due to there being no grounds for guilt.

Additionally, the release of such a statement can institutionalise the necessity to release communiqués almost every time a Buddhist place of worship is attacked anywhere in the World, thereby creating an undue burden of responsibility.

Now, replace the word ‘countries’ with ‘communities’ in the paragraph above, and see how it reads. The roots of extremism rest in vested interests of various interest groups as much as it does on the absence of law & order and the socio-economic state of the parties in conflict. The Sri Lankan economy at the grassroots is in turmoil and the Sinhalese community, as the larger ethnic group, is the most affected.

An economically weak nation with near bankrupt sections of the public can foster groups that are represented by intellectually bankrupt individuals who posture as leaders at a local or national level patriotism for their ends. As Samuel Johnson wrote, “Patriotism is the last refuge of the scoundrel”. One only need observe a group of scoundrels against a group of self-confessed patriots to realise that there is too often much in common.

The 1915 riots are commonly known as the ‘Sinhala – Muslim’ riots, not by the name of individuals. The way in which the Sri Lankan Muslims react now will determine how history will testify for or against them. In the future, no matter what the political situation in Sri Lanka, the Muslim community will continue to exist in every strata of society.

Muslims in Sri Lanka are living in politically perilous times; they reside amongst a largely accommodative Sinhalese and Tamil population, apart from the odd elements that opportunistically seeks to whip up racial tensions. In the short term the Muslims should act prudently and actively within the framework of Sri Lankan law. They would do well to deal indifferently towards bankrupt extremism and not dignify it by seeking to confront it, except with a pragmatism that respects legal and constitutional norms.

COLOMBO — Protesters threw stones at the Bangladeshi embassy in Sri Lanka on Thursday as saffron-robed monks demonstrated against Muslim mob attacks on Buddhist temples in Bangladesh.
A crowd of about 500 monks and supporters marched to the Bangladesh High Commission (embassy) and handed over a petition condemning Sunday’s attacks against Buddhist temples in the coastal region of Cox’s Bazaar, witnesses said.
Windows of the mission were smashed before police moved in to disperse the protest, which blocked several road junctions in the capital Colombo.
One man was arrested for criminal damage, police spokesman Ajith Rohana said, adding that monks were not involved in the attack.
“We were tolerant, but day by day we notice great injustice caused to Buddhists by Islamic extremists,” Buddhist monk Galagoda Gnanasaara said in a statement. “We can no longer be patient.”
The violence in Bangladesh began on Saturday night in the southeast of the country and spread to several towns and villages after claims that a young Buddhist man had posted Facebook photographs defaming the Koran.
At least 11 temples in Cox’s Bizarre were torched and seven were damaged or ransacked. Police said 25,000 Muslims were involved in the riots.
Bangladesh Interior Minister Mohiuddin Khan Alamgir has blamed radical Islamists for the violence.
Monks in the Thai capital Bangkok also held a protest on Wednesday.