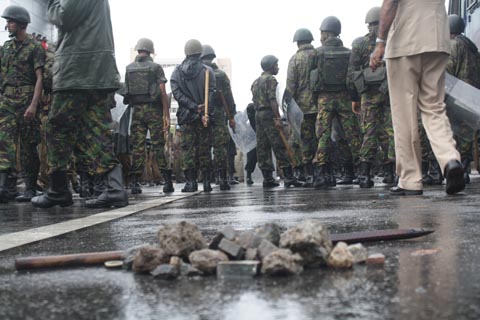 The police anti-riot squad yesterday fired tear gas and used water cannon to disperse a protest march by undergraduates. Five police personnel were injured when some of the protesters pelted stones.
Thousands of undergraduates gathered opposite the Fort Railway Station and commenced their protest march demanding that all universities be re-opened, problems faced by the university teachers and non-academic staff be solved, education privatization plans and the Malabe Private Medical College be abolished and that all students affected by the Z–score mess-up be admitted to universities.

The march organized by the Inter University Students’ Federation (IUSF) led by JVP dissidents brought traffic to a standstill. It was proceeding towards Temple Trees when the riot police descended on the protesters dispersing them near the Telecom Junction.

Police spokesman SSP Ajith Rohana said that the police had been compelled to use tear gas and water cannon to disperse the protest as undergraduates had turned unruly and started pelting stones.

Five police constables had been injured in the attack, SSP Rohana said.
by Dasun Edirisinghe
IS