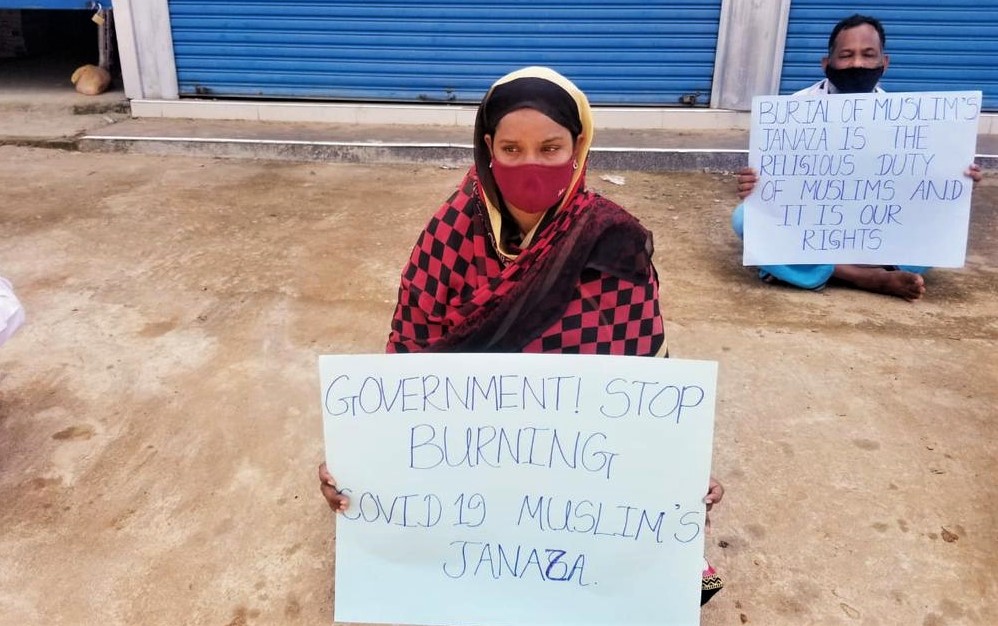 On 24th February, after the Interactive Dialogue on Sri Lanka at the UNHRC when the burial issue dominated discussion of Sri Lanka’s respect for minority rights, the government quickly announced lifting the ban on the burial of COVID-19 victims. Imran Khan was bowled a gentle full toss, enabling him to effortlessly clear the ropes and play the master stroke maker, enhancing his wooing of the Islamic countries for their votes on 22nd or 23rd March at the HRC. But the structural racism that took centre stage in cremating the Muslims deceased cannot easily be put back in its place, because it is now part of our state. For many families of victims, it is still a nightmare running from pillar to post trying to prevent the cremation of their loved one’s bodies. Once again, the infamous technical committee has raised its ugly head in delaying the burial guidelines reiterating its fictitious argument of ground water contamination.

To get their right to burial back it seems the Muslim community must say goodbye to another right they had enjoyed. Minister Ali Sabry is the arbiter of this rights exchange, and it seems once again it will be Muslim women who will have to pay. Their right to wear Niqab (face veil) is on the chopping board at a time when wearing masks is compulsory for everyone. Apparently, for security reasons, Muslim women should remove their Niqab.

The burial issue is still a nightmare, and it is part of a continuity of attacks on minority communities. We are now asked to settle to bury the bodies in Iranaitheevu – a small island off the north-west coast with no land access. This island was originally inhabited by Tamil Catholics who were displaced due to war. After a 25 years struggle they returned to the island in 2018.  Still the Navy occupys part of this island and only certain parts of the coast are open to residents to do their fishing activities. Covid burial means the authorities are going to control this island, depriving the returning Tamil catholics of their one and only livelihood – fishing. Remember that the technical committee head Dr. Channa Perera told the BBC that Covid bodies can be used as biological weapons. Burials can now be used as an excuse to intensify Navy occupation on Iranaitheeva. We Muslims do not want our burial rights at the cost of a very poor community being unable to fish and live a dignified life.

Move to pitch the Muslims once again against the catholic community

This is also a move to pitch the muslims once again against the catholic community. Prof Jennifer Perera’s committee clearly said that in each district there can be identified burial site. Why should the community pay for all of this spiteful decision of a few whose thirst for cruelty has not yet been quenched, even after forcefully cremating over 250 Muslim’s bodies?

Remember DG health wrote to Minister Ali Sabry for freezer containers not so long ago and community paid and bought them all. Later, the health authorities by obtaining court order to cremate cleared up the strain created by victim families by not consenting to the cremation and leaving the bodies. Within a week since the bodies were kept in the freezers, they cremated all the bodies without any shame. Here too the authorities made Muslim communities’ rich men to pay to defuse the poor victim families’ resilience.

Not a stand-alone attack of the rights of Muslims

This is all now a political drama. They have already contracted parts of three islands off Jaffna to China for electricity generation, and now Iranaitheevu is going to accommodate burial rights to satisfy Pakistan for its support at the UNHRC. At the informal dialogue on the draft resolution Pakistan kept up its end of the deal, hinting at the government’s coming change of tune. At the negotiations on March 2nd the Sri Lankan ambassador asked for a paragraph to be deleted from the resolution because it refers to forced cremations, which are no longer taking place. Do they think international community is so blind? They cremated the 1st Muslims out of hate on 31st March 2020, justified it with lies about ground water contamination, and now even as they pretend to show moderation and compromise they expose their hate by choose Iranaitheeva.

Well, the burial issue should not be treated as a stand-alone attack of the rights of Muslims. It is only the worst and latest manifestation of something that’s been brewing for a long time here- a majoritarian polity that is built purely on violent and militarised Buddhism. The sharp claws of the lion are on our neck.