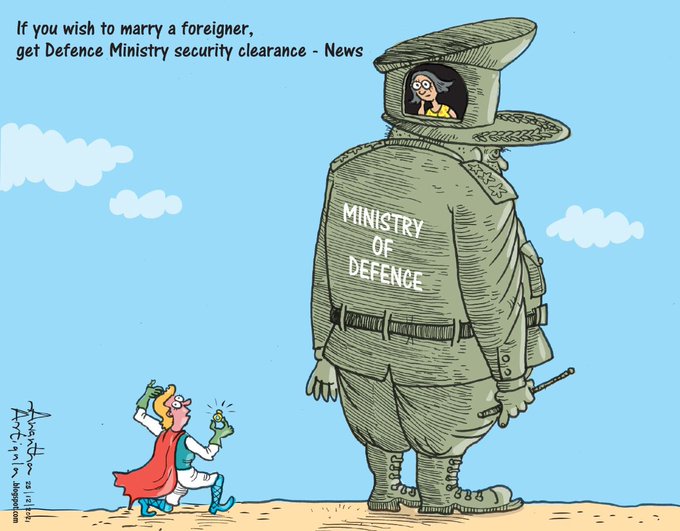 According to media reports, the Registrar General has issued a circular requiring a Sri Lankan citizen intending to marry a foreigner to obtain the prior permission of the Ministry of Defence. The Government has not denied the reports. In fact, the Minister of Public Security has justified the change.

Under the new circular, a foreigner who intends to marry a Sri Lankan must produce his/her medical reports and a report from the Police that s/he has not been convicted of an offence during the previous six months.

The right of even convicted prisoners to marry has been universally recognized. How then could a state prohibit a person guilty of a crime from marrying? Medical reports are matters of a personal nature. How could a state consider such a report as being relevant to marriage? Is it not ridiculous that a country that permits an American citizen to be President, Prime Minister or Minister imposes restrictions on foreigners to marry Sri Lankans? What would the situation be if a Sri Lankan marries a foreigner while being abroad and returns to Sri Lanka with the spouse?

The Rajapakse regime has resorted to the argument of ‘national security’, which has often been used to impose harsh laws, to justify the nonsensical and anti-human rights restrictions on marriage. This is yet another repressive law often used by fascistic regimes to curb civil rights.

No civilized state imposes such restrictions on a matter of a personal nature such as marriage. It is the person concerned and not the state who should decide whom s/he should marry.

The ridiculous nature of this requirement is manifest when the law permits a Sri Lankan over the age of eighteen years to marry without the consent of parents but requires the permission of the Ministry of Defence which is under the President, to marry a foreigner.

The International Network for Sri Lankan Democracy (INSD) sees this as another step in pandering to extremist Sinhala Buddhists who condemn people of other cultures and faiths and treat them lowly.

The appointment of a former Navy Commander who is a suspect in a case involving the abduction of thirteen children as the Governor of the North-Western Province and the head of the extremist Bodu Bala Sena accused of anti-Muslim riots as the head of the Presidential Task Force on ‘One-country, one-law’ also are dangerous steps in the same process.

In short, the new circular is not an isolated one but another anti-democratic step of the Rajapakse political project to stay in power.

The International Network for Sri Lankan Democracy (INSD) urges the Government to revoke the new circular restricting the right to marry, which is a right of a personal nature and calls upon all democratic forces to oppose this unjust circular.