Review: ‘Sri Lanka’s Secrets: How the Rajapaksa Regime Gets Away with Murder’

‘Sri Lanka’s Secrets: How the Rajapaksa Regime Gets Away with Murder’ by Trevor Grant, is a powerful book, containing many details that will inform, energise and enrage even those who are familiar with Sri Lanka, let alone those who are new to understanding the issues that continue to fester on this island. Trevor Grant’s contribution to the literature on Sri Lanka should be compulsory reading for everyone interested in Sri Lanka. His extensive research, access to individuals willing to talk, and ability to tie individual stories back to a bigger argument make this a very powerful book.

The layout of the book – as a visual and verbal presentation of the evidence of the crimes committed in Sri Lanka – is compelling. Though the pictures and facts will be familiar to many, the presentation and their gathering together in one place is a valuable contribution. But even more compelling is the personal stories of those who lived through the horrors – and continue to suffer the effects. Part 2 should be compulsory reading for everyone – even those who think they know everything about Sri Lanka. Grant’s ability to extract detail from his interviewees and then present it back factually is profound. And the factual presentation only reinforces the horrors suffered by Thomas, Anna, Maravan, Kumar, Sugi and Selvan. Their courage in sharing their personal horrors, combined with Grant’s ability to convey their pain in a few words, make these three chapters a powerful testament to both the human ability to carry on, and the human capacity for one person or a group to inflict unimaginable suffering on another. 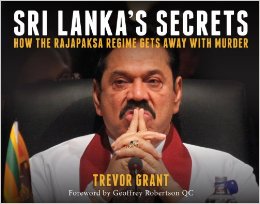 The structure of the book is well thought out and engaging. The combination of individual case studies in part 2, focus on the war zone in part 3 and thematic focus on children, women and the elderly in part 4 combine to provide multiple entries into the individual and real experiences of the Tamil population. These, combined with the focus on the Australia-Sri Lankan relationship in parts 1 and 5 which serve as bookends to these horrors, makes for a book that makes its case strongly.

Written from Australia, the book has a very strong focus on the relationship between the two countries. It is highly influenced by the circumstances at the time of writing such as Australia’s response to ‘the boats’, the internment of asylum seekers off-shore and the powerful domestic frame within which turning the boats away is more important to Australia than concerns about human rights. This makes a contribution to the literature on Sri Lanka as the bilateral relationship is rarely examined.

There are a few issues with the book that also need to be acknowledged. In seeking to make some of the broader arguments, the author relies on the language of assertion rather than the data at hand. Though there is very compelling data, it is sometimes overwhelmed by the assertions made.

In seeking to cover a vast expanse relating to the island and suffering, the book could be in danger of losing a compelling presentation by attempting to tie it to a bigger argument. In places the book is a documentation of events and experiences. In other places it is a polemic against the atrocities of the Sri Lankan state. This may prove to be a deterrence for those who want to learn about Sri Lanka. Thus the book may end up preaching to the converted – to those actively engaged in Sri Lanka and already aware of most of the facts. This is not to argue that even those very actively engaged in Sri Lanka cannot gain from reading this book, but rather to suggest that a wider audience may be missed.

Also, while the focus on Australia, and the relationship between Australia and Sri Lanka makes this a unique book, this too may impact on the readership. To those familiar with Australian life and politics, the discussions about Packer, Gillard, Carr, etc. are detailed and provide fascinating insight into the domestic and corporate concerns in Australia’s policy towards Sri Lanka. But to those unfamiliar with Australia – who perhaps read it from a Sri Lanka perspective – these passages could prove hard to grasp due the author’s presumptions that the reader is familiar with these personalities. But on the other hand, the failure to make it clear that Australia too is a central concern of the book – there is only a reference in the last sentence on the back cover – means that a readership mainly interested in Australia might pass over the book thinking it is about Sri Lanka.

These small criticisms however should not detract from that fact that this book contains many new pieces of information put together in a compelling manner. It serves as testimony to the fact that many witnesses survived the ‘war without witnesses’ and that all they are looking for is the opportunity to share their stories and assistance in moving on. Some might see it as incumbent on the West to at least now begin to make reparations for the decisions of those times. It is certainly incumbent on all of us to at least listen to their stories – if they are willing to relive their horrors, can we be so inhuman as to turn away? And in this, Grant makes a strong contribution to giving all of us the opportunity to hear their stories.