Return and re-settlement of displaced persons in the North: A TNA overview:

Tamil National Alliance Research Series Vol. 1.2 2011
This report provides an overview of the return or resettlement of Internally Displaced Persons (IDPs) who were displaced during the final stages of the war in Sri Lanka. It is the second report in a special series of research papers published by the Tamil National Alliance (TNA). 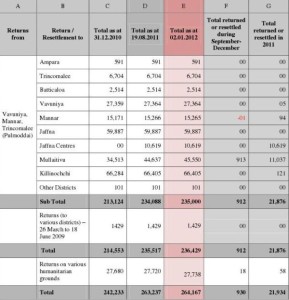 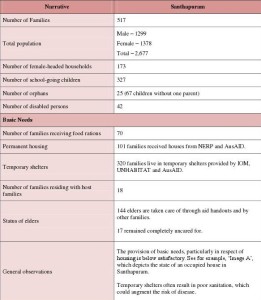 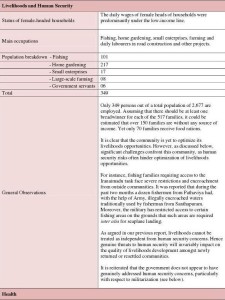 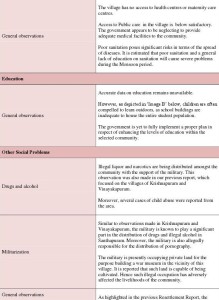 3. Special Issue: Kombavil
Kombavil is located in the Puthukkudiyiruppu (PTK) Divisional Secretary’s Division in the Mullaitivu District, approximately 1 KM from the Kaiveli Junction on Paranthan-PTK road. It is proposed as the location for a special settlement for displaced communities remaining in IDP camps. 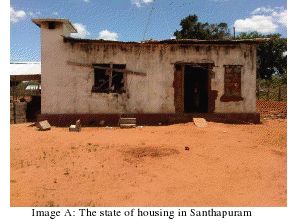 However, the proposed settlement is to be established in a dense jungle area known as ‘Timpili’ close to the Sri Lanka Army 68th Division Training School.
According to government sources, the government has undertaken this project as a temporary solution until the full completion of the ongoing demining process in seven Grama Niladhari (GN) Divisions of PTK and three GN Divisions in Maritimepattu. However, according to military sources, the Kombavil project is a permanent measure to resettle certain communities, as their places of origin would continue to be in military custody even after the demining process is completed.
According to verified figures, 7,394 IDPs belonging to 2097 families, who are currently accommodated at the Menik Farm ‘Relief Village’, will be resettled in the new Kombavil settlement. Each family will be provided with a 40 perch block of land and a semi-permanent house within the settlement. An area approximately 600 acres in extent has been initially cleared for this purpose. 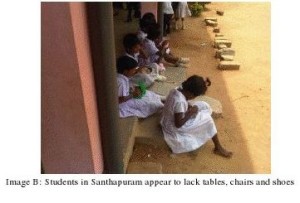 The proposed area is reported to be heavily mined. Hence the Sri Lanka Army has been deployed for the purpose of clearing the mines. It is reported that during the demining process, the entire area is ‘bulldozed’, thereby severely altering the soil layers. This altering could pose significant challenges to the resettled community in terms of future land cultivation.
On site observations reveal that Kombavil is an extremely remote area surrounded by thick jungle. It was observed that the proposed houses were very small and appeared to be extremely basic. Workers on site confirmed that all houses would be a standard size of 12 feet by 15 feet, irrespective of family needs. The government had decided to send a first batch of 100 families to Kombavil on 5th October 2011. However, by end-November 2011, only 73 families had been resettled. Workers on site observed that owing to the jungle and uneven ground, it would be difficult to complete even the basic semi-permanent shelters and toilets on schedule. On site observations further revealed that the ground water level is comparatively deeper than usual. Moreover, no infrastructure was in place to access the water.

Incidentally, not a single labourer from the PTK area has been employed for the project, despite incredibly high levels of unemployment amongst the PTK community and the IDPs in general. Only the military and some labourers from Trincomalee and other parts of Sri Lanka have been employed.
The communities that will be resettled in Kombavil come from coastal villages such as Mathalan, Valaigarmadam, Mullivaikal East, Mullivaikal West, Pokkanai, Vadivakal, Chalai, Ampalavan-pokkanavai, Aananthapuram, Manthuvil and Kepapulavu. The primary occupation of these communities is fishing. However, the Kombavil settlement is many kilometers away from the coast—some estimates indicate that it is approximately 8 KMs from the coast. Moreover, due to the depth of ground water levels, the option of farming appears to lack feasibility. The future sustainability of these new communities remains imperiled, as there are strong indications that the ‘Kombavil solution’ would be a permanent one. Despite the government’s claim that the arrangement would not be permanent, it is reported that at least nine permanent villages would be established in Kombavil.
The consistent claim of the government has been that the communities’ places of origin are unsafe owing to Unexploded Ordnance (UXO).
Military sources indicate that UXO pose a major threat to resettlement. However numerous counter-narratives on the issue raise doubts over the authenticity of this claim. For example, the military is reported to have initiated restaurants and tourism ventures in these areas and even constructed a war museum. Hence the claim that the sole barrier to resettlement in these places of origin is the presence of UXO appears to be false.
The new settlement in Kombavil lacks schools and places of worship, thereby stifling the education and spiritual wellbeing of the resettled communities. Children would be compelled to walk significant distances to reach schools in PTK, Vallipunam or Udayarkaddu. The only hospital in the vicinity is located in PTK.
Moreover, there are no proper roads to the Kombavil settlement, which could cause a significant burden to the vast community that is intended to be resettled there. It was observed that the entire area is easily flooded in the event of heavy rain. Thus the lack of proper access roads could also seriously undermine relief efforts in the event of flooding.
Many of the families already settled in the area expressed serious concerns in terms of basic needs, livelihood opportunities, education and healthcare facilities. Further, widows expressed concerns about security and the difficulties they would face in such an unknown area in terms of rebuilding their lives and establishing livelihoods without the support of men. The surrounding jungle and the proximity of the 68th Division Training Camp were perceived as a serious security threat to the residents.
4. Special Issue: High Security Zones
4.1 Outline of the issue
The principal issue is whether there is an acceptable process in place to ensure long-term sustainability of returns to areas demarcated as HSZs in the North of Sri Lanka.
The extent of land covered by HSZs was increased and expanded by the government during the war, causing the protracted displacement of thousands of civilians. Many of the HSZs have not been officially gazetted as such. Hence it is difficult to accurately estimate the extent of land comprising HSZs. In the District of Jaffna, for instance, estimations of land covered by HSZs vary between 18% and 30%. Consequently, the estimates of persons displaced as a result of these HSZs vary from 70,000 to 130,000. Following the cessation of hostilities in May 2009, the government announced its intention of ‘releasing’ areas demarcated as HSZs in the latter part of 2010.
Apart from the deprivation of property and loss of livelihood over protracted periods of time – commencing from as far back as 1987 – the imposition of HSZs has had far reaching effects. The gradual disintegration of infrastructure and private property are some of these effects. In certain instances, the extent of the disintegration has made it impossible to identify or demarcate the boundaries of individual lands and properties.
The present challenge is far greater than merely demining and releasing the land, and returning the displaced. The overarching consideration is whether returnees are able to permanently remain on the land to which they return, in a sustainable and durable manner.
The ability for individuals and families to permanently return to their places of origin within the HSZs would be a good indicator of whether returns to HSZs are sustainable (though it would not be conclusive of the conditions within these zones). For the purposes of this report (and for future monitoring of HSZs), the ‘number’ of those who have permanently returned will be used as a general indicator of ‘sustainability’. Future reports will, however, attempt to qualitatively assess the status of returnees to HSZs. It should be noted at the outset that a special committee to oversee HSZs in the District of Jaffna was appointed following the cessation of hostilities.
The core questions with regard to HSZs are as follows:
1. Immediate question: How many of those displaced from HSZs are able to (physically) return to their lands, which have been ‘released’ for resettlement?
2. Long-term question: Is there a plan and policy in place for the rehabilitation and reconstruction of HSZs?
The Valikamam North HSZ (located in the Tellipalai DS Division) was selected for the purpose of this study, particularly in terms of analyzing and progressively monitoring the ‘sustainability’ of returns to HSZs. The Valikamam North HSZ covers a land area of 58.6 KM2 and has a total population of approximately 83,000 persons. Valikamam North comprises 45 Grama Niladhari (GN) Divisions of which 35 GN divisions fall within the HSZ.
4.2 Recent developments
Breakdown of the 45 GN Divisions in Valikamam North 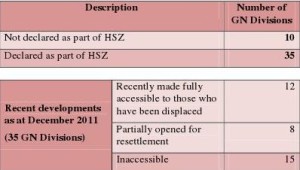 The ‘release’ of militarized zones and buffer zones commenced in March 2010, when three buffer zones surrounding the Valikamam North HSZ were officially released for the return of IDPs. Moreover, the first three GN divisions to be released, in November 2010, were from Valikamam North.
In January 2011, prior to the Presidential elections, the government promised the release of a further nine GN divisions,4 which were subsequently released after an official ceremony in May 2011.
According to the Tellipalai DS Secretariat, a total of 12,274 individuals and 3,511 families were to be resettled in their homes after 21 years. However, official numbers, released by the Tellipalai DS Division and Valikamam North Pradeshiya Sabha, for those who have been ‘settled’ in the GN divisions that have been made accessible, indicate lower figures i.e. 6,508 individuals and 2,096 families.
Overall, there is a wide disparity amongst official numbers for those who have ‘settled’, ‘registered’ and actually ‘returned’ (permanently) to the Valikamam North HSZ: