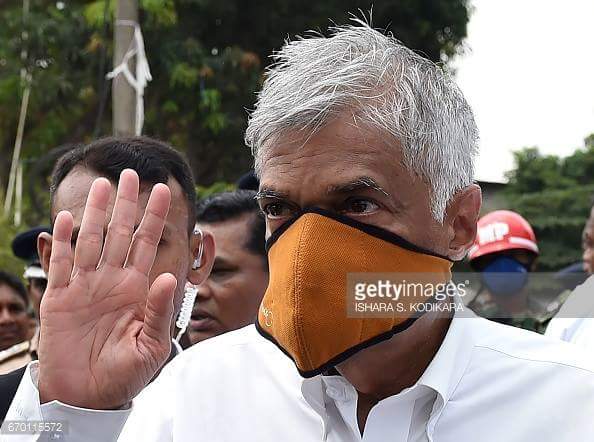 Image: one of the most surprising aspects of the election result was the performance of the UNP under Wickremesinghe.

The most interesting aspect of the defeat of Mahinda Rajapakse in January 2015 was the tendency of the Sri Lankan electorate to throw out of power a regime that was moving in an authoritarian direction. This was even more remarkable given that this was the leader who had given political leadership to consolidating the territory of the Sinhala nationalist through a military victory. After this military victory Rajapakse won the presidential election in 2010 with 57.9 per cent of the valid vote. But five years later he was defeated by Maithripala Sirisena, who received 51.3 per cent of the valid votes, as against Rajapakse’s 47.6 per cent.

What happened in 2015 was comparable to events in 1994, when the UNP was thrown out of power after seventeen years. For those who have forgotten this history, it is necessary to recall what happened during those years. This was a period that undermined democratic institutions, postponed a general election through a fraudulent referendum, and witnessed a massive crackdown of the JVP with the usual formula of extrajudicial killings and disappearances. The Tamil population was at the receiving end of organised violence and the beginning of a military approach to take care of Tamil militancy. Sitting on top of this mayhem was the beginning of a new period of capitalist transition, which emphasised markets, the private sector and openness to global capitalism. This was massively supported by assistance from developed capitalist countries and multilaterals. We still need to take a close look at the relationship between the violent turmoil in our country in the 1980s and the new economic agenda.

When the results of 2015 election were announced, the most interesting question for me was the behaviour of the Southern electorate where Sinhalese form the majority. The high turnout, with minorities voting against Rajapakse, were not difficult to explain. But what was interesting was that a significant section of Sinhala voters abandoned the Rajapakse camp. A comparison of the voting patterns in the 2010 and 2015 presidential elections shows that Mahinda Rajapakse lost a share of his vote in all electoral districts. Politically the interesting question is the shift in Sinhala-majority electoral districts. In five electoral districts (Polonaruwa, Ratnapura, Anuradhapura, Gampaha and Kalutara), between 2010 and 2015 the vote for Mahinda Rajapakse fell by more than 10 per cent. In nine others, it was 5-10 per cent. A very preliminary analysis of this phenomenon at polling division level shows interesting spatial patterns. There are contiguous areas in the North Central Province and Gampaha District, extending into Kurunegala District, where Rajapakse lost a significant proportion of his share of the votes. Therefore, contrary to ideas propagated by the Rajapakse camp, Maithripala Sirisena did not win only because of the minority vote. A section of the Sinhala electorate also shifted their allegiance.

Sustaining the support of this Sinhala electorate was crucial for any reform envisaged by the regime that came into power in 2015. It would be important to sustain economic reform, as well as to find answers to the Tamil question. This is something often forgotten by what is now called civil society, which has taken a neoliberal bent. For them, it has become more important to look towards what is called the international community than to think about how to sustain a social base for their work within the majority community.

Although the regime that came to power after the 2015 general election was hailed by some as some sort of a new beginning, with the two major parties that had ruled the country coming together, what dominated was the usual intra-party rivalry of the Sinhala political class that is familiar to those who have studied Sri Lankan politics in the past. The UNP agenda was to ensure that the management of key areas like defence and economic reform was in their hands. The latter was the most important objective of the last three years of UNP politics. A president weakened through the 19th amendment has helped the UNP in this task. This strategy backfired, and the antagonism between the president and the UNP, led by the prime minister, became an integral part of party political battles in the local government elections. It needs to be noted that when the election was held the traditional anti-UNP electoral base was divided into three factions – the Joint Opposition, SLFP and UPFA. In this context, one of the most surprising aspects of the election result was the performance of the UNP.

The following table gives the performance of the UNP as a percentage of valid votes in the general elections held under proportional representation. Although the latest local government results are not strictly comparable to general election results, the drop in UNP popularity is noticeable. The drop in the valid vote, from 45.7 per cent in 2015 August to 32.6 per cent in February 2018, is quite remarkable. The flip side of this was the newly-formed SLPP becoming the second major party, marginalising other political formations. If the UNP’s normal strategy of dividing the anti-UNP vote had worked better, the SLPP would not have become such a powerful political force.

* There are discrepancies in the number reported in the media. This number is taken from the website http://www.manthri.lk/en/blog/posts/lg-elections-2018-setting-the-record-straight

The ideas that dominated the three years of the so-called unity government consisted of: a) continuing with the agenda of economic reform that gives emphasis to markets, the private sector and free trade. The search for free trade agreements, especially with emerging capitalist powers in the region, became a key element of economic policy. From the coalition partners this was primarily an agenda of the UNP. In fact, the UN brought back the ideas that formed the basis of ‘Regaining Sri Lanka’, which they had introduced during the failed negotiations with the LTTE, identified as a ‘peace process’ by the liberal peace lobby, to the centre of economic policymaking; b) another attempt at constitutional reform in alliance with the TNA; c)trying to address questions of accountability associated with the last stages of the war; d) promoting activities under the notion of reconciliation; e) governance reforms, which amount to passing certain laws and setting up some new institutions.

To sum up, the basic vision was to vigorously pursue an agenda of deepening capitalist transition, stabilise society through a notion of reconciliation, respond to the demands of structures of global governance dominated by a neoliberal political project, and some attempts at developing a rule-governed state. However not all these elements were promoted with the same degree of intensity. The dominant strand was pursuing the economic agenda.

While the regime was pursuing this agenda, within the Southern part of the country there were a range of protests, strikes and various other forms of resistance. Here, I don’t mean only the much-publicised agitation against the private medical college, but a much wider range of protests that took various forms. Some of the issues were long-standing grievances, and others a fall-out from the policies of the new government. A wide range of social groups, such as traders, farmers, state sector employees, the unemployed, and professional groups worried about the impact of free trade agreements, were involved in these protests. Unfortunately, it is difficult to go deeper into these protests because there has not been any systematic analysis of them. This will be an interesting exercise to undertake. But it is very clear that they cannot be explained purely on the basis of identity politics. Often the protests have nationalist slogans, but the underlying reasons are much more complex Certainly socio-economic issues in an economy increasingly dominated by markets and a fall out of a policy that believed in free trade had a role to play.

My own understanding of the poor performance of the UNP is that it did not give an impression of being a party that is sensitive to these socio-economic issues. Trapped in its own neoliberal orthodoxy, which now has become almost a belief system, it did not have the capacity, nor did it show that it is concerned with these issues in the Southern part of the country. Sometimes it was led down by the inefficiency of the government machinery. But the bigger question is its own vision of how economic reform takes place in a particular society with its own history. UNP also suffers from a lack of strategy to politically manage these reforms. If we look at the history of capitalist development around the world, there is no one path. There are varying strategies, based on the nature of society and balance of political forces. With such a dogmatic approach to economic reform, it is no surprise that the UNP lost a significant section of the Southern voter base.

The way the electorate in the Northern Province voted is the other important result of the 2018 local government election. This clearly shows that the dominant position that the TNA has had in Tamil politics is over.

As a result, Tamil nationalist politics is bound to have multiple champions, with the Tamil diaspora also playing an important role. With this political configuration, it will be more difficult to find a political answer to the Tamil question. Given its political position after the election, the TNA is likely to take a more a hard-line position, both in relation to constitutional reform and issues of accountability. The question is whether a regime weakened and divided by the local government election will be able to respond.

These outcomes, together with continuous anti-Muslim violence and problems faced by some of the other minorities, demand a fresh look at the challenges that Sri Lanka is facing due to the multi-ethnic character of our society. This has been a subject of Sri Lankan scholarship for some time, and much more intensively during the past forty years. Among the issues, scholars have focused on historical background, especially the impact of the period of British colonialism, the structure and identity of the state, public policies, including how promotion of markets affect ethnic relations, identity formation in society, and the organised manifestation of identity politics in society. Despite this wealth of scholarship in the country, the bulk of the policy discussion at present is dominated by a notion of ‘reconciliation’.

The primary reason for this is the dominance of the framework used by the international organisations that began to influence the debate from the early 1990s. The approach of these organisations was to look at Sri Lanka through notions of conflict and conflict resolution. In this framework Sri Lanka was primarily a case of a conflict between two ethnic groups. Within this simplistic idea, complex issues surrounding Sri Lanka’s ethnic relations, and relations between the ethnic groups and the state, get forgotten. It also ignores that fact how aid has contributed to sustaining a state engaged in an expensive armed conflict during the past forty years mainly because it shifted the direction of economic policies in 1977. The conflict approach was also in line with the strategic interests of many of the countries providing assistance for this type of work. The main concern was the instability that such conflicts create. This discourse has continued after the end of the war. Once the war was over through a military strategy, the next step was to stabilise society through reconciliation between ethnic groups. This discourse has now become dominant due to the availability of funds, leading to marginalisation of all other issues. The results of this election, and what is happening in the country, should open our eyes to the limits of this discourse.