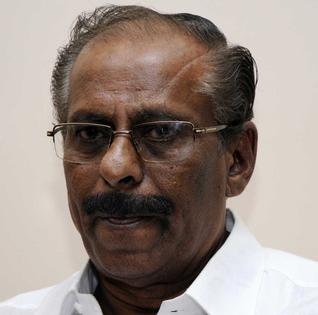 Kavita Kishore
A Sri Lankan parliamentarian from Jaffna who played a key role in the campaign that led to the victory of the Tamil National Alliance in the recent Northern Provincial Council election says the first priority for the new government should be to ensure that lands destroyed in the war be reclaimed and livelihood programmes for the people introduced.
The international community has to put pressure on the Sri Lankan Government to rebuild the devastated areas, TNA MP Mavai S. Senathiraja said here on Sunday. He was on a personal visit to Puducherry.
The second priority, he said in an interview to The Hindu , should be to pass laws to bring in money for the development of provincial councils. The local bodies, at present, were unable to access necessary funds for development, he said.
The third thing, Mr. Senathiraja said, should be to give the people the right to self-rule, for which India’s support was necessary.
Beyond 13th amendment
The main issue for Tamil people was the question of self-governance. The people were looking to go beyond the scope of the 13{+t}{+h}amendment of the Constitution, which called for devolution of powers, and find a solution that was amicable to both parties.
On the issue of the arrest of Tamil Nadu fishermen by the Sri Lankan Navy, he said the two governments should work together to come up with an amicable solution.
Fishermen issue
Currently, Sri Lankan Tamil fishermen did not possess trawlers and boats that allowed multi-day fishing. As a result, when Indian fishermen entered their waters and took away large hauls, it reduced the Sri Lankan fishermen’s potential to fish in their own waters, he said.
Mr. Senathiraja said Muslims, after Tamils, were now being targeted in southern Sri Lanka by chauvinistic elements.
There have been cases of mosques and other religious places being set on fire and the Muslims now do not have freedom to observe their religion. Soon, the Tamil people and the Muslims will get together to fight the government, he said.
He urged the Tamil Nadu Government to pass a resolution in the Assembly urging the Central Government to alleviate the sufferings of the Tamil people.
Over three lakh Tamils were yet to be resettled and there were 68,000 in refugee camps in Tamil Nadu.
These people need to be resettled in their homeland. The army and the government, instead of resettling these people, were building hotels and Buddhist temples in land owned by Tamil individuals.
There was currently a case in the Supreme Court, where 3,000 Tamil former landowners were asking that their lands be returned to them.
– The Hindu
Share
Facebook
Twitter
WhatsApp
Pinterest
Email