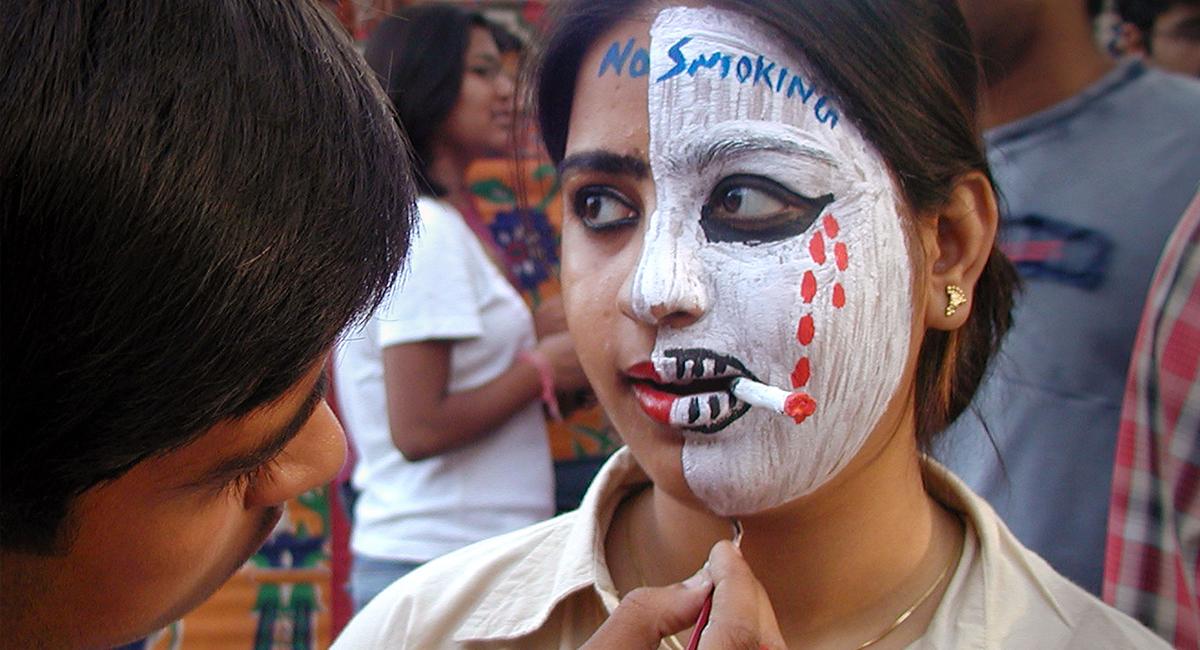 Delivering his Keynote Address at the Seventh Session of the Conference of Parties to the WHO Framework Convention on Tobacco Control (FCTC) held in Noida, India on 7th November President Sirisena called on world Community to resist the attempts by tobacco industry to undermine tobacco control by governments. .

The full text of the keynote address of the  President Maithripala Sirisena follows:

Officials of the FCTC and other Organizations,

First of all, let me thank you, Dr. Salagay, and Dr. Vera da Costa Silva for the very kind invitation to be the Guest Speaker at this important conference. I consider it as a great honour and privilege extended to me and to my country.

Dr. Vera, we deeply appreciate the enormous work that you and your officials have undertaken during the past few months to ensure the success of this meeting. Let me also warmly congratulate you on the FCTC completing ten productive years and wish your outstanding work all success in the future.

I am delighted to see my good friend Shri Narendra Modi with us here today, and I believe his presence speaks for his commitment to the subject of this conference. We must appreciate the generosity of the Government of India to host this session of the COP.

I am also happy to see the Deputy Director-General of the WHO, Dr. Asamoah Baa and our dear friend, Dr. Poonam Singh, the Regional Director of the WHO.

As we open this 7th session today, the Parties of the Convention have grown to over 180 during the past 10 years, representing over 90% of the population of the world. This shows the power and influence of the FCTC and the level of impact you can have on the health of the human kind. Sri Lanka has benefited immensely from the information and evidence that you have generated over these years in framing our policies and regulations for tobacco control.

I observed that the last session in Moscow was extremely important and helpful. The decisions made there helped us to advance the international policies to prevent tobacco use in very important ways. The agenda for your discussions at this COP is also extremely relevant and important to all of us. Of special interest are subjects like control of new products such as E-cigarettes and water pipes, economically viable alternatives to tobacco growing, and gender-related risks in tobacco control.

We, in Sri Lanka, have accepted many of the recommendations of the FCTC from the time we ratified it in 2005. Sri Lanka was one of the first countries in the South-East Asia region to sign the FCTC and to later ratify it. Then, in line with the FCTC we passed our own Tobacco and Alcohol Act in 2006 and set up the Tobacco and Alcohol Authority, popularly known as the NATA. I believe our NATA is rather unique in the Region and elsewhere because it is perhaps the only such organization that covers both tobacco and alcohol. There are some historical and technical reasons for this.

Since I assumed the Office of President in early 2015, tobacco and alcohol control has been at the top of my national agenda. I have set up a Presidential Task Force to monitor the situation with regard to drugs and narcotics. In fact, I hold a monthly review meeting where all relevant sectors meet to assess the progress and make multi-sectoral policies and plans.

In line with the recommendations of the FCTC, we have also reviewed the tobacco taxation policies, and just a month ago, we have been able to increase tobacco taxes by nearly 10% again.

My Minister of Health, Dr. Rajitha, is proposing to introduce plain packaging as another important measure in the near future; and here, we thank the FCTC for the excellent technical support. We are drawing freely from the lessons and experiences of some of the countries that have already introduced plain packaging.

We are also addressing the tobacco issue in numerous other ways, by having adopted very strict air pollution laws, banning smoking in public and closed spaces. Advertising of tobacco is totally prohibited, although, like in most countries, the tobacco industry adopts very shrewd tactics to promote tobacco to vulnerable groups, especially to the school children. In all our work, we have found the informed and willing guidance from the FCTC and the WHO extremely helpful.

With support from the WHO and the FCTC, we regularly monitor the trends of tobacco prevalence among the population. Sri Lanka completed the Global Youth Tobacco Survey earlier this year and we were pleased to learn that the prevalence of tobacco use and smoking among the youth has shown a significant downward trend since the last survey. The WHO STEPS survey that was just concluded showed us that the prevalence of smoking among the adults also has slowed down. Encouraging as these results are, we are not fully satisfied because we believe that far too many people in Sri Lanka still do smoke. We hope that together with you, Sri Lanka will be able to emerge as one of the emerging economies that successfully eliminates tobacco as a public health problem.

I recall Dr. Margaret Chan addressing the COP 6, and emphasizing the need to resist the attempts of the tobacco industry to undermine tobacco control through litigation and interference in government policy-making. I experienced this first-hand when I was the Minister of Health until the end of 2014 and tried to bring legislation to include pictorial health warnings covering 75% on cigarette packets, in line with the FCTC guidelines to control the harm from tobacco, particularly among children. I spent many days and hours in court houses as the tobacco industry filed a series of cases challenging this move. After a long delay, the court finally reduced the percentage cover down to a maximum of 60%. That was all we could get at that time. Once I became the President, however, I could intervene again. I requested my Minister of Health to bring a new bill to the parliament to increase the pictorial warnings to cover 80% of the surface. Finally, we could achieve it.

As we know from long experience, the tobacco industry often distorts and challenges the best scientific knowledge, promotes dishonest arguments that have nothing to do with the truth. We know that the industry will try to influence policymakers in many ways, often support petitioners to challenge government legislation and persuade the mass media. This, to me, is a direct interference in the internal policy matters of any country. We need not have any compromise of any kind with the tobacco industry.

Another issue that we have to guard against is the illicit trade of tobacco products. This is doubly so, when we strengthen our tobacco control legislation and policies, especially our taxation policies. It can pose a major threat to public health and undermine our national tobacco control policies. It helps to avoid measures, like increases in taxes which we know will reduce demand. All these mean that we will not be able to effectively implement and take full advantage of the provisions in the treaty. Therefore, it is essential that more of the Parties do ratify this protocol quickly, so that it can become law.

I need to bring to your attention the growing serious problem of smokeless tobacco in Sri Lanka and in the Region. While a form of betel-chewing is a deep-seated lifestyle, commercial preparations are also becoming popular mostly among the younger generation in Sri Lanka, specially, among urban and semi-urban communities. A large body of scientific evidence shows the strong link between smokeless tobacco use and several serious health outcomes, mainly, mouth cancer. I would urge the FCTC to address the issue of smokeless tobacco also very seriously in the years to come. Cost of neglect can be very high.

Finally, I wish to place the tobacco menace in the broader perspective. Sri Lankan population is already at an advanced stage of ageing and disease transition. NCDs are now the largest contributor to disease burden in Sri Lanka, accounting for most of ill-health, disability, and early death. This makes risk factors such as obesity, smoking, alcoholism and high sugar and salt diets the major health issues to be addressed in Sri Lanka. My government is leading nationwide efforts to address the problem of non-communicable diseases. The central theme of our NCD programme is health promotion and prevention.

Sri Lanka is also very concerned with the wider issues related to health. Therefore, we take the Sustainable Development Goals very seriously. In addition to health-related policies, regulatory frameworks in other domains such as education, trade, food, agriculture and environment also have a major bearing on NCD risk factors. Therefore, we have to put in place suitable integrated policy and regulatory measures to reduce the level of exposure to the common modifiable risk factors for NCDs.

While looking at improving the health and well-being of our people, we are also keeping in mind our wider obligations in the SDG agenda. In this regard, two weeks ago, we organized an international round table on the role of sustainable consumption and production in climate change mitigation. This is a part of the ‘Sri Lanka Next – Blue Green Era’ to advance progress on SDG 12 in Asia. Sri Lankan Renewable Energy project has contributed to reduction of almost 3,000 tonnes of greenhouse gas emissions annually since 2014, through the dissemination of biogas systems. My government has a target to increase the share of renewable energy up to 20% of the demand by 2020. We will continue to play our role on the global stage and meet our global obligations without any reservations.

Finally, Mr. President, distinguished delegates, I believe that our shared ambition should be to ensure the full implementation of the FCTC, to see its powers tapped fully to eliminate the harm from tobacco, and passive exposure to tobacco smoke, everywhere in the world.

In all of this work the world looks forward to the leadership and guidance of the FCTC, the WHO and the related global institutions.

I thank you very much and wish this session all success.