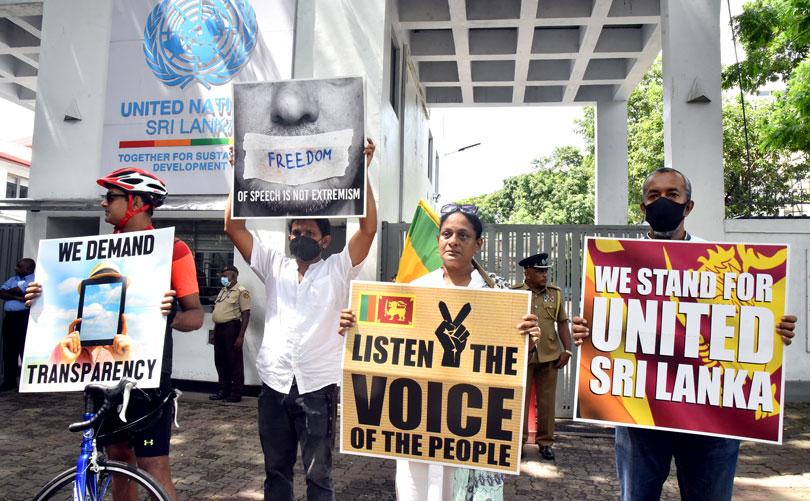 Direction Sri Lanka, consisting of Sri Lankan professionals, has declared that the resignation of President Gotabaya Rajapaksa and Prime Minister Ranil Wickremesinghe is a prerequisite for the resolution of the current political-economic-social crisis

The grouping has made the following proposals:

a) The President should resign forthwith in response to the demands of the People;

b) A successor President should be elected;

c) The Prime Minister should resign forthwith after the election of the successor President;

d) A Caretaker/Interim National Government should be immediately formed comprising a new Prime Minister and a Cabinet, limited to 18 essential portfolios along with an equal number of Deputy Ministers, representing all political parties;

– The Caretaker / Interim National Government to function for a maximum period of one year;

– The persons holding portfolios in the Caretaker / Interim Cabinet to have adequate and appropriate educational qualifications and specialised skills required to hold the respective portfolios and to be persons of the highest integrity;

– Members of Parliament on the National List to be encouraged to resign as necessary to pave the way for professionals / experts of the highest integrity to be represented in the Caretaker / Interim National Government;

f) Immediately upon the reintroduction of the 19th Amendment, steps to be taken to appoint persons with the highest integrity and ability to the Independent Commissions.

Direction Sri Lanka, in addition, called for the holding of early elections subsequent to the envisaged Constitutional amendment reverting to a Parliamentary democracy with independent institutions and processes to ensure the Rule of Law and good governance and to avoid the arbitrary exercise of powers of governance and the excessive reposing of powers in any single individual.

Direction Sri Lanka also notes that pursuant to the increasing protests and escalating crisis culminating with the attack on peaceful protestors on 9th May 2022 by Government agents and the irresponsible inaction of law enforcement authorities leading to island-wide anarchy no less a person than the President of Sri Lanka made a pledge to the people of Sri Lanka that the long criticised 20th Amendment of the Constitution would be repealed and the 19th Amendment with positive features will be restored.

Direction Sri Lanka also notes that such a pledge came from an Executive President having almost untrammelled powers under the existing 20th Amendment to the Constitution.Yet, events that unfolded since and the actions on the part of the President and those in governance have run contrary to this undertaking and have further eroded democracy and good governance, taking Sri Lanka to the edge and resulting in further erosion of any trust or confidence being placed on those in governance locally and internationally.

Beginning with the cobbling together of ‘a Cabinet’ comprising a Prime Minister and many members of proven failure and some with criminal convictions and credible allegations of corruption, it is now, after what seems deliberate filibustering, an attempt being made to cheat and deceive the people by a purported amendment to the Constitution.

The Twenty Second Amendment Bill published in the Gazette neither reflects the pledges made nor addresses the genuine concerns of the people but is aimed at entrenching and continuing in power by a President and a government that has deplorably failed the nation.The proposed amendment fails to address or in any manner accommodate the following proposals of Direction Sri Lanka, which have been communicated to the Minister of Justice and Constitutional Affairs and the public, which include:

The original 19th Amendment Bill sought to provide greater representation by appointees from outside Parliament. The present draft provides only for three (3) such persons in a total of seven (10).

The original 19th Amendment Bill proposed a 3:7 ratio between Members of Parliament and appointees from outside Parliament but this was reversed to 7:3 due to the insistence of the then Opposition. The present Bill seeks to continue with the same 7:3 ratio.

2. Persons / institutions coming under the purview of the Constitutional Council

The following institutions also to be brought under the purview of the Constitutional Council so that their members would be appointed on the recommendation of the Council:

a) The Right to Information Commission.

b) The Colombo Port City Commission.

d) The Members of the Monetary Board of the Central Bank of Sri Lanka, other than the chairperson and the Secretary to the Ministry of the Minister in charge of the subject of Finance.

3. Article 44 of the Constitution – Minister and their subjects and Secretaries

The President should not hold any portfolio, and hence Article 44(2) of the Constitution to be deleted.

Prime Minister and Secretaries of Ministries. These appointments should be on the advice of the Prime Minister for purposes of practicality.

Direction Sri Lanka also proposed that in view of the new structure of governance to be introduced, the appointment and removal of Ministers must necessarily be on the advice of the Prime Minister. Even though provisions to this effect have been included, most unfortunately they come into effect only for the next Parliament which simply does not stand to reason in the present context.

4. Non-applicability of important constitutional provisions to the current Parliament

However, most significantly, in terms of the proposed 22nd Amendment, these changes would not apply to the current Parliament.

It is clear that a pre-condition to international assistance to overcome the present crisis would be a consensus government. However, if the President would retain such powers, other political parties and Members of Parliament who have declared themselves to be independent of the governing party would not be interested in joining the Government.

5. Other matters to be considered

We also submit that in appointing Governors and Heads of Missions Abroad, the President shall act on the advice of the Prime Minister.

In summation, the overall effect of the 22nd Amendment Bill is to perpetuate the continuance of a President and Government that has lost the mandate of the people. The Bill, in many aspects, reflects the 20th Amendment to the Constitution, which has been rejected by the President himself.

The inevitable conclusion is that the present government that has led the country to the present debacle is determined to cling to power purely in its own interests and contrary to the wishes of the people or the good of the nation.

Direction Sri Lanka also notes various ad hoc measures resorted to under the guise of alleviating the immediate economic problems which further confirms incompetence with potentially dangerous and lasting effects for Sri Lanka, such as non-transparent dealing with its assets and reckless undertakings.

Direction Sri Lanka is now of the considered view that unless all aspects of its original proposals set out at (a) to (f) above are implemented, those in governance, including the President, will have visited irreparable and irreversible damage to our country leading to anarchy. Direction Sri Lanka, therefore, demands that even at this late stage, proper course correction by resorting to the above is embarked upon as a matter of urgency.