Report: Repression of Dissent in Sri Lanka, May 2020 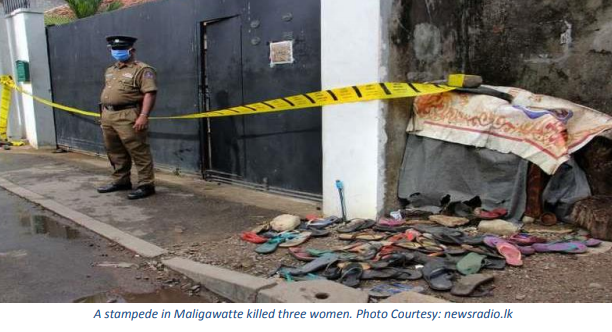 (INFORM) There were 72 incidents reported during this month of May, reporting more than two incidents per a day. This was a significant increase when compared with the previous months. Another significant difference was 32% of incidents reported from North and East. 14 incidents (19% of total incidents) were reported only from the Jaffna district. In the cases, where information on ethnicity was applicable and available, over 60% of the victims were Tamils. Similarly when gender was considered, 87% were males. Highest number of victims by profession was state officials. Secondly it was politicians and their party members. When the alleged party was considered, the military and police were responsible for the highest number of incidents (37%). Second highest number of perpetrators was politicians (18%).

Over 20,000 were arrested for curfew related offenses during this month, increasing total number of arrests over 66,000 since 20th March. This led to the overcrowded prisons. Also economic problems increased due to almost two months long curfew which restricted work and economic activities in the COVID19 situation.

On 21st May, 3 women died and 9 others injured due to stampede in Maligawatte, when a wealthy businessman distributed money to the poor people in the area. On 5th May, the President’s Secretary P.B. Jayasundara requested state employees to donate the entire or a portion of their salary for the month of May, in a bid to reduce the budget deficit. Though this was voluntary request, at least in several cases salary was curtailed without the consent of the employees, and a trade union filed a court case against salary curtailment. The opposition politicians were questioned and investigations were launched against them over alleged false statements they have made in relation COVID19 situation. However, it seemed that progovernment parties enjoyed immunity despite of them having made such false statements and hate speech comments against minorities. The President started having monthly meetings with the Buddhist monks.

On 22nd May, during the meeting of the “Buddhist Advisory Council” held at the Presidential Secretariat, he promised that a Presidential Task Force will be appointed under the Defense Ministry to conduct a comprehensive survey of archaeological sites in the East and to take measures to preserve them. This was criticized by land rights activists for allegedly attempting acquisition of lands of people without adhering to transparent procedures, or providing scientific justification of archaeological claims. Also, several incidents of assaults on civilians by military and Police were reported in North and Eastern Provinces and in the Kalutara district.

In the North people commemorated Mullivaikkal day grieving about their lost loved ones during the last phase of war, while GoSL celebrated war victory at “National War Heroes Day”. The president threatened to leave global bodies if they demand for accountability on alleged war crimes. 177 military officers including Priyanka Fernando convicted by a UK court for threatening Tamil protesters were promoted on this day.

President issued a gazette calling for armed forces same as the previous months.

In the North and Eastern Provinces, a number of memorial events faced severe restriction claiming COVID19 situation. Jaffna magistrate issued an order against 11 TNPF leaders of TNPF forcing them to self-quarantine the day before the Mullivaikkal Remembrance Day. However, after hearing a successful appeal, the Jaffna magistrate lifted the quarantine order against them. On 18th May, police halted another Mullivaikkal remembrance event organized by ITAK at their office in Batticaloa presenting a court order. In many cases participants of Mullivaikkal remembrance events were threatened of arrest, and their details were noted down by the Police. Many of these were small gatherings which followed COVID19 health precautions.

Contrarily, in Colombo and in NuwaraEliya districts, the funeral of a late cabinet minister was carried out violating the COVID19 health regulations and gathering masses of people along with the patronage of the government. Two persons in Puttalam were arrested for lighting lamps remembering the dead during the war. This was the only such case outside the North and East.

A former MP of the ruling party called a fact check NGO of being “a secret American conspirator.” Several claims were made by pro-government newspapers and ruling party politicians that investigations have been launched into two petitions allegedly signed by civil society and sent to UN.

Police and NGO secretariat stated that they have launched investigations into NGOs that have been registered during the last regime, without following the due process. On 31st May, a former MP of NFF criticized a workshop conducted for election officers by NGOs, and demanded an investigation to find out details of which NGOs are involved, details of participants etc.

Private sector Media were not allowed to cover the “National war heroes’ day” event, citing COVID19 regulations. However they were allowed to cover larger gatherings such as the funeral of late minister. One journalist was threatened by villagers for photographing a mosque without informing the community members. On 29th May, Police attempted to seize a laptop used by an exiled journalist. Another journalist was threatened by a politician after reporting irregularities in the distribution of government allowance for vulnerable persons in COVID19 situation. Two were arrested for publishing a video claiming that group of people staying at a temple unable to return their homes due to lockdown do not have access to basic facilities. An inquiry was held against a former minister for allegedly insulting Buddhism. A confidential secretary of a government company was arrested and granted bail for allegedly leaking a letter warning of a terrorist attack – which defense ministry stated that had no truth. A Tamil politician faced online and offline hate speech after allegedly criticizing LTTE. Another person faced hate speech for criticizing covid19 quarantine process. Government called for the censorship of term Eelam published in a travel quiz of a UK newspaper. The same term was temporarily censored in instagram platform. Contrarily, the term Eelam includes in the name of a pro-government Tamil political party and it is published in government websites.

A lawyer appearing on behalf of the victims, in the 11 youth abduction case against military was threatened online and lodged a complaint in the CID. The house of the lawyer who appeared in defence of the TNPF leaders who were forced to send to quarantine process ahead a Mullivaikkal memorial event was attacked.

Police launched investigations into a protest conducted by the opposition UNP politicians. An article written by political editor of Sunday Times titled the photo of former UN high commissioner Nanvaneethan Pillai as “Sheep in Tiger Clothing- in a Saree reflecting colours of LTTE flag.” Mrs. Pillai has been critical of abuses of LTTE in the past.

Election commissioner Hoole was subjected to severe criticism and hate speech and called “a conspirator”, “a supporter of separatist forces”, “an utter fool or a suicide bomber” by pro-government politicians and nationalist newspapers. An investigative article published by a website claimed that a senior police officer was transferred after refusing to fabricate charges against a former Police officer who handled key investigations. A statement issued by PHI association claimed that an organizer of the
funeral of late cabinet minister has threatened the Director General of Health services. A divisional secretary stated that he will withdraw from certain duties due to undue influences from a politician.

There were few incidents that health workers were assaulted when they carried out their duties. There were also several incidents that forest officers, and Police officers facing threats and assaults when they tried to arrest suspects. A state official was assaulted by an unknown group when he was preparing the list of beneficiaries for 5000 LKR allowance.*

A father of a 14 year autistic child subjected to Police assault was threatened not to take legal actions. A family of COVID-19 suspected death was allegedly threatened by authorities not make the information public.

Read the full report as a pdf:INFORM suppression of Dissent 2020 May_Eng