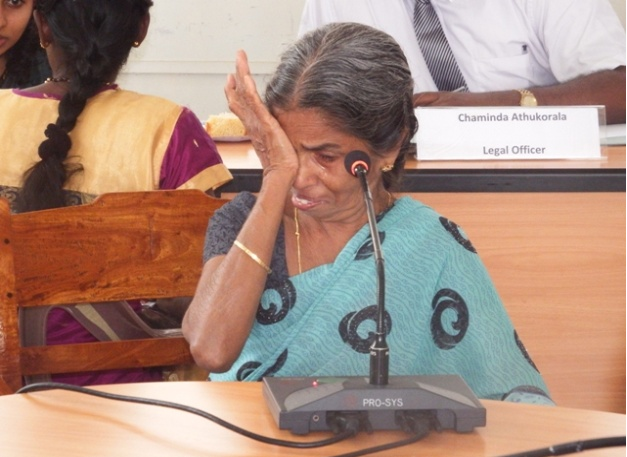 Tamil print media extensively captured the two notable complainants who provided testimonies during the hearings held in the Jaffna district; while the first day’s hearing began with the testimony from the wife of Mahendrarajah alias ‘Rehan’, Head of the Medical wing of the LTTE, wife of Mr. Yogaratnam Yogi appeared in front of the Commission on the 16th February 2014. 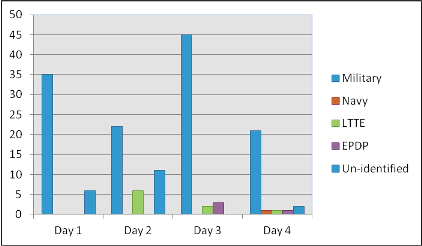 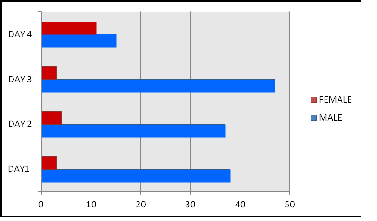 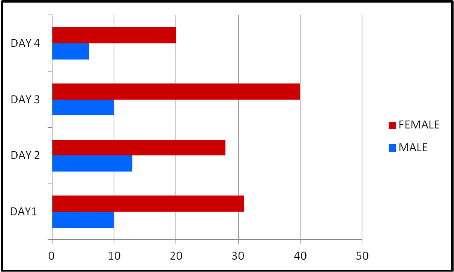 9)       Cases regarded as ‘out of the mandate’:
It was also observed that few family members of the victims who were abducted in Colombo too appeared front of the Commission to provide testimony. However, the Commission did not undertake their testimonies quoting such cases are out of the Commission’s mandate. Explanation was given that this particular Commission is mandated to attend to the cases of the residents in the North and East provinces and have been abducted / disappeared within the time frame of 10 June 1990 to 19 May 2009.
10)   Participation of the LAC and Civil Society
Legal officers representing Legal Aid Commission were present during all four days of the hearing at the official invitation of the Commission. The Legal officers mainly performed the role of interpreters for both the State Counsels. However, during the follow-up inquires undertaken by the State Counsel officials, where ever needed, the Legal officers of the LAC were given freedom to raise additional questions as well. On the last day of the hearings, LAC played a role to raise more specific questions to the complainants separately aiming to undertake follow-up actions and also tried to stall the rushed process as much as possible.
11)   Presence of the representatives of the intelligence unit:
Immediately after the commencement of the hearing on the first day, presence of the officers from the intelligence unit was noticed within the premises. The presence of two Military officers has been noticed on the second day hearing which was held in Chavakachcheri along with the officers from the intelligence unit. It is also pertinent to mention about the presence of Sri Lanka Telecom; as per the commission, it was indicated that the task of the SLT was to record all the testimonies which will be transcribed later enabling the relevant officials to conduct investigations: however, the behavior of an individual who introduced himself as a staff of SLT remained suspicious.
12)   Additional information:
·         As per the information officer of the Commission, the commission is in the process of launching an official website and in addition he stated that the details of the next public hearing are not yet finalized.
·         At the end of the first day’s hearing, during the media briefing, the respond given by the Chairman in regard to the protection of complainants remains unsatisfied; the Chairman has basically stated that all families are welcome to inform the Commission of any follow-up threats faced by the families.
·         On the last day of the hearing, upon the completion of the 17th case hearing, the Chairman excused himself from the rest of the hearing quoting that he was unwell and need some rest.
·        Report by a group of civil society actors from North:
On the 18thFebruary 2014, approximately 300 families of the victims of the disappeared residing in Kilinochchi have assembled at the District Secretariat, Kilinochchi. As per the feedback provided by few women, on the 17thFebruary 2014, residences of these family members were visited either by a Grama Niladari official or military personnel or officials who were in civil dress requesting them to attend a meeting at the District Secretariat on the next day. Families which have been given such instruction includes those who have already provided testimonies to the Commission in Kilinochchi last month and those who have not yet appeared front of the Commission yet. Based on the telephone conversation with one of the women, it was said that, upon the arrival at the DS office, as these families were not attended by any officials, after a long wait, many have returned home though approximately 70 individuals have continued to stay back who then have been taken to the Harmony centre in Kilinochchi. Woman continued to state that, at the Harmony centre, military officials have requested in a very subtle manner to apply for death certificates.  However, as per the available information, so far none of the family members have moved forward on this regard. The civil society group is currently following up with some of these families to obtain further information.
While finalizing this report, it was also informed that yesterday evening (18th February 2014), the military officials based in Chavakachcheri DS division has requested the details of those who have provided testimonies to the Commission from few of the Grama Niladari officials. No further information is available currently, though this matter is currently being followed up by some civil society actors.

– Right to Life Human Rights Center/ Families Of the Disappeared