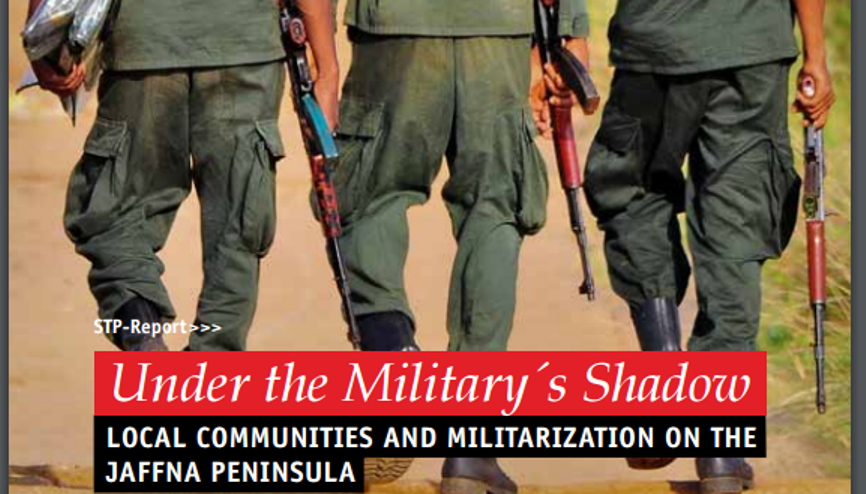 The Society for Threatened Peoples Switzerland (STP) published today together with their Sri Lankan partners National Fisheries Solidarity Movement (NAFSO) their report “Under the Military´s Shadow – Local Communities and Militarization on the Jaffna Peninsula”. The report indicates that the military on the Jaffna Peninsula in the North of Sri Lanka is systematically violating the human rights even seven years after the end of the war. The military grabbed land unlawfully and denied the access to sea and land for local farmers and fishers. Several Thousands still live in “Internally Displaced People” (IDP) camps where the standard of living is not adequate for families. The STP recommends that the “Government of Sri Lanka” (GoSL) returns the occupied land to their traditional owners.

STP and NAFSO reviewed the impact of the militarization on the local population on the Jaffna Peninsula. The region remains highly-militarized. The military presence has not reduced since the end of the war. The military surveils, intimidates and harasses the local population, activists and NGO staff. Over 25 years ago, the military occupied large areas of land. Consequently, the former inhabitants lost their access to land and sea. The Ocean Grabbing of the military has destroyed the livelihood of the former inhabitants. Furthermore, the commercial activities of the military, like tourism and agriculture, deprive local communities of an important income source.

Situation in IDP Camps and the resettlement process
Even though the war ended seven years ago, tens of thousands of people are still internally displaced on the Jaffna Peninsula. Several thousand of them continue to live in IDP Camps, where the precarious living conditions are not adequate for families, particularly women-headed families. Currently the GoSL is releasing some areas of occupied land. Some parts will, however, remain occupied. The government is resettling IDPs on the released land. Some of the IDPs were resettled on their traditional land where fishing and farming is possible. The other resettlement areas, where people were resettled without their consent, are mostly unsuitable for agriculture and fishing. Therefore, they cannot develop their traditional livelihood.

Demilitarize the Jaffna Peninsula
The STP and NAFSO urge the GoSL to reduce the military presence, to cease the surveillance of local population and order the military to end all of their commercial activities. Furthermore, the government is urged to release all occupied areas to their traditional owners and consult the IDPs on the resettlement process. The STP and NAFSO also recommend that the government support resettling IDPs to develop their traditional livelihood and provide them with sufficient basic facilities such as drinking water, electricity and sanitary facilities and ensure access to schools and health facilities. For women-headed households in particular, an adequate standard of living free from hunger and malnutrition needs to be ensured by the government.