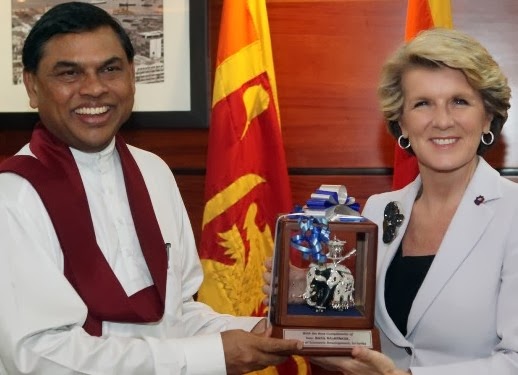 A new report has found that Australia’s cooperation with Sri Lanka to prevent would-be-refugees from seeking protection is riddled with human rights risks and should be stopped immediately.
The report, Can’t flee, can’t stay: Australia’s interception and return of Sri Lankan asylum seekers, which is based on interviews with government officials, information obtained through freedom of information requests and statements from the public record, reveals a deeply flawed suite of policy measures and practices.
The Human Rights Law Centre’s Director of Advocacy and Research and the report’s author, Emily Howie, said Australia’s efforts at ‘stopping boats’ are jeopardising the ability of Sri Lankans at risk of persecution to gain access to safety and asylum.
Ms Howie said that based on government data, 50 to 90% of the people who are intercepted by Sri Lankan authorities are likely to be asylum seekers.
“The entire approach is flawed because it fails to recognise that many Sri Lankans are in genuine and urgent need of protection. Instead of providing protection, Australia blocks their pathway to safety and puts Sri Lankan asylum seekers at risk of torture and mistreatment in the hands of Sri Lankan military and police,” said Ms Howie.
These risks are compounded by Australia’s domestic policy of forcibly returning Sri Lankan boat arrivals in Australia without conducting proper assessments as to their refugee status or monitoring their safety on return. The Immigration Minister has made it clear that his preference is for Australia to return all undocumented Sri Lankan arrivals.
The report recommends that Australia stop aiding and assisting systems of interception and return as the systems put people at risk of harm.
“Despite evidence that the majority of Sri Lankans arriving by boat are genuine refugees, Australia bases its treatment of Sri Lankans on the politically expedient assumption that they’re economic migrants,” said Ms Howie
The report is particularly critical of Australia’s ‘enhanced screening process’ that is applied to Sri Lankans. Enhanced screening is a truncated assessment process in which detainees have no access to a lawyer and no independent review of the decision is available.
“Enhanced screening is a flimsy short-cut and a grossly inadequate way to handle what are potentially life and death decisions. Sri Lankans have a legal right to have their protection claims heard properly – instead we subject them to a less rigorous process and expose them to harm on return,” said Ms Howie.
Australia claims that no returnees have been harmed upon return to Sri Lanka. However, HRLC has obtained documents through freedom of information that show one instance where Australia received a complaint that a returnee had been “severely tortured.” In that case the Australian Federal Police officer based in Colombo, despite being in the police building where the complainant was being held, declined an invitation to meet with the complainant to assess his well-being.
“This kind of monitoring is woefully inadequate considering the gravity of the complaints made. How can we accept assertions that nobody has been harmed on return when an official fails to take the most basic step to look into allegations of the most serious abuse,” said Ms Howie.
In light of the findings, Ms Howie said Australia must properly monitor the safety of the people that Australia forcibly returns by establishing a secure and confidential process within the Australian High Commission in Colombo.
The report also recommends that Australia conduct due diligence on Australian border protection partners to make sure that Australia is not training and working directly with individuals or units in the Sri Lankan military or police against whom there are credible allegations of serious human rights abuses, war crimes or crimes against humanity.
“Instead of pursuing a one-eyed obsession with ‘stopping boats’, Australia should work to improve the human rights situation on the ground in Sri Lanka and address the root causes of why people leave,” said Ms Howie.
Download here a copy of the complete report and appendices.
For further information or comments contact:Emily Howie, Director of Advocacy and Research, on 0421 370 997 or [email protected]
Share
Facebook
Twitter
WhatsApp
Pinterest
Email