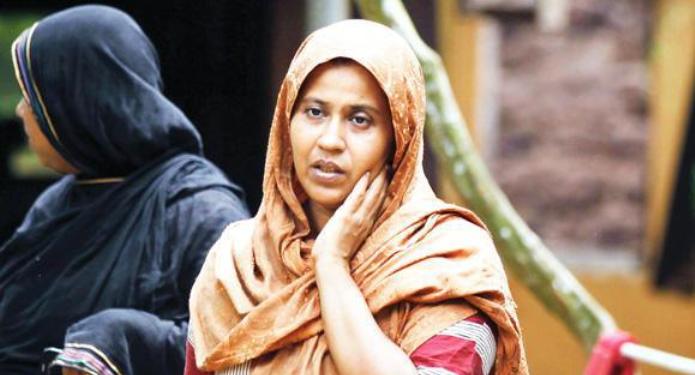 [DEVASTATED: A riot-victim grieves in Alutgama. (AP)]
By Secretariat for Muslims–

It is now two months after the anti- Muslim violence of Aluthgama and adjacent areas, and as is the case with most occurrences in Sri Lanka, media attention seem to have moved on now to other issues of importance. The Office of the High Commissioner for Human Rights investigation in to alleged serious violations and abuses of human rights and related crimes by both parties in Sri Lanka has commenced its activities as of June this year, and the government has appointed its own panel of experts for its own inquiry. Marauding monks have found other avenues to vent their anger as witnessed at the invasion of the meeting of families of the disappeared at the Center for Society and Religion in Colombo. But the inhabitants of Aluthgama await the completion of the housing renovations and most Muslims in other areas live in constant awareness of what happened and in anticipation of what else may happen in the future.

Looking at our records of hate incidents prior to Aluthgama the signs of what is to come are ominous. There are many speeches by the Ven. Gnanasara that state that the BBS will “take matters in to their own hands” if steps are not taken by authorities to address their issues. And what seems most prescient is a statement to the fact that promises violence to Muslims “If they ever lay a hand on a robe.” The general deterioration of relation at all levels is illustrated by the manner in which a mother was refused entrance to a school in hijab by the school principal, and how the same school prevented two school girls from wearing the shawl and long trousers with their school uniform (as per Education Ministry circular). The manner in which the students were humiliated by being made to remove their trousers while in school, and further the manner in which the courts tacitly endorsed such an action by asking that the parents consider moving the children to a different school are a reflection of the deterioration of relations and the general acceptance of anti Muslim sentiment in the public sphere.[1] News papers also reported that counsel for the respondents intended to challenge the correctness of a Supreme Court judgment delivered last year, which allowed Muslim girls to wear trouser and hijab in addition to the school uniform.

The bulk of the information recorded during this time refers to the BBS’s relentless campaign of press statements, interviews, and mass meetings during which hate sentiment together with a cultivation of paranoia about the loss of Buddhist numerical supremacy are asserted repeatedly.

Additionally during this time we saw the oft repeated government line in the form of both the categorical rejection of the idea that religious unrest is evident in the country, to the more nuanced dismissal of the accusations on the basis that the places that are attacked are either unregistered or illegitimate in some other way, and that the incidents were generally reactions of the communities of which they are a part.[2]

In the two months since Aluthgama much has happened. There are several cases in court, several international bodies including the Organisation of Islamic Countries, Office of the High Commissioner for Human Rights, and three Special Procedures Mandate Holders have responded to the incidents. Today the military is rebuilding broken and burnt homes and business premises. The government’s speedy response in relation to rebuilding is worth recognizing especially since compensation claims approved after the 2006 riots in Aluthgama are still to be paid. Although hate activities seem to be continuing we hope that the government’s response acknowledges both the seriousness of what happened and the need to prevent anything of this nature occurring elsewhere.

We send out this list for your informed and considered use. We will continue to document such incidents in the aftermath of Aluthgama with the intention of providing accurate information on what is happening to the Muslim community during this difficult time. We do so in anticipation of a post war future for Sri Lanka that promises freedom and justice for all and an end to the consistent smothering of its ethnic and religious minorities.
Read the report as a PDF here:Hate incidents against Muslims January – May 2014

[1] There were further developments to the case that are not covered by the news during this period. For more information on this issue see http://blogs.geegain.com/post/62594/the-failure-of-the-media-civil-society-and-the-moderates

[2] Prof. G.L.Peiris stated to Nisha Biswal( US Assistant Secretary of State for South and Central Asian Affairs) that legal measures were taken with regards to some and others were sorted out amicably. While we agree with this statement we regret the suggestion that reportage is either blown out of proportion or is misrepresenting of the larger project being undertaken by Buddhist nationalist groups.