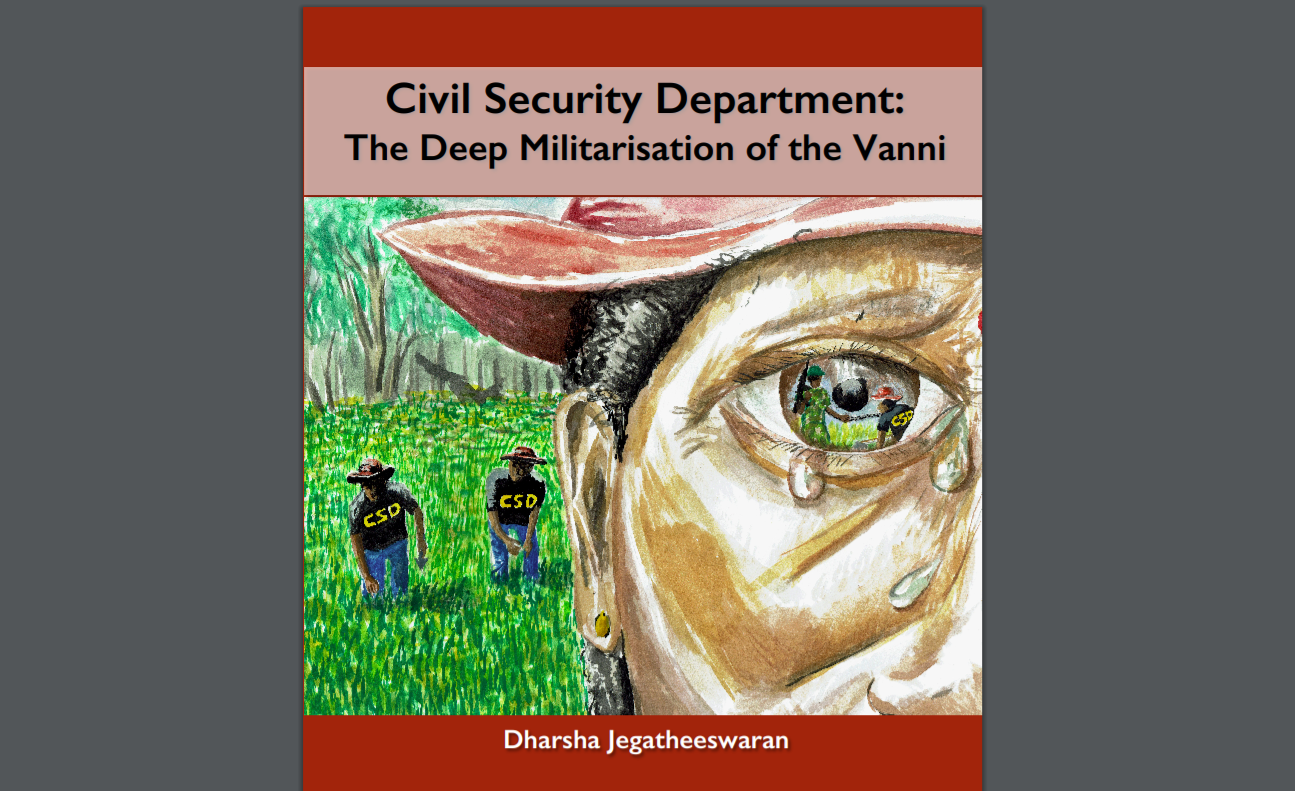 The CSD is a department of the military established in 2006 out of the controversial National Home Guard Service by then Secretary of Defence, Gotabhaya Rajapaksa. Originally envisaged as a volunteer security force, the CSD was largely operational in border villages and the Eastern province as part of a counter-insurgency strategy. However, as the report documents, post-2009, the CSD remade itself out to be a provider of economic development. Since 2012, the CSD has aggressively targeted former LTTE cadres and war-affected women in the Vanni to join its ranks. As of last year, the CSD employed over 3000 individual in Mullaitivu and Kilinochchi alone, making it one of the largest providers of employment in the region.

The report notes the increasingly militaristic character of the CSD through its implementation of mandatory one-month military training for all CSD farm employees, and the increasing presence of the military in pre-schools with CSD-paid pre-school teachers, among other things. The report also raises questions about the need to investigate gender-based violence by supervisors and soldiers on CSD farms and the suppression of political and civic activism by the CSD.

The Conclusion and Recommendations of the report fellows. ( PDF version of the full report is attached at the end)

Discussions on militarisation in Sri Lanka often revolve around the numerically large presence of the military in the North-East and their occupation of lands. But what this report on the CSD demonstrates is that the process of militarisation in war-affected Tamil areas, particularly the Vanni, goes far deeper and is far more complex than simply the amount of visible military structures and troops.

The CSD is an example of the way the State continues to militarise economic and civic spaces in the war-affected Vanni region. The CSD also symbolizes Sri Lanka’s failure to uphold its commitments to the international community to put an end to the military’s involvement in civilian activities, and work on meaningful security sector reform.

The growth of the CSD in the Vanni points to the larger issue of the Sri Lankan military’s failure to transition into a reduced post-war role. Instead, the military’s approach to its post-war role has been to embed and normalize the process of militarisation, thereby extending its control and subjugation of Tamil populations in the post-war Vanni. The CSD is very clearly a part of the military, and so its provision of livelihood opportunities though much needed, must be read as the creation of economic dependence on the military, rather than economic development. Through this dependence and because of its military character, the CSD also suppresses civic and political activism of its employees, and further marginalizes women employed as this report explains.

Alarmingly, a consequence of the CSD has also been the beginning of a destruction of community identity and cohesiveness. Consequently, the use of the CSD to militarise the economy and civic spaces in the Vanni must be challenged at the domestic and international levels. Tamil politicians and communities must also be more cognisant of the pressures and context in which individuals have been compelled to join the
CSD. Rather than denigrate and ‘traitorise’ CSD employees, it would be far more effective to work towards creating alternative forms of employment and push for the removal of the CSD from operating livelihood projects in the Vanni and a transfer of control over those projects back to communities.

Ultimately, permitting the military’s control over war-affected Tamil populations in the North will only further the cycle of conflict and will destroy any hopes of building a truly participatory democracy and sustainable peace.

1. In consultation with CSD employees in the Vanni, develop a process to transfer ownership of CSD agricultural and animal husbandry projects to civilian CSD employees and convert the farms into co-operatives.  Co-operative farms have a long history in the Northern province and are a model for agriculture that continues to exist in the Northern province.

2. Reimburse profits made from CSD agricultural and animal husbandry projects to the communities in which they are located, preferably in the form of assistance to the setting up of co-operatives mentioned in the first recommendation.

3. Put an immediate end to the mandatory military training being instituted for CSD employees, and the requirement that they wear military uniforms at events in public.

4. Put an end to the CSD paying the salaries of pre-school teachers. The budget for the CSD allocated for such payments should be re-allocated to the Ministry of Education. Issue a clear directive that the CSD and the military should have no role in educational activities in any form whatsoever.

5. Issue a clear directive to the military to cease and refrain from engaging in any civilian activities, in particular in the Vanni.

6. Permit open access into CSD farms and other places of employment for the Human Rights Commission of Sri Lanka.

7. Return any private lands being used by the CSD to its rightful owners.

8. End the practice of CSD-organized protests and civic action.

1. In consultation with the relevant pre-school teachers and after setting in motion transitionary arrangements, the Northern Province Ministry of Education to issue directives to pre-school administrators to stop receiving payments from the CSD for teacher salaries and ban any involvement of the military in educational activities.

2. Formally apply to the Central Government to transfer all state land used by the CSD to run farms and other economic activities to the Department of Cooperatives of the Northern Province. Through the Department of Cooperatives establish new cooperative societies which
will run the CSD farms or reallocate farms to existing cooperative societies in consultation with the CSD employees and the people of the Vanni.

3. Appoint a representative Task Force (including ex LTTE cadres, current CSD employees; both men and women) to study and report back on a framework for economic development and livelihood opportunities for ex-LTTE cadres and the wider community in the Vanni. Identify
pilot projects based on the above policy framework and implement with financial support from the Central Government / multilateral, bilateral donors/ private sector / Diaspora.

4. Hold regular consultations with CSD employees in relation to the above recommendations so that they feel heard and included in the community. Importantly, such consultations should not be an opportunity to denigrate CSD employees for their choice to work for the CSD, but rather to give them a space to voice their concerns.

1. Make the cessation of the military’s involvement in civilian activities a pre-condition of any military-to-military relationship building (in addition to other pre-conditions that should already be in place such as accountability).

2. Call on the Government of Sri Lanka to fulfil the above recommendations listed as part of their commitments under HRC Res 30/1 and 34/1.

3. Ensure that any aid or development assistance going into the Vanni is not inadvertently endorsing or supporting the militarised economy.

Read the full report as a PDF:ACPR-Report-Civil-Security-Department-The-Deep-Militarisation-of-the-Vanni-