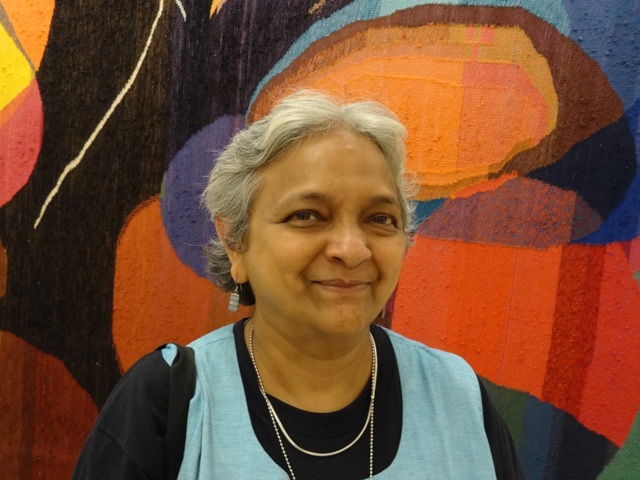 Ever since Sunila passed away 3 years ago, I have wanted to write about her, but found it difficult to articulate my experiences and feelings. There’s much that has been said by many about her. Among these, what Dayapala Thiranagama wrote about her two years ago has remained in my memory, as it captures much of the Sunila I knew, remember, celebrate and miss.

Below are some excerpts of how Dayapala, describes his first encounter with Sunila which led to their long years of friendship.

“I was waiting in my cell for yet another excruciating round of torture, which I had been subjected to since I had been abducted two weeks ago from my university boarding house. All of a sudden, a young, smartly dressed woman, of middle class appearance was standing in front of my police cell. She called me by name. This was the first visitor I had seen since my capture. CID had not recorded my abduction or my presence in the police station and did not allow anyone to see me. My torturers told me that I would not be going home this time. Sunila and I started our friendship in these extraordinary circumstances. Her courageous presence before my police cell, even for a few minutes, ensured that there was a witness to my abduction and torture.”

He goes on to say “She used to visit detainees at police stations, prisons and other places such as those who were living underground, to offer vital support to them when necessary. Such visits had a profound effect on those she helped. Much of the help she gave others was not widely (known) but was invaluable to those people. One such example was her support and help when my wife Rajani was assassinated by the LTTE. I was still underground and Sunila undertook the most difficult task of organising my safe passage to Jaffna to attend Rajani’s funeral. Sunila also led a group of activists from the South to join a protest march in Jaffna town one month after Rajani’s assassination. In Colombo Sunila organised a commemoration meeting around that time.”

Sunila was probably the most sought after, celebrated and well known Sri Lankan human rights and women’s rights activist nationally and internationally in recent times. She won prestigious awards and held many positions. But that is not what I remember her for.

Her approach to activism – and I mean practice, not preaching or teaching – has had a profound influence on me. I consider Sunila to be one of my two main mentors (other being Fr. Tissa Balasooriya) and I’ve been fortunate to have been with Sunila and watched her “in action”. As she confronted military personnel on frontlines of the war in the East in 2007, trying to reach populations in areas that were cut off. As she negotiated with Police who were trying to disrupt a protest in front of the Fort railway station. When she was talking to the then UN High Commissioner for Human Rights in Geneva, Diplomats in Colombo and the then Minister of Human Rights. When she was asking uncomfortable and thought provoking questions during a training on gender and sexuality. And maybe most importantly, when she spent time visiting and talking to families of disappeared persons, displaced and others affected by war and violence.

Much of what I have learnt about fact finding in dangerous and difficult circumstances, doing documentation and sharing personally sensitive and politically explosive stories, providing protection to those whose lives were at risk and engaging in lobbying and advocacy comes from Sunila. It was about ethics, principles and attitude, as much as it was about skills. It was about why we were doing these as much as how.

Looking back now, I also fondly remember the scoldings I got from her, with a strong flavor of love and care – for me and others. For instance, the wrath I had to face when she found out  that a pregnant colleague had gone with me to Jaffna at the height of the war in 2008.

I remember how comforting it was to have been able to call and talk to her when I was being held up for hours at an Army checkpoint one evening in 2008, near the frontlines of the war in Mannar. She insisted on staying on the phone most of that time. And she took the opportunity to scold me for having ventured there, for dragging others into danger and returning at a time she considered to be too late. Later in 2009, I came back to Sri Lanka, after a colleague was arrested while I was in India, disregarding a SMS from Sunila suggesting for me to stay on there. She didn’t say anything afterwards. But weeks later, when threats were getting serious and imminent, she called from overseas and instructed me to leave Sri Lanka immediately. I obeyed. While I was in exile, we talked regularly and she helped me assess the security situation and challenged me to return to Sri Lanka after a few months, without ever pressuring me. Among the many times I wished she was alive was on the lonely and scary night that I was arrested and detained. Later, after my release, as I was discredited and marginalized by friends, relatives and even some activists, I felt sure she would have been among those who would have warmly embraced and welcomed me.

Memories of Sunila also consist of some good times even during the worst of times. Good food, drinks, stories – in her house in Maharagama, in Batticaloa, Geneva and Bangkok. When I was living in Bangkok, she was the most frequent visitor from Sri Lanka. She regularly brought me ginger beer, arrack and Sinhalese newspapers, and rarely did we miss watching a movie together. The few days I spent with her in her apartment in Kuala Lumpur while I was in exile in 2009 and the week I spent with her in The Hague in 2013, as she was battling cancer, will remain as the most precious days I’ve spent with her.

Today in Sri Lanka, there are changing ground realities, shifting political positions and alliances, debates on compromises and realism, and blurring of lines. As we search for meaningful, principled and relevant ways of activism, meeting up to different expectations of diverse survivors and families of victims, Sunila is greatly missed. Trying to carry forward even a small part of her legacy remains a great challenge.

Compared to many other activists, I’ve only known Sunila for a short period. But it has given me much to remember and much to celebrate about Sunila. Enough to miss her greatly.