Relatives in quandary over missing men 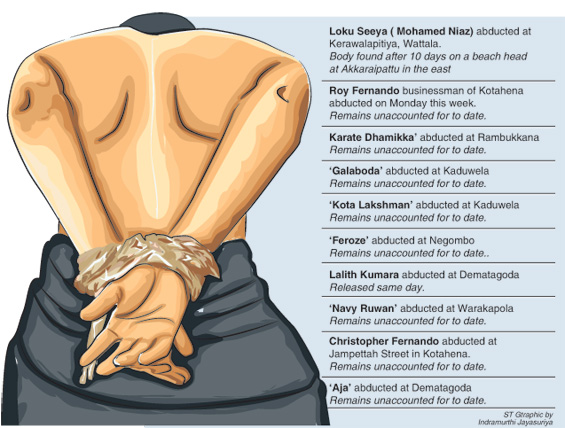 Loku Seeya’s body found dumped in sea in Akkaraipattu; Karate Dhamikka’, ‘Galaboda’ , ‘Kota Lakshman’ ‘Feroze’ ‘Haja’ ‘Navy Ruwan’ and Christopher Fernando still unaccounted for
Leon Berenger
Mystery surrounds the abduction of some nine people over the past two months, with anxious relatives waiting for them to return home and police saying that the hunt is on for those listed missing.

According to eye witnesses to these abductions that took place in several parts of the country, both in the day time and at night, the victims were bundled into a white van and driven away by a group of armed persons.

One of those abducted returned, seven remain unaccounted for, and one man’s body was fished out of the sea at Akkaraipattu, police said. The most high profile person among those abducted and killed was the 57-year-old man from Ragama, Mohamed Niaz. Widely known as ‘Loku Seeya’ he was a multi-billionaire who dabbled in witchcraft and had a large and affluent client base.

He was reportedly abducted from a lonely clearing at Kerawalapitiya, in the Wattala police area on October 27 while driving his plush Mercedes Benz from his devale at Thalagolla in Ragama to his home situated a short distance away.

Eyewitnesses had told family members that he was grabbed by four men who had arrived in a white van shortly before dusk. They had sped towards the Colombo-Negombo Road. The Mercedes Benz was later found at the scene of the abduction.

At the time of the abduction the man was sporting jewellery valued at Rs. 3.5 million and when they found his bruised and battered body some 10 days later on a beach head at Akkaraipattu in the east, the gold was missing.

“My father earned a lot of money by providing spiritual favours to his clients, and the list of those seeking his help was always long. They included high-profile politicians, artists, policemen, doctors, lawyers,” says Mohamed Hisan, the elder of the dead man’s two sons, known as podi seeya. He said that his father’s clientele was a mixed bag that even included top politicians in the present government and was not known to have any enemies.

“This whole thing is a conspiracy, somebody somewhere wanted my father dead for reasons known only to them, and what makes matters worse are the rumors doing the rounds,” the son said.
“Some say he was killed by a state-sponsored hit squad while others say he was linked with the local drug cartel and therefore put down by a competitor and this was even endorsed by sections of the Sinhala media.

“This should not be the case. The authorities have informed us that an investigation is underway and those responsible would be brought to justice at the earliest,” he added. He however added that it was disturbing that those behind the abduction were able to travel all the way to Akkaraipattu passing so many police and military checkpoints undetected.

“There is something fishy somewhere and this is what the authorities should be looking at,” he said.
“In addition, my father was also a philanthropist involved in a lot of charity work and he crossed all borders let it be it race, religion, caste or creed. Therefore it is difficult to assume that he had any enemies.

Perhaps the only time he received veiled threats was during the annual devale perehera held in August each year. But he never took these things seriously,” Mr. Hisan who is now carrying out his father’s work added.

Roy Fernando is the nephew of Christopher, a businessman of Kotahena who was abducted on Monday in a similar fashion. His whereabouts are not known to date. Mr. Fernando, who is also a member of the Colombo Municipal Council for the ruling United People’s Freedom Alliance (UPFA) told the Sunday Times that they had made a complaint with the local police but were yet to receive any news of his uncle.

As in the case of ‘Loku Seeya’ from Ragama, Mr. Christopher was also not known to have any known enemies and was not at the receiving end of any threats. “This has taken all of us by surprise, and the family is shaken. My aunt is suffering from shock and anxiety after hearing the news. We do not know who is responsible, but we hope he will return safely,” he added.

He said that he had also taken the matter up with the highest authorities. Apart from being involved in business, Mr. Christopher is also known to be a big time money lender. Others who are still missing include ‘Karate Dhamikka’ from Rambukkana, ‘Galaboda’ and ‘Kota Lakshman’ both from Kaduwela, ‘Feroze’ from Negombo, ‘Haja’ from Dematagoda, ‘Navy Ruwan’ from Warakapola and Christopher Fernando from Jampettah Street in Kotahena.

According to police a wide investigation is currently underway with several trained policemen on the job.
“This group of abductors could be anyone from common criminals to contract killers or even a vigilante squad. Investigations into those persons missing also indicate that though some of them boasted of wealth most have questionable records and their respective aliases only goes on to endorse it,” a senior policeman said.

“However, those responsible for these abductions and killing have to be brought to book before the matter matures into a full blown crisis with individuals taking the law into their hands,” he said. 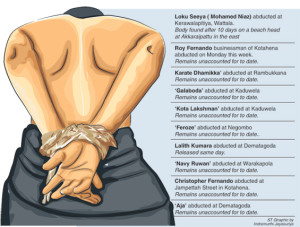