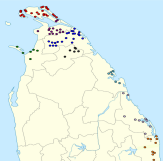 Last March, The Social Architects (TSA) released its third report, “The Numbers Never Lie.”
The report provided extensive information about the Government of Sri Lanka’s (GoSL) progress in implementing the Lessons Learnt and Reconciliation Commission (LLRC) recommendations. Again, TSA’s partners undertook a similar survey this year. Using the data obtained last year as a baseline, TSA will be releasing two companion reports reevaluating Sri Lanka’s LLRC progress. This is the first.
This year’s survey was only conducted in the Northern and Eastern provinces; this was done during January 2014. TSA’s partners surveyed 1,200 people this year, but 157 survey respondents were subsequently disqualified. 376 other people who participated last year did not participate in this year’s survey. This figure includes people who have moved elsewhere or have been resettled. It also includes community members who decided not to participate this year due to fear. Hence, all 1,043 people that were surveyed this year also participated in last year’s survey. In order to accurately measure progress, TSA removed 533 people (those who did not participate in the 2014 survey) from last year’s survey results.
(Read the report by clicking here)
TSA’s sample covers 8 districts, 36 Divisional Secretariat (DS) divisions, 108 Grama Niladhari (GN) divisions and 264 villages. 368 survey participants are Woman-Headed Households (WHH). TSA’s questionnaire (224 questions) has been designed to capture different types of information. This includes factual data – such as information about arbitrary detention, disappearance, death, injury and compensation. Some parts – including questions on militarization and sections dealing with political rights and language rights – capture both factual data and perception data.
TSA’s survey findings suggest that – while some very limited progress related to a few LLRC recommendations has been made over the past twelve months – there are still concerns about matters such as political rights, language rights, inclusive development and compensation, among other areas. The country’s continued militarization, the concomitant culture of fear which pervades the North and East, and the asymmetrical implementation of the LLRC recommendations are also concerns. TSA will delve more deeply into all of these topics in its next report