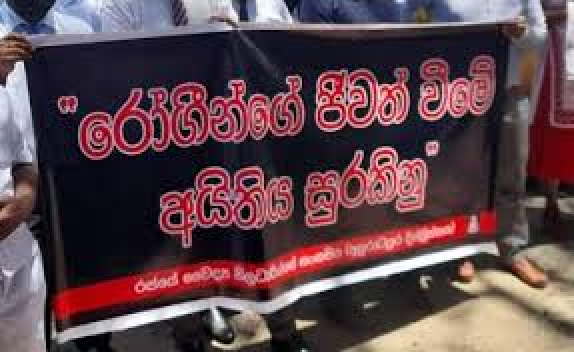 Image: The banner says ” protect the right to life of patients”

With mixed views whether the retirement and migration of medical specialists would impact on the state health sector, the Sunday Times took a deeper look into the issue which would have a serious impact on patient care.

For the men, women and children, the most important factor – whatever administrative issues assail the state health sector or differences of opinions that seniors and juniors would have – would be that they get uninterrupted quality healthcare both at the centre and the peripheries.

While some of the young specialists were vociferous that “oldies” over the age of 60 were clinging onto “end” or “favourable” stations in the big cities because they were “only thinking of private practice”, numerous senior specialists were insistent that no such thing was happening.

The background to the retirement age, as given by doctors is:

n In the recent interim budget of 2022 – the retirement age of all public servants was slashed to 60 years. However, a media release issued by the Secretary to the Public Administration Ministry on November 1, 2022, states that the 60-year retirement rule does not apply to those professions which had an amendment to the retirement age earlier. Later though this was ignored. Otherwise it would have meant that the 63-year retirement age applied to doctors including specialists and nurses.

In the state health sector, the usual practice is for a young medical specialist [having received certification from the Post Graduate Institute of Medicine (PGIM) after the final phase of overseas training] to return to Sri Lanka, serve in the peripheries gathering experience and also seniority and then be posted to a favourable station. Such postings would be dependent on availability, with those in certain specialties getting a place sooner and others later.

This is where the bone of contention has arisen between the senior and junior specialists, with some juniors alleging that they are not being given a chance to come to favourable stations.

The grouse is that young specialists are facing many challenges, that they are living in difficult conditions in the peripheries, their families are split if they wish to send their children to good schools with facilities in the main cities, otherwise their children are getting a sub-standard education, they have to run two homes, travel back and forth etc.

These young specialists allege that the health sector would collapse not due to the retirement of unproductive elderly specialists but due to the loss of juniors as a result of old specialists who force the juniors to stay in unfavourable stations, which in turn compels the latter to migrate.

Looking at the overall picture, a specialist pointed out that there was no huge exodus of doctors or protests from juniors in 2018 when the retirement age was raised to 63 years and was in operation for four years. Then too, if the current argument held, juniors could not come to favourbale stations. The current brain drain is not because of retirement issues but due to the economic crisis in the country. The migration is also not just from the peripheries but also favourable hospitals including the big ones in Colombo.

“What a group of juniors is trying to do is queue-jump without awaiting their turn for duty at favourbale stations as has been happening over the years without an issue,” he said, stressing that with the current retirement at 60 years, a group of specialists who turn 60 would get the short end of the stick. They have been serving in the peripheries without getting their places at these favourable stations due to the 63-year retirement rule in 2018. Now they would be completely bypassed. Is it fair to bypass this group of around 200 and deprive them of favourable stations?

Others pointed out that the brain drain is not due to seniors holding onto posts because there is also migration from several clinical departments in medical faculties.

Another specialist who has analysed the situation says that three factors would impact on the state health sector – the ‘natural’ retirement at 63 years; the ‘forced’ retirement at 60 years; and the migration of specialists.

Around 340 specialists are set to retire as at December 31, 2023 (this year) from the state health sector, she says, pointing out that in addition to this gap other vacancies would arise impacting on patient care.

These vacancies would be due to migration, vacation of post and leaving the state sector to join universities, the private sector or the semi-state sector (Sri Jayewardenepura General Hospital, Neville Fernando Hospital or Kotelawala Defence University Hospital).

Referring to anaesthesia and intensive care, a source said that this major specialty is essential to maintain all surgical services, maternal and childcare services and also major diagnostic and interventional services such as neuro-radiology, CTs and MRIs. Now there was an imminent danger of it being affected.

A crisis is also looming in the ophthalmology (eye) field, where there would be a massive dearth of specialists.

Warnings and appeals are also flowing fast and furious from other specialties. “Prevent the collapse of vital services including many working behind the scenes such as the National Blood Transfusion Service (NBTS), the Medical Research Institute (MRI) and histopathology,” they say.

As no Transfusion Specialist at the Karapitiya Hospital, patients with pulmonary (lung) haemorrhage due to leptospirosis (rat fever) do not have access to management through ‘Therapuetic Plasma Exchange’ or plasmapheresis. This management has seen a drastic reduction in the death rates of such patients in recent times.

Crucial too are the services of the MRI which cover the whole country. It performs tests on around 1.5 million samples each year, some of which are not done in the private sector. The MRI also ensures the quality control of vaccines and conducts important national surveillance programmes such as iodine deficiency in pregnant mothers, children, thalassaemia and dengue, among many other tasks.

Immediate measures are also being requested to prevent the collapse of the histopatholgy service under which around 3,500 biopsy specimens are evaluated for the management of many diseases mainly cancer.