Red Alert: Is a Black July being threatened through the state media? 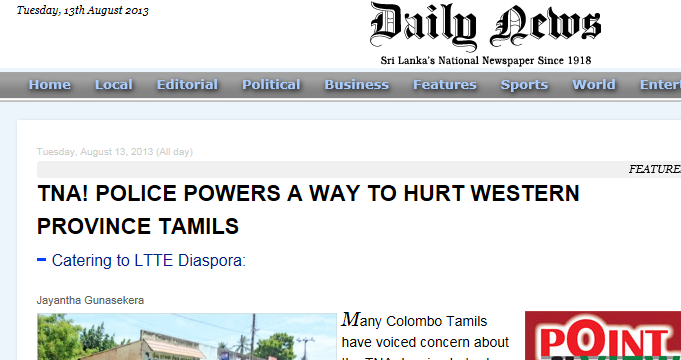 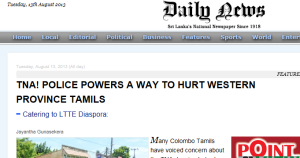 Dr. Dayan Jayatilleka
A spectre is haunting Sri Lanka: the spectre of Cyril Mathew. Are the Tamils of the Western Province regarded as potential hostages in the event of a TNA victory in the Northern Provincial Council and a legitimate assertion of Constitutional rights by that Council? Is a veiled threat being issued through the state media that Tamils in the Western Province will be targeted if the TNA and the Northern Provincial Council do not behave with due obsequiousness?

A shocking article to that effect appears in the Features page of the Daily News this morning (Tuesday, August 13th, 2013) under the caption ‘TNA! POLICE POWERS A WAY TO HURT WESTERN PROVINCE TAMILS’ and bearing the subheading ‘Catering to LTTE Diaspora’. The purported author is Jayantha Gunasekera (a name which, incidentally, rings no bells in me as decades-long reader of the Sri Lankan English language press). If this threatening diatribe had appeared on a website of the Sinhala racist lunatic fringe, it could be ignored. When it appears in the pages of the flagship newspaper of the State, it takes on a quite different dimension. Though it is billed as Point of View, no respectable newspaper carries ‘points of view’ which clearly amount to incitement and hate speech. Still less should the (sole) State-run (English-language) daily do so; a paper whose sense of responsibility should be far greater, since the implications of hate speech appearing in its pages are far more serious.

What does the article say? Here are a few extracts:

“Many Colombo Tamils have voiced concern about the TNA drawing hatred towards their community by playing communal politics. Everyone of them feels secure now, to engage in their businesses and their professions unlike when the LTTE held sway killing innocent people at random.

Police and Land Powers bestowed on the Western Provincial Council can endanger the businesses, properties and liberty of over one million Tamils living in Colombo and the suburbs. ..

…Tamils who live in the Western province will have to exert pressure on the TNA, not to endanger their businesses, their properties and their liberty by the TNA catering to the LTTE diaspora agenda, for a mess of pottage.

It is common knowledge also that handsome allowances are doled out by the LTTE Diaspora. Lured by these handouts they are obliged to adhere to the instructions given to them. They are instructed as to the manner in which they should act, to achieve a SEPARATE STATE OF TAMIL EELAM, through Police and Land Powers. This is High Treason.

Does the TNA want the Army withdrawn or drastically reduced from the North to facilitate them to start violence in order to create a separate state?

Do they think the present government is so gullible as to fall into their trap? If Police Powers are given to the Northern PC, police officers who will be under the Chief Minister will be legally carrying weapons, which is now illegal. Most policemen could be drawn from the LTTE “boys”, who have escaped the long arm of the Law. The LTTE Diaspora will nominate the police force, from the LTTE loyalists in the North.

Actually, the TNA should be asking for a Separate State in India, the historical homeland of the Tamils. They should be asking for a separate state in Canada, UK or France, where they are residing for generations in very large numbers among politicians who are so sympathetic to them and their cause. They should be asking forthwith for Police and Land powers in these countries, in areas where they live in large numbers. Let them not endanger the lives of and property of Colombo Tamils and the peace-loving Northern Tamils, who have heaved a sigh of relief, that at long last they have been released from under the jackboots of the LTTE, with the end of the war in 2009.

Statistics indicate that of the 11 per cent Tamils of Sri Lankan origin, 4 per cent are scattered mainly in the Western countries. Of the balance 7 per cent, one half are living in Colombo and the WP. Only a MINISCULAR live in the North and East!

Among those who live in the South are professionals – lawyers, doctors, engineers, accountants. Many are in the corporate sector occupying high positions as chairmen of conglomerates. Quite a number are in business. Most of the imports such as sugar, potatoes, dhal, onions etc are in the hands of Tamil businessmen. All these Tamils function without any hindrance from the Central Government or the majority community. We wish to tell the TNA, do not draw hatred towards all Tamils by your communal minded attitude.

Ask anyone of them whether there is any impediment to their engaging in their professions or in their businesses. Some of them have plush residences in Colombo 3, 5 and 7. Many live in their own residences in Wellawatte, Kotahena and the suburbs. During the 30 year war, they were adequately protected by the State and the majority community, which has been conveniently forgotten.

If Police and Land Powers are given for instance to PCs in the WP, these Tamils (who are now living in peace and harmony) may have their peace and tranquillity disturbed by Provincial Councillors, who will be in full control of these powers.

The Tamils in the Western Province should realize that they cannot have a tranquil life, engage in their professions and businesses, and at the same time have a separate state in the North. If they think they can have the cake and eat it as well, they are greatly mistaken.

…The Northern Tamils are bereft of intelligence to see the true nature of the TNA and would be made to vote on communal lines. Therefore victory of the TNA they think is assured. The Tamils in the North are so ungrateful that all the improvements – all the money spent on them, will be lost.

They are people who lived in absolute terror and squalor for over 30 years, without a hum, under that madman Prabhakaran, and ran over to the government controlled arrears in the last days of the war, for a better life. Yet their mental capacity is so low, they will vote on communal lines. The sooner the government realizes this, the better.

…Building macadamized roads, railways, hospitals with modern equipment in the North, with the money of mainly the Sinhalese, is lost on the Tamils there. They will vote on communal lines, on the basis that blood is thicker than water, although they can see that their representatives couldn’t care less about their well being. They haven’t the brains to understand that if the government stops all improvements in the North, the TNA is unable to improve their lot.

The LTTE Diaspora will not see to their comfort and happiness. If the government ceases to develop the North, it will soon revert to the pre-2009 era, and resemble a bombed out country, with no facilities whatsoever. The whole world saw what the LTTE had NOT DONE for the North during the 30 years they held this area under their sway.

…As to how long the Tamils living in the South, along with the Sinhalese and the Muslims of this country, will tolerate the TNA from arousing communal passions, is to seen. For how long the TNA will escape the long arm of the Law for committing acts of High Treason, is also yet to be seen. How long they will continue to draw salaries from the Sri Lankan government, get vehicle permits (worth twenty million rupees), and other perks, and also act as traitors, is to be seen soon.” (All emphases mine-DJ)

The message is clear and it is a two pronged threat. The TNA is The Enemy, hell-bent on Tamil Eelam with the support or at the behest of external elements. The Tamils of the North are low IQ ingrates who will vote for them. If the Govt pulls the plug on development those Tamils will see a sharp drop in their living standards. Translated, this is the threat of a Gaza type economic blockade, or the type of economic blockade that Lalith Athulathmudali imposed on the North during the war in the mid 1980s. The second part of the treat is far more explicit and deadly. Far more Tamils live outside the North. Their “lives and property” stand in jeopardy and are actually or potentially hostage to good behaviour as perceived by the most militaristic and chauvinistic elements of state and Sinhala society. This is nothing less than the threat of another July ’83.

This is an early warning sign and must be taken with utmost seriousness. For years before July ’83, the then Minister of Industries and Scientific Affairs was making speeches and sending printed material reeking with animosity towards Tamils. Devanesan Nesiah recently revealed that President Jayewardene had disclosed to the TULF well before 1983 that there were elements planning violence against the Tamils.

30 years after July ’83, when an English language newspaper owned and run by the State can feature as a legitimate ‘Point of View’, inflammatory and toxic writing such as that of ‘Jayantha Gunasekara’, it reveals not merely an abysmal plummeting of journalistic and editorial standards. It is evidence of what is now seen as legitimate discourse. Worse still it arguably affords a glimpse of the ideology that may lie beneath the lid of some apparatuses, auxiliaries and proxies of the state. It is an early warning that the Northern Provincial Council election, instead of constituting a portal to a better future, may trigger a reaction from the dark underside of the Sinhala psyche and the more totalitarian elements of the State itself. This reaction would not only entail a de facto ‘state of siege’, sabotage, provocation, economic strangulation, subversion and de-stabilisation amounting to a coup against the Council, but also the holding of the Tamils outside the North as a human shield and hostage for coercive collective punishment.

This after all, was the demented logic that led to July 83. Of course in 1983, there had been no unanimous agreement at a World Leaders Summit of the UN, as there was in 2005, enshrining the concept that when and if the national state is unwilling or unable to protect its own citizens, that responsibility to protect, following endorsement by the Security Council, devolves on the international community.

[Dr Dayan Jayatilleka was Chairperson/Rapporteur of the Intergovernmental Working Group on the Effective Implementation of the United Nations’ Durban Declaration & Programme of Action against Racism, Racial Intolerance, Xenophobia and Related Forms of Intolerance. He has served as the Sri Lanka Ambassador to Geneva and Paris. ]