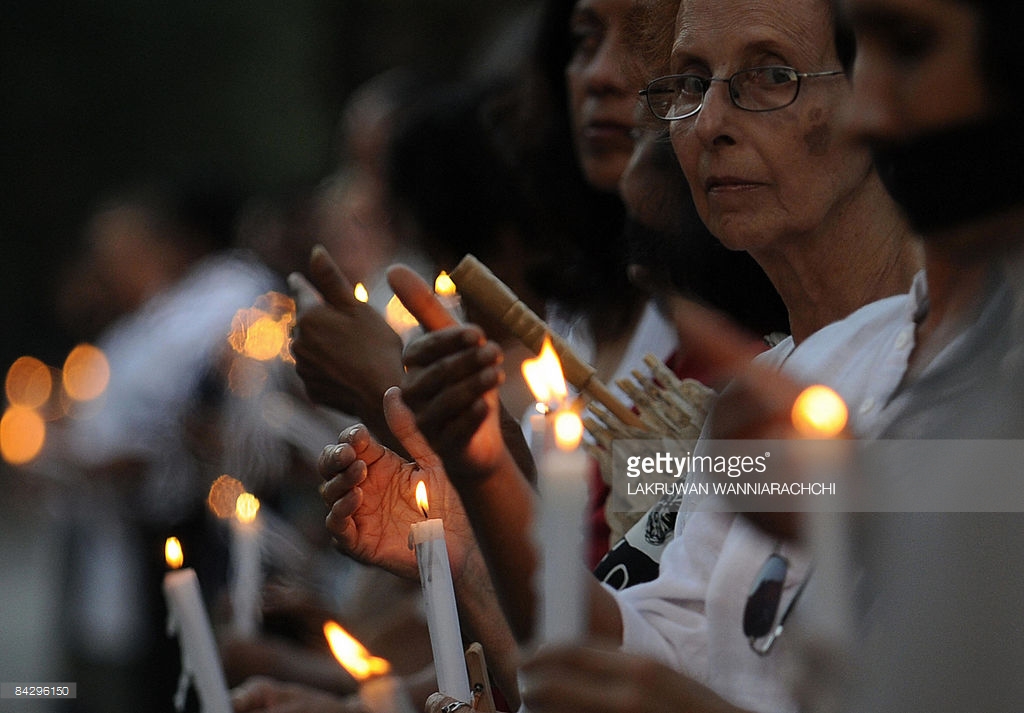 Image: Members of a Sri Lankan civil society organisation participate in a candlelight in memory of the slain editor of the Sunday Leader newspaper Lasantha Wickrematunga, in Colombo on January 15, 2009. The editor of Sri Lanka’s Sunday Leader newspaper, Lasantha Wickrematunga, was gunned down just outside the capital on January 8, 2009. AFP PHOTO/Lakruwan WANNIARACHCHI.

It is now over two months since the constitutional reform process effectively went into abeyance, with the indefinite postponement in January of the submission of the Steering Committee’s Interim Report to the Constitutional Assembly for debate. Substantial work was undertaken during 2015, including the work of the Public Representations Committee, the Subcommittees of the Constitutional Assembly, and the Steering Committee. But the fact that there has been no progress at all on constitutional reform during the first quarter of 2017 is now cause for increasing anxiety.

Constitutional reform was the central rationale for both the change of government and the formation of a government of national unity in 2015. The current distribution of parliamentary representation is also one of the most propitious for building the political consensus necessary for long-needed constitutional reforms. For both these reasons, dissipating – the still available but fast diminishing – window of opportunity for constitutional reform would be a mistake of historic proportions. If it is missed, then it is unlikely we would get another for at least a generation: to reduce executive dominance and centralisation, to enhance the role of parliament, to strengthen constitutional rights and freedoms, and to ensure both devolution to the periphery and power-sharing at the centre.

These reforms are badly needed to ensure democracy, constitutional government, and reconciliation, and to re-lay the foundations for a strong, stable, united, and peaceful Sri Lanka. It is clear that these basic reforms require a new constitution. Piecemeal reforms would be wholly inadequate. A new constitution requires a referendum – which must be won by the government for its own survival –  and this in turn underscores the scale of the project.

We do not assume constitutional reform is an easy task. Even with the cooperation of all and the best will in the world, constitution-making involves the negotiation of difficult questions and disagreements. It would seem therefore that efforts must be redoubled towards restarting the deliberations in the Constitutional Assembly process. The President and Prime Minister must give decisive leadership to this process. As the first step, they must ensure completion of the Interim Report, which should set out the general principles that would guide the drafting of the new constitution. Once this is debated and approved by the Constitutional Assembly, the painstaking task of drafting a Constitution Bill can begin.

Alongside the recommencement of the official process, there are a number of matters to which the government must urgently address itself. The most important task is to develop and implement a strategy of political communication on constitutional reforms. It is abundantly clear that a vast section of the Sri Lankan public has no awareness of what is transpiring in respect of constitutional reform. It is unclear to what extent even elected politicians beyond those directly involved are aware of what is going on. This generates public apathy and allows anti-reform forces to control the political narrative. It is alarmingly clear that these forces are re-grouping, and if they are allowed to succeed, they would hold back the social, political, economic, and constitutional progress of our country for decades. The government must act fast to regain the initiative in this regard and ensure conducive conditions for the constitutional referendum to come.

The President and Prime Minister must work together to ensure that their respective parties are fully behind the government’s programme, and that all members of the government speak with one voice on constitutional reform. They must act as a government of national unity at least until the historic purpose of delivering a new constitution is achieved. Civil society supported the electoral changes of 2015 on the premise that a government of national unity would ensure the constitutional reforms outlined above. We remain committed to supporting a process for a new constitution. However, it is now time for the President and the Prime Minister to infuse a sense of purpose, direction, and urgency to this task.