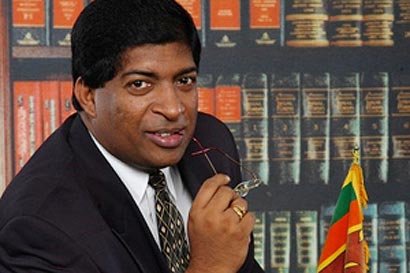 Hon. Speaker,
I wish to raise an issue of breach of privilege, where my reputation as an honorable member of this august assembly is at stake. I have been a Member of Parliament continuously for over 19 years & at no time I have behaved in a manner that has brought disrepute to myself or the position I hold.
The Independent television Network (ITN) news broadcast has been carrying out a well orchestrated vilification campaign against me as an MP as well as a law abiding citizen of the country.

The daily newspapers “Ceylon Today” and its sister paper “Mawubima” are in league with the ITN in carrying out this   campaign.

First I did not take much notice of it but the continuous attacks has brought me to a situation that cannot be ignored anymore. Initially they picked on a totally legitimate programme carried by our Party the UNP in association with the German sponsored Organization, namely the Friedrich Naumann Foundation projecting it as a conspiracy to topple the government.

Sir, the role of the opposition in a democracy is to strive for power thru all democratic means.

“Ceylon Today” & “Mawubima” daily carried false news items as their lead news trying to connect me with their story. Appropriate correction has been sent by the Mayor of Colombo on these two news items, while the Leader of the Opposition, our Party Leader Hon. Ranil Wickramasinghe & the Parliamentary group of the UNP has already brought this issue to your notice.

As a follow up to the newspaper articles, the ITN news department commenced their unscrupulous vilification campaign by targeting the Freidrich Naumann Foundation and its Country Representative Ms. Sagarica Delgoda.

Mr. Speaker, Freidrich Naumann Stiftung of Germany has been working in Sri Lanka for 45 years on a Memorandum of Understanding with the Government of Sri Lanka. They are engaged in promoting liberal values & democratic principles and works with like minded organizations and people to promote, the rule of law, good governance, market economy etc. I am personally aware that many honorable members of both sides of this house have benefitted immensely by participating in programs organized by the FNF locally & internationally.  Hon. Sarath Amunugama, Prof. G.L Peiris, Hon. Rajitha Senaratne, Hon. Mahinda Samarasinghe, Hon. Keheliya Ramukwella, Hon. Dilan Perera, Hon. Navin Dissanayake, Hon. Manusha Nanayakkara, Late Jayaraj Fernandopulle & Nalanda Ellawala  are  only a few  of the government members who had participated in the programmes organized by the Freidrich Naumann Foundation.  Hon. Prime Minister was the Chief Guest at the Dudley Senanayake Oration in 2011.   I am aware that the Central Bank Governor Mr. Nivad Cabraal has worked closely with the Organization for many years. Therefore it is unfair to categorize them as partisan.

Institute for Democracy & Leadership is one such Organization that the FNF has extended its partnership as the vision & the objectives of the Institute for Democracy & Leadership matches with their principles.    The Institute for Democracy & Leadership, has been in existence since 1998. It is the successor to the DEMOCRACY GUILD an initiative of the late honorable Lalith Athulathmudali in 1991. He was a great believer in liberal democracy who ultimately sacrificed his life for the cause. IDL has been engaged in civic education, Leadership & capacity building programs for young leaders based on liberal principles. Ms. Shyamila Perera Attorney at Law is the Executive Director & Mr. Sandun Gamage Attorney at Law is the Project Director. There are many professionals who work with the Organization & they are all volunteers.  There are some Members of this house as well who have benefitted by training & working with IDL & FNF. At no time during this period IDL or any of its members have either had any links or dealings with any anti national organization or persons & particularly with the Tamil Diaspora as alleged in ITN news. IDL will never engage in any activity that would undermine Sovereignty of the country or the cherished ideals of its founder.

Mr. Speaker,
The daily News bulletins of ITN from the 17th to 23rd May & once again on 27th   28th & 29th May, carried lengthy news items on an alleged Freidrich Naumann /UNP conspiracy. In these news segments they dragged in the Institute for Democracy & Leadership, Ms. Shyamila Perera Mr. Sandun Gamage & myself in to the conspiracy. The news stated that Ms. Shyamila Perera went to India on 10th January 2010 to attend the funeral of Thiruwengadam Velupillai father of Velupillai Prabhakaran & she represented the Freidrich Naumann Foundation and carried funds for the funeral. Further in order to drag my name in to this concocted story they also stated that I sent a message of condolence thru her that was handed over to the funeral committee.

This is a totally fabricated story planted by the ITN news producers. At no time did Mrs. Perera attended the said funeral or visited India during this period nor did I send any condolence message.  Further, I’m informed that the funeral of Thiruwengadam Velupillai we held in Sri Lanka & not in India. ITN, an institution that is being run by the tax payers money, should first check their facts as well as the credibility of their so called reliable informants before they set out to malign innocent people.

The news item also state the project Director of the Institute for Democracy & Leadership, Attorney Mr. Sandun Gamage together with Western Provincial Council member Harshana Rajakaruna went to Geneva to co ordinate activities with the Geneva Human Rights sessions. They also emphasized that this work was coordinated by Ms. Sagarica Delgoda, of the Freidrich Naumann Foundation, Shyamila Perera & Myself from the Institute for Democracy & Leadership there by making us all partners of this imaginary conspiracy…

I state that all this information is totally false & defamatory and without any substance. I have been informed that Mr. Gamage has not visited Geneva for any reason in the recent past & that Mr. Rajakaruna has never visited Switzerland in his life. Once again in order to implicate me,  they  stated that the coordination activities against the country between Freidrich Naumann Foundation & the Tamil Diaspora is handled by the Institute for Democracy & Leadership office. This is once again a diabolical lie.

Mr. Speaker, the motive to all this mudslinging was revealed in the news bulletin of 27th May where they said “We are also receiving more information of the activities carried out by the UNP MP Ravi Karunanayake against the country. We will reveal more details on the programmes launched by Sagarica Delgoda, the UNP Naumann Parliamentarians headed by Ravi Karunanayake against the country maintaining close links with number of countries” They added a new charge that I together with the Freidrich Naumann Foundation is making an attempt to rekindle communal unrest  in the country. (News items of 28/29th May)

Sir, you will see from the chronology of these facts the conspiracy that is being hatched against me to vilify me and tarnish my image. It is sad that they are dragging the names of innocent law abiding people in to this having committed no crime.

All these fictitious stories are only a figment of their imagination. Had there been an iota of truth in these fabricated news I would not for a moment thought of bringing this matter before you.

It is the duty of the media to act responsibly, truthfully & fairly. They have no right to go on a journey of their own of character assassination & mislead the people with untruths, false information & defamation. This is not the first occasion ITN has maligned me. *

Mr. Speaker, You are the custodian of our rights & privileges. I am requesting you to refer this matter to the Committee of privileges for an appropriate inquiry.

The English transcription of the relevant news items & the news paper articles are tabled herewith.