Ranil Wickremasinghe says that he didn’t accept the premiership to protest any one? Then why did he vote to protect Gota? – M. Sumanthiran. MP 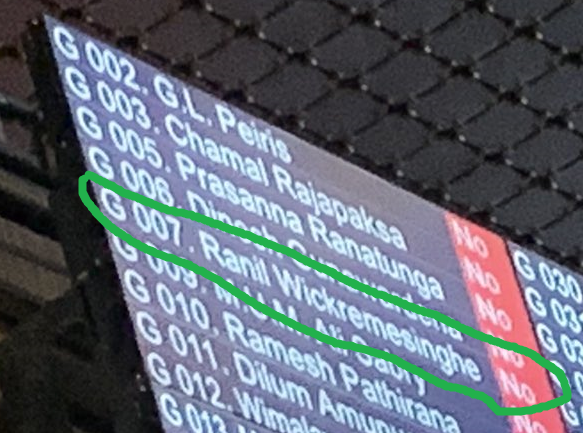 First let me express my deep sadness at all the violence that was perpetrated. Particularly to my colleagues in this house, whose houses were burnt, attacked and most certainly my condolences to Hon. Athukorala’s family for losing him at this time.

“For almost for 40 days, people have been camped on the road, saying “Gota Go Home”. But those who call themselves people’s representatives who come and sit here are deaf, they cannot hear that. They can’t even agree to take up for discussion, for debate, a matter that people have been shouting from the streets. This is unprecedented in this country, unprecedented”

We don’t condone any violence from anyone. And it is noteworthy that a lot of this violence or may I call it counter violence, and I’ll say why I call it counter violence, was aimed at members of parliament mostly, and other politicians. My colleague Hon. Rasamanickam and I met you the other day in your official residence Hon. Speaker, when the Emergency was declared, and when we came out the press was there and both of us made an appeal to everyone, not to resort to violence and more importantly we said don’t destroy the institutions. “We stand with you for the change that you desire, but those changes must happen within these institutions. If these institutions are destroyed, then it will only be anarchy that prevails in the country, and that is not good for anyone.” We said we understand the frustration of the youth, that there is so much delay; that it takes so long. But nevertheless there is no other way. Today is a good example, of this delaying tactic.

For almost for 40 days, people have been camped on the road, saying “Gota Go Home”. But those who call themselves people’s representatives who come and sit here are deaf, they cannot hear that. They can’t even agree to take up for discussion, for debate, a matter that people have been shouting from the streets. This is unprecedented in this country, unprecedented; this has never happened in this country before. For over a month not just in one place, but in several places. Surely the people’s representatives if we dare call ourselves that, must be prepared to discuss it here.  Why block that? What’s the fear? What’s the fear? Why can’t we discuss it?

That shows, that this parliament also has lost its legitimacy. Not only has the President lost his legitimacy, this Parliament also has lost its legitimacy. Parliament must be dissolved, but again that ‘ll be put to vote here, and MPs who are holding on to their positions will vote against that motion to dissolve Parliament. And they think that, that way they can carry on. No, they can’t, they are pushing the people of this country to seek other remedies. That is the danger, that is the danger of not giving the voice of the people an expression here. This danger you don’t seem to understand. I condemn the violence against the ………

This Parliament is not giving ear to what the people are saying. All that I asked was that let’s debate it here. Now what’s your problem? Why can’t we debate it? There was emergency declared, and article 155 (4) 2 says: If the Parliament is at the date of the making of such proclamation, separated by any such adjournment or prorogation as will expire within 10 days, a proclamation shall be issued for the meeting of the Parliament within 10 days” now, 6th the Parliament adjourned, next meeting, today 17th, there’s a gap of over 10 days, the constitution very specifically says that if it is separated by longer than 10 days another proclamation shall be issued summoning parliament.

That wasn’t done. Article 42, which I read earlier in the day, says the President is responsible to this Parliament not only for his duties, performance, powers and functions under the constitution or written law but also for the law for the time being relating to public security. He has failed, even in the most recent exercise of his powers under the public security ordinance. Where the constitution says he shall make another proclamation summoning parliament, he hasn’t done that. He has not done that. So that is just the most recent one.

The attorney general whom you appointed who has been acting on your side, now he is naming Government members and he has said “arrest them” including the senior DIG for Colombo for allowing this to happen. But eventually the buck stops with the president.

Now who was in charge of the police at that time? Your own President! your President! and when we moved to discuss a matter – a motion of censure of the President, you protect him.  You blocked that motion. How is this possible?

The very person who allowed your house to be destroyed, the very person who allowed attack by all those assailants on peaceful demonstrators at Galle face the other day. It took more than an hour for those assailants to walk from Temple Trees to Galle face after destroying the huts that has been put up by the demonstrators outside the temple trees. What was the President doing? For one full hour? He was just there watching. Must have thought, jolly good, let them destroy Gotagogama also. I’ll take two for the price of one! After they did the temple trees he must have thought, bonus for me also let me get this also out, otherwise how do you explain? President who is functioning from the President’s house, not seeing for over an hour these assailants coming and mercilessly attacking unarmed, peaceful protestors.

The world has said this, everyone has said that, this is the most impressive of all the protests that they have seen. For over a month, they did not allow violence, they did not use violence, peacefully demonstrating.  And who was let loose on them? The government goons. Will anyone here say otherwise?

I am saying those are government goons, because they came out of the Prime Minister’s residence. They came out after expressing their support to the Prime Minister at a meeting. He gave lunch, and perhaps ample liquid refreshment along with it, and set them loose on peaceful protestors. And then you have the gall to protect the president even now. The one who allowed that attack, more importantly the one who allowed attacks on your own houses, it is the President!

And the government members unashamedly are standing here complaining about the violence against them without condemning the person who is responsible for that violence.

He collapses the economy of this country, he comes addresses the nations and says, I made wrong decisions I am sorry. When you say I made wrong decisions the next line must be “therefore I resign” that is the democratic tradition. My decision on “chemical fertilizer was wrong” he says, my decision in delaying going to the IMF was wrong he says. So resign! Take responsibility! Why only the Central bank governor and the secretary to the treasury? The final decision was by the President. Now that is one thing, what happens about all this violence?

“So Ranil Wickremasinghe  has switched, he has traded he has traded his Principles, his policy, which he publicly told this country, for a Prime minister’s job.”

And when we move, to even have discussion taken up today, only a motion of censure: nothing happens to your president, he doesn’t lose his job as a result, even that you protect him. Fortunately, today, all those who protected him, your names have been put on the board. The country knows who’s protecting the president, who is not protecting you.

Absolutely shameless conduct by the Prime Minister, and all those who sit on the government benches. I say the Prime minister because, this motion of censure when it was drafted the Prime minister who was in the opposition at that time wanted to have a look at it. I have the record here, the evidence of that, I sent it to him on the 26th of April, he vetted it, he told me let’s send it to Galle face we’ll have their consent also. He sent it to Galle face, he got their consent also. And he issued 2 public statements on the 30th of April saying I will vote for this. There was a tweet also, that he will vote for it. Now if he will vote for it, why did he vote against that being taken up today? What games is he playing? Only thing that has changed between that day and today is that he has got a job. He has got a job as a Prime minister. So he has switched, he has traded he has traded his Principles, his policy, which he publicly told this country, for a Prime minister’s job.

That’s the Prime minister we have in this country, we are ashamed, we are ashamed to have as a leader of the country, as the head of the state, this President whom the whole country wants to leave. We are ashamed to have as Prime minister someone who does not know whether he’s sitting or standing or walking. He doesn’t know what his Principles and policies are. He says one thing, does another thing. He says let’s have woman as a deputy speaker, publicly said it and he can’t get his members to vote for that woman candidate as a deputy speaker.

“PM Ranil Wickremasinghe  says today I didn’t take this job to protect anybody, then why did he protect the President in this vote that was taken a little while ago? Why did he do that?”

That is the Prime minister who is asking for support from the opposition. He doesn’t have the support of his own people, on the government benches, he is asking for support from us. We will support anything for the sake of the country. We will support everything that is done to save this country from this economic calamity, for which the President is absolutely responsible.

The final responsibility lies with the president but yet for the sake of the people we will support every right move. But that does not mean we will take a step back from criticizing, from laying the blame at your feet because that is where it lays. It doesn’t lay anywhere else. And now it lays at the feet of the Prime Minister as well.

Slightly edited version of the speech made by Hon. M.A.Sumanthiran M.P in Parliament on 17 th May 2022.