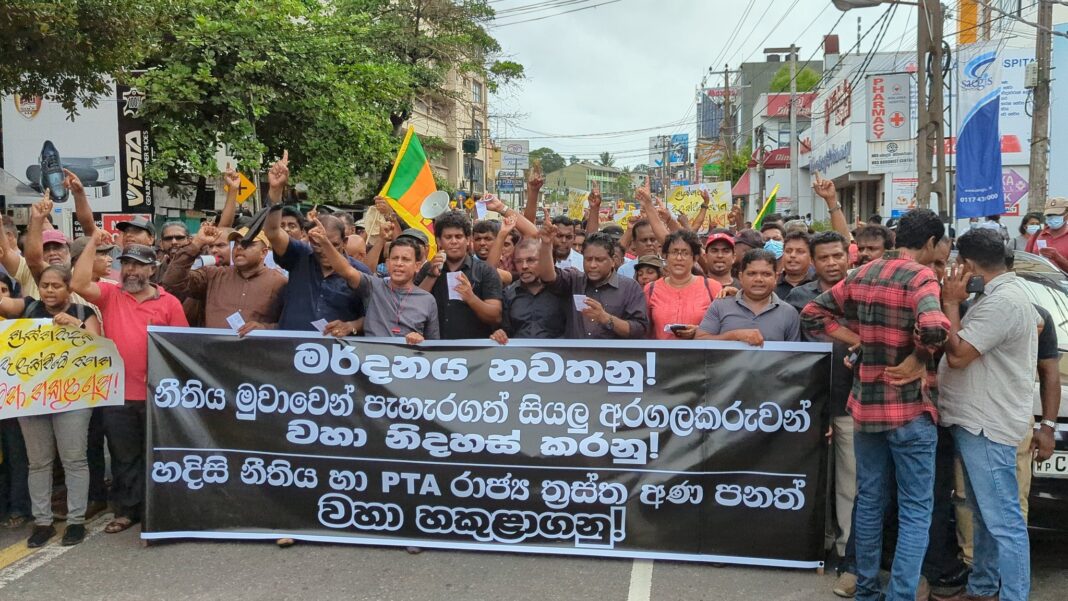 Mr Ranil Wickramasinghe became the Executive President as a result of the victorious struggle against the corrupt Rajapaksa regime, which led the country to collapse and bankrupt. The irony is Ranil Wickramasinghe had been portrayed as a failed political leader during the tenure of former President Mahinda Rajapaksa but the Rajapaksas; finally, hand picked him as ‘the Saviour of the Nation’.

Mr Wickramasinghe himself accused Mahinda Rajapaksa of entering into a secret deal with the Tamil Tigers to win the presidential elections in 2005. The LTTE ordered the Tamil voters in the North and East to boycott the election in favour of Mahinda Rajapaksa. Ranil was defeated with slim margin.

The United National Party (UNP) said Rajapaksa offered Rs.1500 million to LTTE before and after November 2005 presidential elections. During last general election, Podujana Peramuna with their powerful election campaign against UNP and Ranil Wickramasinghe managed to wipe out UNP by exposing central bank bond scam.  Therefore Ranil Wickramasinghe must be grateful to the protesters and the leaders of people’s struggle/Aragalaya for becoming the president. If Mr Wickramasinghe wants to extend the hand of friendship with them he should stop the crackdown on the protesters.  There is no doubt that Rajapaksas and their henchmen are behind the scenes of the crackdown.

President Wickramasinghe made an impressive speech at the inauguration of the parliament on the 3rd this month.  He raised hopes of the people promising to bring changes what participants of the Aragalaya expected.  People do not just believe the words judge through actions.

Branding the Aragalaya as terrorism

I have been monitoring the situation in Sri Lanka from London and therefore I have in-depth knowledge about the people’s struggle from the beginning.  Corrupt MPs in the government and so-called independent group including Wimal Weerawansa labelled the popular uprising, Aragalaya, as an evil political movement. MP Sanath Nisantha, who was among the violent attackers on the peaceful protesters on the May 9th, described in a media conference, the uprising was JVP led terrorism and proposed to crush them like former Prime Minister Sirima Bandaranaike did in 1971 and, President J.R Jayewardene and President Ranasinghe Premadasa did in 1988 and 1989.  It has been reported between 1988-1989 more than 60000 people were killed as JVP suspects.  Is this the solution they expect for the crisis?

Is that the truth about the popular uprising against Gotabaya Rajapaksa and his family regime? Regardless of age, ethnicity, education, religious backgrounds people from all sort of backgrounds including university professors to poor villagers, doctors to health care workers, little children to elderly people came to the streets from every corners of the island demanding the Rajapaksas to ‘Go Home’ because the worst economic crisis in our history, created by the Rajapaksa regime, hit everyone in the country.

People had been protesting against Gotabaya Rajapaksa regime on various critical issues such as rising cost of living, Human-Elephant conflict, fertilizers for faming, billions of tax frauds etc. But his government did not want to hear the outcry of the people.  Even during the peak of Covid-19 pandemic people came to streets demanding their rights. Finally the anger exploded.

Former Lanka enews writer Keerthi Ratnayake, in his recent interview with Hiru news presenter Chamuditha Samarawickrama, was telling to the audience that former president Chandrika Bandaranaike was the mastermind of the Galle face protests to defame Aragalaya. On the other hand he accepted he was an informant to the President Gotabaya Rajapaksa.  It is sad some journalist appear in public as salvators but behind the scenes they have their selfish agendas endangering the innocent people of the country like Namal kumara who misled the people to cover up the Ester-Sunday conspiracy.

President Wicramasinghe is well aware of the entrenched attitude about the current members of the parliament (MPs).  The protesters chanted slogans condemning all 225 MPs, as they know the majority of the MPs are corrupt, some have criminal backgrounds and they always consider their own advantages.  It is similar to the recent remarks of former Pakistani prime mister Imran Khan while he was being interviewed by Sky news channel.  He said 2/3 of MPs in the parliament were criminals, 60% of cabinet ministers on bail, and the Prime minister was about to be sentenced. But they are safe because they did his regime change with American influence.

The best example I can give about the majority of the MPs is, the voting for 20th amendment giving dictatorship powers to former president Gotabaya Rajapaksa.  No president in the globe including American and French President had such enormous executive powers.  Those MPs who voted for the 20th amendment knew the four decades of bloodshed our people had witnessed due to the dictatorship rules.  They are also responsible for the current situation.

To the attention of Ranil Wickremasinghe

Mr Wickramasinghe is a knowledgeable person, when he speaks and responds to journalists, foreign interviewers he supports his argument with international examples.  But unfortunately he does not demonstrate his knowledge about how people react when they are provoked.  Therefore I give some examples from recent protests from the UK, France, and the USA, mainly for those interpret and label the uprising as terrorism.

In 2010, when the Tory government led by David Cameron increased the university tuition fee from £3000 to £9000, thousands of protesters gathered to London and protests turned to violent. Hundreds of student protesters clashed with police during the rally. Crowds of student protesters broke into 30 Millbank, where the Conservative Party‘s headquarters are based, smashing the windows and wrecking the lobby as the peaceful demo turned ugly.

They got onto the roof, lit fires and threw missiles at police.  The Protesters enraged by a Parliament vote to triple university tuition rate caps, attacked the car carrying Prince Charles and Camilla, Duchess of Cornwall, Thursday night on 09 December 2010.  The demonstrators broke a window and tossed paint on the car, however neither royal family member was injured in the attack.

On October 27, 2005, two French youths of Malian and Tunisian descent were electrocuted when they entered to a power station to evade police arrest in the Parisian suburb of Clichy-sous-Bois. Their deaths sparked nearly three weeks of rioting in 274 towns throughout the Paris region, France, and beyond The rioters, mostly unemployed teenagers from destitute suburban housing projects caused over €200 million in damage as they torched nearly 9000 cars and dozens of buildings, day-care centres, and schools. The French police arrested close to 2900 rioters; 126 police and fire fighters were injured, and there was one fatality – a bystander who died after being struck by a hooded youth.

On May 25, 2020, George Floyd, a 46-year-old black man died after the brutal police arrest in the U.S. city of Minneapolis.  Floyd had been arrested on suspicion of using a counterfeit $20 bill. After the arrest the white police officer Derek Chauvin knelt on Floyd’s neck for over nine minutes while Floyd was handcuffed and lying face-down in a street. As a result the black man died.

The George Floyd protest movement began hours after his murder as bystander video was being circulated on social media and word of mouth began to spread. Protests first emerged at the East 38th and Chicago Avenue street intersection in Minneapolis, the location of Floyd’s arrest and murder, and other locations in the Minneapolis–Saint Paul metropolitan area of Minnesota. Protests quickly spread nationwide and to over 2,000 cities and towns in over 60 countries in support of the Black Lives Matter (BLM) movement. Polls in the summer of 2020 estimated that between 15 million and 26 million people had participated at some point in the demonstrations in the United States, making the protests the largest in U.S. history.  The rioting, looting, and arson that was seen in some 20 states in the days and weeks following the May 25 police killing of George Floyd in Minneapolis could cost the insurance industry up to $2billion in claims, it has been reported.

In April police shot dead one person, a father of two, 40 year old man and injured about 27, some critically, in an attack on a protest of thousands against the latest fuel price increase in Rambukkana.  Chaminda Lakshman was shot dead by police while he was waiting to get fuel. On the 09 May peaceful protests turned violent when former prime minister Mahinda Rajapksa’s supporters brutally attacked on peaceful protesters outside temple Trees and at the Galle face Green.

Can anyone still say the reactions of the people as terrorist activities? Who must be made responsible for the violence and destructions.  It is a question for President Wickramasinghe and the MPs who label protesters as terrorists.   Sri Lanka is the only country label popular uprising as terrorism.