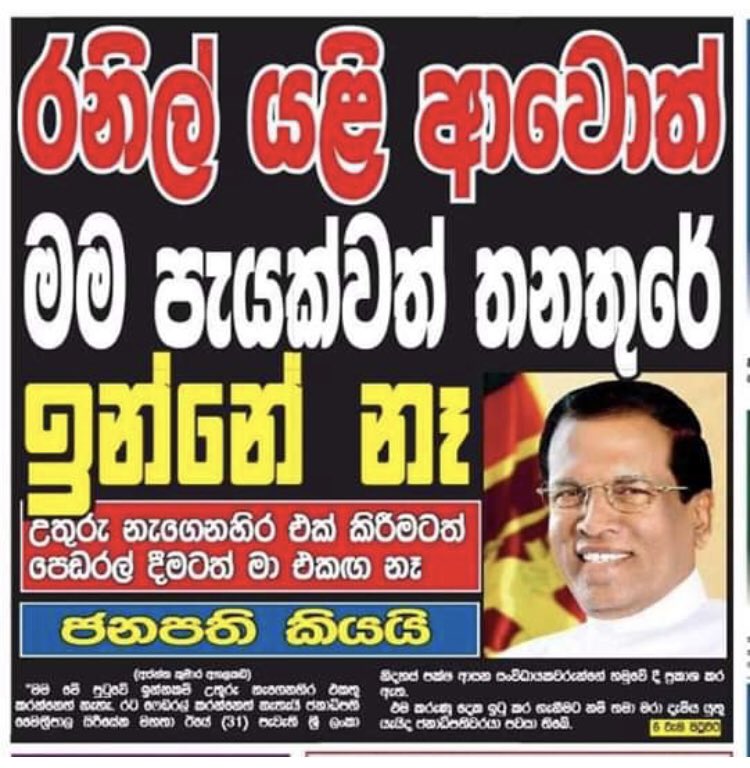 Image: Sinhala language news paper headline few weeks ago: I will not stay as president even a hour if Ranil W. becomes the PM again. Now Ranil W. will be swearing in  as PM  on 10 am Sunday the 16th.

AFP – Sri Lanka’s strongman leader Mahinda Rajapakse will step down on Saturday from his disputed position of premier, his son said on Friday, signalling an end to the seven-week long power-struggle that threatened to shut the government.

“To ensure stability of the nation, former president …(Rajapakse) has decided to resign from the premiership tomorrow after an address to the nation,” his legislator son Namal said.

The announcement came shortly after the Supreme Court banned Rajapakse, 73, and his purported government from exercising the powers of the office they claimed since October.

A day earlier, the Supreme Court opened the way for potential impeachment proceedings against President Maithripala Sirisena ruling that he broke the law by dissolving parliament last month.

A seven-judge bench unanimously agreed that Sirisena violated the constitution when he dissolved parliament last month to prevent Rajapakse suffering a humiliating defeat on the floor of the House.

Sirisena had also called a snap election nearly two years ahead of schedule. That was also cancelled by the courts.

Namal Rajapakse said they will join a coalition with Sirisena who triggered the political crisis on October 26 by initially sacking Prime Minister Ranil Wickremesinghe and replacing him with former foe Rajapakse.

Two of the country’s highest courts suspended Rajapakse till he could prove his legitimacy after he failed two no-confidence motions in the 225-member legislature in mid-November.

The court rulings also meant that the Indian Ocean nation of 21 million people was effectively without a government and heading for a shutdown raising fears among international credit rating agencies and holders of Sri Lankan bonds.

The country was taken by surprise when Sirisena sacked Wickremesinghe on October 26, almost two years before his five-year term was up and called a snap election for January 5.

Wickremesinghe refused to step down maintaining that his sacking was illegal. That issue is currently being canvassed before courts.

Political sources said Wickremesinghe was likely to be sworn in on Sunday morning, in a move that is expected to end the power vacuum.

There was no immediate comment from Sirisena or his office, but an MP from his party, Lakshman Yapa Abeywardena, told reporters that the president agreed to the latest measures to avoid a government shutdown after December 31.

If the stalemate continued, we would have ended up without a budget for 2019 and the government would not have been able to function,” Abeywardena said.

Earlier, Sirisena had refused to reinstate Wickremesinghe saying he had serious cultural and policy differences with him. However, sources close to both sides said they managed to sink their differences during a closed-door meeting on Thursday.

On Wednesday, the legislature voted overwhelmingly to demand the reinstatement of Wickremesinghe.

The leftist JVP, or the People’s Liberation Front, insists that Sirisena should be investigated for orchestrating what they call a coup and that there should also be an impeachment process.