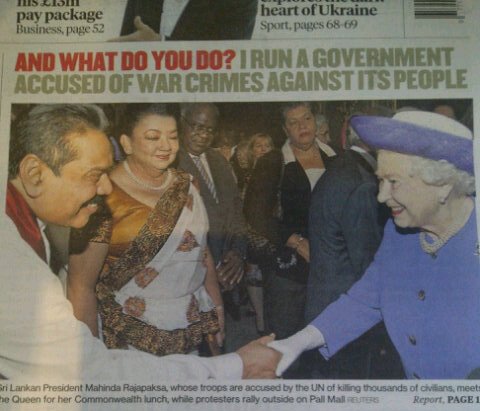 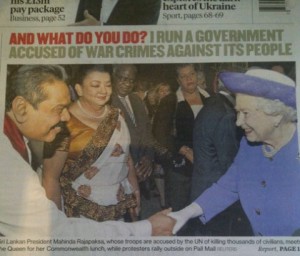 On the eve of the Presidents visit to the UK to attend the Queens Diamond Jubilee, Gotabaya in his usual finger wagging style told the BBC that the north cannot be recognised as a “Tamil” region.

In the run up to the first Presidential election, Mahinda Rajapakse told his Sinhala Buddhist electorate that he is from the “south”. Was he not indicating that he was from the Deep South, which is hard line Sinhalese?

By denying that the North is a Tamil region, the Rajapakse’s are denying to the Tamils, what the Sinhalese take for granted in their perceptions of the Deep South and elsewhere.

On the eve of Mahinda Rajapakse’s visit to the United Kingdom to attend the Queens diamond Jubilee, one would have expected that the BBC interview would have been made use of to build bridges and to hold out the hand of reconciliation towards the Diaspora Tamils. It could have been a great strategic opportunity to demonstrate the administrations credibility in terms of reconciliation.

Instead, brother Gotabaya gave his finger-wagging lecture to deny the basic identities of our northern community, enraging and mobilising the Diaspora against the Sri Lankan state, which insists on exposing itself as a republic, which has been seized by the dominant tribe, and is administered to perpetuate majoritarian prejudices.

The BBC and other TV stations interview Gotabaya knowing very well that he will not fail to shoot himself and Sri Lanka in the foot and he obliges every time. The last BBC interview was no exception.

Sections of the Tamil Diaspora in London would have mobilised against Mahinda Rajapakse with or without Gotabaya’s BBC interview, but unfortunately what Gotabaya did was to enrage ordinary Tamils, in the same manner he would have enraged the Kandyans if he had denied the Kandyan identity of the Highlands.

Gotabaya’s comments indirectly assisted the more radical elements, in enraging ordinary Tamils towards their cause. There was no reconciliation here. He was adding fuel to the fire.

President Mahinda Rajapakse was at the receiving end even before he left for London as large numbers mobilised against the Sri Lankan state at Heathrow anticipating his arrival. His speech at the Commonwealth Business Council was cancelled on the morning of the 6th, as the British did not want any unpleasant incidences during the Queens Diamond Jubilee celebrations.

The British authorities obviously had prior intelligence of what was brewing later that afternoon. There was a massive lightening demonstration as thousands of Tamils marched on Marlborough House, where a luncheon was to be held attended by the Sri Lankan President. At 3.00pm my English neighbour complained to me that the Sri Lankan President was responsible for blocking the streets in central London where he had been held up.

Eggs and rotten tomatoes had been hurled as the beleaguered President fled from the Park Lane Hilton under heavy police escort to participate in various events and High Commissioner Nonis rode to the rescue with a photo opportunity with some British MP’s to save the day. Informal discussions were held between Prime Minister Cameron and President Mahinda Rajapakse on the sidelines at Marlborough House. Mahinda Rajapakse stood next to David Cameron during the Commonwealth group photograph, a thrilling prospect for a beleaguered President yearning for international recognition. There were meetings with the Maldivian President and the head of the Commonwealth.

Unfortunately Cuba, China, Russia and Iran are not members of the Commonwealth.

The Park Lane Hilton is unlikely to offer accommodation to the Sri Lankan President in the near future, considering the inconvenience caused to their clients.

All other heads of state attended the Diamond Jubilee Celebrations in vehicles, which displayed their respective national flag. For security reasons Mahinda Rajapakse was sneaked around under high security in a Range Rover without the national flag. He was later seen smiling in the same vehicle being driven to the airport. The President left for Rome for an audience at the Vatican, perhaps yearning for solace.

The British as usual managed that fine balance between the right of the citizen to protest and the rights of a member nation of the Commonwealth with no violence in law enforcement. They have and continue to fine tune their law enforcement and policing strategies.

If High Commissioner Nonis’s strategy was to tread softly ignoring the war crimes issue and focusing on the positives of Sri Lanka, then the 6th of June was a massive embarrassment before the entire Commonwealth and the British public who had up to then enjoyed a peaceful Diamond Jubilee free of such incidents and unpleasantness. Her Majesty would not have been amused.

For Nonis who has no prior diplomatic exposure it would have been a baptism by fire. But thanks to his British public school education, he delivered with a stiff upper lip, where many would have failed.

Referring to the Tamil Diaspora as “terrorists” or “terrorist rump” is a failing outdated strategy, which only exposes the political bankruptcy of the Rajapakse administration, which seem increasingly incapable of guiding Sri Lanka strategically away from the present morass. Sri Lanka needs a paradigm shift in strategy to defeat the challenges that confronts her. The present tinkering is too little, too late.
DBS