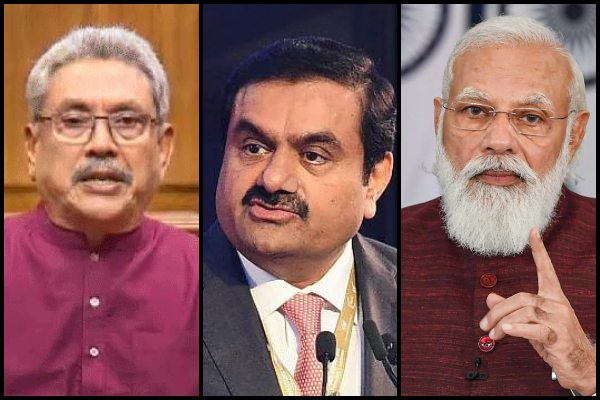 New Delhi: The head of Sri Lanka’s electricity authority has testified before a parliamentary panel that he was told by Sri Lankan President Gotabaya Rajapaksa that Prime Minister Narendra Modi of India had insisted a 500-megawatt wind power project be directly given to the Adani group.

Responding to the claim, Rajapaksa has denied asking for the project to be given to any specific entity.

At an open hearing of the parliamentary Committee of Public Enterprises,  Ceylon Electricity Board (CEB) chairman M.M.C. Ferdinando said the Sri Lankan president had told him the Indian prime minister was insisting the 500 MW wind power plant be given to the Adani Group.

“On November 24, 2021, the president summoned me after a meeting and said, India’s prime minister Modi is pressuring him to hand over the project to the Adani group,” Ferdinando said, according to a video clip of his testimony uploaded by Sri Lankan news channel, News1st.

He was answering questions posed by the committee chair and another member about how the Adani group had been chosen to construct a 500 MW wind power plant on Sri Lanka’s northern coast.

Ferdinando told the committee that he informed the president that the matter didn’t concern the CEB, but the Board of Investments. “He insisted that I look into it. I then sent a letter mentioning that the president has instructed me and the finance secretary should do the needful. I pointed out that this is a government-to-government deal,” he said.

During the hearings, the panel chair, Charitha Herath, asked whether the wind power deal would be considered “unsolicited”. “Yes, this is a government-to-government deal, but the negotiations should take place according to the least cost policy mentioned in the act,” said Ferdinando.

One day later, President Rajapaksa contradicted the public sector head. “Re a statement made by the #lka CEB Chairman at a COPE committee hearing regarding the award of a Wind Power Project in Mannar, I categorically deny authorisation to award this project to any specific person or entity,” he tweeted on Saturday evening.

The public hearing took place on Friday, a day after parliament passed an amendment to the 1989 Electricity act that removed competitive bidding. The principal opposition,  Samagi Jana Balawegaya (SJB), claimed that the key reason for bringing forward the amendment was to accommodate the “unsolicited” Adani deal. The SBJ demanded that projects beyond 10 MW capacity should go through a competitive bidding process.

The amendments to the Sri Lanka Electricity Act were passed with 120 votes in favour of the amendments against 36 in the 225-member Parliament amid strong resistance from power sector trade unions in the state-run Ceylon Electricity Board (CEB). Thirteen MPs abstained in the voting.

Engineers at the state power entity have given notice of a strike to protest the amendments becoming law.

Earlier in the week, the CEB engineers union claimed that the Adani group had first proposed to sell power to CEB at 6.50 US cents per unit. “Now attempts are being made to give the project for 7.55 cents a unit,” CEB Engineers Union President Anil Ranjith told reporters on June 6.

Sri Lankan media group EconomyNext reported that former CEBEU president Saumya Kumarawadu said that under competitive tendering, a wind plant could be built to sell power at 4 cents a unit or below.“7.55 cents is about twice the price,” he said. “Over 25 years, that is about $4 billion”.

Gautam Adani visited Sri Lanka in October 2021 and tweeted about his meeting with President Rajapaksa, adding that he was looking at “other infrastructure partnerships” besides the port project:

While Ferdinando told COPE that President Rajapaksa told him about Modi’s demand for giving the project to Adani in November 2021, the MOU to set up the two renewable energy projects in Mannar and Pooneryn came to light only in March this year.

Even then, the opposition had raised an alarm over Adani being handed over the project. “It is with deep regret that we note that the Adani Group has chosen the back door to enter Sri Lanka. Avoiding competition is not something we take kindly. It hurts our battered economy, aggravates the balance of payment issues, and causes further misery to our citizens,” SJB chief executive Ajith P Perera was quoted in The Hindu as saying.

The Adani group had also previously raised eyebrows when Sri Lanka repeatedly referred to the Indian conglomerate as a ‘nominee’ of the Indian government for the West Container Terminal project at Colombo port. The Indian government denied that it had nominated any company for the project. The Adani group subsequently entered into a Build Operate and Transfer (BOT) agreement for WCT in September 2021. 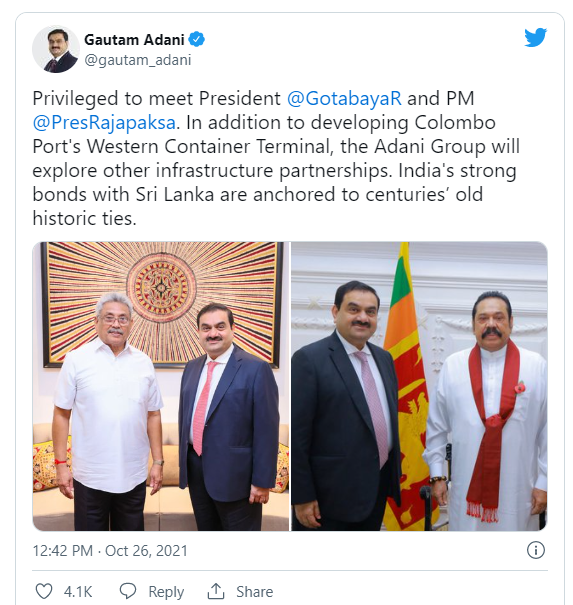 The Indian Ocean island nation is in the midst of its worst economic crisis as an independent country. With its foreign currency coffers empty, Sri Lanka has already defaulted on sovereign debts.

In the last few months, India has been largely solicitous towards Sri Lanka’s urgent needs for fuel and food. Till now, India has provided economic assistance mainly in the form of lines of credit, amounting to around $3.5 billion, to buy essential items.