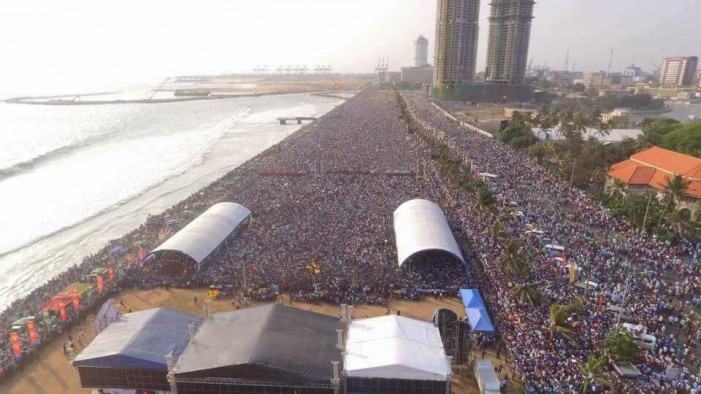 It was some half a century ago that we marched crying the slogan “We are going to – Galle Face; Come with us to – Galle Face.” My elder brother and I had two red shirts especially made by our mother for May Day. She wore a red saree. My father had red bush coat. That was the May Day rally and demonstration of the united left in 1963, which shook the ruling classes in the country.

N. Shanmugadasan, the leader of the Sri Lanka Communist party (Chinese wing) who penned his biography “Political Memoirs of an Unrepentant Communist” described that historic May Day thus:

“Now, in 1963, the movement for left unity gained momentum, particularly in view of the poor performance of the SLFP, and the threat of extreme reaction staging a come-back. By May Day 1963, sufficient progress had been made so that the three left parties called for a united May Day Rally. The enthusiasm of the ordinary people for left unity can be gauged from the gigantic demonstration and rally that took place on that day. Ceylon had never seen anything like that ever before, or ever since. Not only did unprecedented thousands march in the demonstration, but thousands more thronged the route, lining it several deep and occupying every vantage point, to watch this unique spectacle which to many was the realisation of their deeply cherished hopes. The Galle Face Green teemed with humanity.”

At that time there were no buses bringing party supporters to the venue. No one carried photographs of the politicians, printed and provided by those politicians themselves. Every one travelled to Colombo on their own expenses. We even brought rice, pol sambol, alabadum and bala malu from home for lunch.

Today in comparison we can see similarities as well as differences. The defeated semi autocratic forces are aiming for power. It is they who fill the Galle Face on May Day. Like in 1963 the Government is limping, walking like a crab that preaches others to go straight. After the first 100 days when far reaching democratic reforms took place, the only thing the Government is doing appears to be bragging and running to foreign countries.

In 1963 the Prime Minister Sirimavo Bandaranayake was quick to understand the dynamism of the left unity shown by the Galle Face May Day. She understood by instinct that only way to safeguard her power lies in breaking that unity. The three left parties had formulated 21 demands and was gaining strength.   She only had to pay three ministerial posts and buy the LSSP to destroy the left unity.

Now we need to explore how dynamics of the May Day 2017 is going to create a new balance of forces and different momentums.  In a sense, the future of the January 2015 victory depends on these post May Day new developments.

Rajapaksa accepted the challenge thrown at him by the ruling politicians to fill up the Galle Face if he can. He won the challenge. He was able to gather the largest May Day crowd without even without the state power. That itself is a remarkable achievement. But at the same time one should understand that the ability to mobilise people does not always mean the correctness of political ideology. If mere popularity is a sign of political correctness, self-proclaimed murderer President Dutarte should be a great leader. History provides us with examples of a number of popular dictators. The LTTE leader Prabhakaran too could have most probably become the popular Tamil leader if he had the chance to contest in an election.

But in real politics what matters at the end is numbers. According to conservative estimates, SLFP and UNP May Day rellies together had more numbers than the Rajapaksa May Day rally. Almost all other May Day rallies held around the country too opposed Rajapaksa policies. Arithmetic as well as Algebra of the May Day 2017 numbers does not show an immediate possibility of Rajapaksa capturing power.  His forces are definitely gathering momentum while the rainbow coalition that defeated him is in disarray and is disheartened. But that is not what we hear.

Politicians belonging to Sirisena camp openly count Rajapaksa’s May Day numbers and Sirisena’s May Day numbers together saying “we all belong to SLFP”. Their argument is that if both factions come together SLFP could beat the UNP in any election in hands down.  The leading members of the Sirisena led SLFP has come out openly against the present unity between the SLFP and UNP.  Two of them even called for uniting with the Rajapaksa faction to defeat the UNP.  Most probably this trend within the SLFP will gather strength in the coming months.

UNP leader Ranil Wickremesinghe’s game plan of splitting the SLFP by strengthening the Rajapaksa faction is not a secret.  Wickremasinghe’s political strategy is not political campaigning but political manipulation.  When he was the Prime Minster during 2002 -2004 his strategy was to strengthen Mahinda Rajapaksa against President Kumarathunga and SLFP second in commander Anura Bandaranayake.  Although he thought the conflict he was fuelling within the SLFP will help him to regain power, Rajapaksa was able to maneuverer him out of power in 2005.

On the other hand, no one knows of any political strategy of President Sirisena. That is why politicians close to Sirisena make statement contradicting each other. Because he does not work on a political strategy, Sirisena has been unable to build a strong group of politicians around him. During the last two years he has taken virtually no political step to strengthen the party and his leadership other than attending all kinds of opening ceremonies and making impromptu speeches.

In this context, Sirisena will find it difficult to manage the shock waves generated by the Rajapaksa’s May Day rally.  Rajapaksaist Trojan horses within the SLFP will gain more ground and pressures to leave the coalition with the UNP and Wickremasinghe will increase. Already emboldened by the success of Galle Face mobilisation Rajapaksa camp has threatened to call a hartal to over throw the Government. Rajapaksa himself predicts serious political developments in coming weeks. Pro Rajapaksa media is overflowing with reports of heightening conflicts between the two coalition partners of the government.

To ease the conflicts within the Government, President Sirisena has appointed a committee, according to media. He knows that Rajapaksa’s re-capturing power will be fatal blow to him politically and personally and to his true associates.  But he seems to be helpless in front of Wickremasinghe’s political manipulations.

At this junction, it appears that there are a number of steps needed to off-balance Rajapaksa’s extremist political agenda.

2. Re-invigorate the reform agenda of January 2015 change without waiting for a fully pledged new constitution. Providing a greater devolution as a solution to the ethnic issue will win back the trust of the minorities.  There are many promised reforms in waiting such as the release of political prisoners, abolishing of the Prevention of Terrorism Act and releasing military occupied land of the Tamil and Muslim people.

Start a genuine political discussion on the issues of governance and democratic reforms with civil society groups around the country breaking the monopoly of Colombo based elite smaller civil society groups. They are the real foot soldiers of the people’s campaign against Rajapaksa autocracy.

If Sirisena – Wickremasinghe coalition fails to implement such a course of action, it may be difficult to stop Rajapaksa clan capturing the power and establishing Rajapaksa kingship. Such a scenario could have deadly repercussions for the President Sirisena and his associates. Wickremasinhe will be happy to get back his coveted post of leader of the opposition.