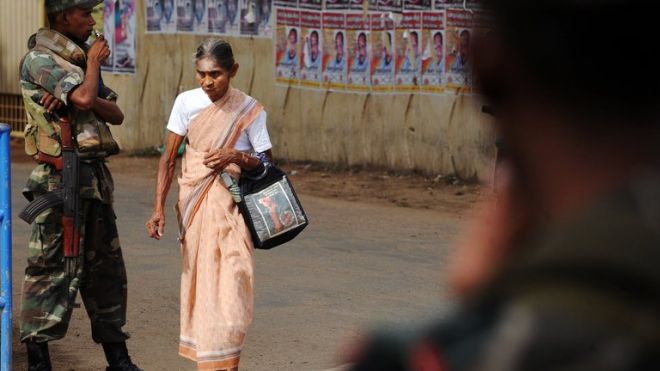 Issuing  a statement f ormer President Mahinda Rajapaksa stated “I request all members of the SLFP serving in this government not to allow their enslavement to the UNP to go so far as to betraying every principle that the SLFP has stood for in the past six decades.”

He has focused his criticism mainly on report of the subcommittee on Centre-Periphery relations opposing greater devolution of power to the provinces.

The reports submitted by six subcommittees on constitutional reform appointed by the Constitutional Assembly were tabled in parliament while everybody’s attention was focused on the budget. With that government ministers moved fast to meet the Ven. Mahanayake Theras with a view to obtaining their support for these proposals by saying that no recommendations have been made to alter the unitary character of the constitution, the special status accorded to Buddhism or for the merger of the northern and eastern provinces. Furthermore, leaving aside all the strikes and demonstrations over the budget, the president himself spoke in parliament about the need to devolve power. In the meantime government parliamentarians and ministers are being showered with all kinds of privileges such as new cars and generous special allowances.

All these are signs that portend great danger to the nation. During the last presidential election campaign, the two main constitutional reforms promised to the people by this government were; the abolition of the executive presidency and reform of the electoral system. Neither of these two key issues have been dealt with by the subcommittees appointed by the Constitutional Assembly. Instead, six reports have been released on matters that were never even mentioned during the presidential elections.It is only in reading the subcommittee reports that the connection between the above mentioned events become clear. The subcommittee on ‘Centre Periphery Relations’ has openly stated that the ‘unitary character’ of our constitution is an ‘impediment’ to the functioning of the provincial councils and some of the reports have made recommendations that are designed to end the unitary character of Sri Lanka without however deleting that word from the constitution. I would like to highlight some of the most harmful recommendations as follows:

5.       If a state of emergency is to be in force continuously for a period in excess of 3 months or for a period of more than 90 days within a period of 180 days, the extension of the state of emergency will require a ‘special majority’ in parliament. The courts will be given the power to review and even invalidate the declaration of emergency and the emergency regulations. The judiciary is not equipped to determine whether a situation warrants a declaration of emergency or not and such matters should be the exclusive preserve of the executive. These provisions are obviously meant to ensure that the state will not be able to respond adequately to an emergency. Everyone knows that there are some elements who want to weaken the Sri Lankan State.

6.       The Subcommittee on the Judiciary has recommended that when judges of the Supreme Court and the court of appeal are to be appointed, the nomination of suitable candidates would be done by a panel of former supreme court judges. This panel is to be appointed by the incumbent chief justice after consulting the Attorney General and the President of the Bar Association. The Bar Association is a highly politicised body and once had a UNP parliamentarian serving as President. His successor openly worked against my government and accepted a top political appointment from this government. The manner in which the Bar Association accepts funding from foreign powers has been commented on in the media. Such a body should never be given a role in nominating judges to the highest courts. There is also a serious conflict of interest issue in giving the private bar a say in appointing the judges who will be hearing their cases. This will lead to collusion and corruption and erode public confidence in the entire legal system.

7.      It has also been recommended by the Subcommittee on the Judiciary that a seven member constitutional court made up of judges and ‘specialists in the field’ be set up outside the regular court structure to exercise  exclusive jurisdiction in relation to interpreting the constitution, reviewing Bills, the post enactment review of legislation and to adjudicate in disputes between the centre and the provinces.  If a constitutional matter comes up in any case in any court in the country, it will have to be referred to this constitutional court. Under the present constitution, the interpretation of the constitution and review of Bills is the exclusive preserve of the Supreme Court and this should not be changed.  We also have concerns about who the ‘constitutional experts’ sitting on the bench of this court will be.  Furthermore, the principle applied hitherto in this country is that the courts will not have the power of post enactment review of legislation.

8.      The Subcommittee on Fundamental Rights has recommended that the standard provision found in most constitutions to the effect that the laws in force at the time the new Constitution comes into force would be valid only to the extent that they don’t clash with the new constitution; be dispensed with in relation to the ‘personal laws’ of certain communities. If any personal law is allowed to stand above the constitution, that would be a case of according to certain communities privileges not available to other communities and will give rise to ethnic and religious tensions.

9.       According to Sri Lanka’s legal system, foreign treaties entered into by the government are not automatically incorporated into domestic law and parliament has to legislate the provisions of that treaty into law. The Subcommittee on Fundamental Rights has recommended that treaties to which Sri Lanka is a party at the time the new constitution comes into effect, should automatically get incorporated into domestic law after a lapse of two years. This is a naked attempt to bring into force through the back door, Optional Protocol I of the International Covenant on Civil and Political Rights which was ill-advisedly signed in 1998 but due to subsequent enlightenment, never incorporated in our law by parliament because it makes our Supreme Court subordinate to the Human Rights Committee in Geneva. The automatic, unplanned incorporation of foreign treaties in our laws in the manner proposed will lead to confusion within the legal system.

10.  One of the principal recommendations of the Sub Committee on Fundamental Rights is that both Sinhala and Tamil be recognised as the official languages of Sri Lanka. In 1957 S.J.V.Chelvanayagam proposed to make Tamil the language of administration in the North and the East with ‘reasonable provision’ for the use of Sinhala for the Sinhala minority living in those areas. This was same the policy that S.W.R.D.Bandaranaike applied to the whole country with Sinhala as the official language and reasonable provision for the use of Tamil especially in the north and east. In India too, Hindi – the language of the largest linguistic group – is the official language while reasonable provision has been made for the use of other languages like Tamil, Malayalam etc. These are arrangements that should not be disturbed with ill-advised experiments.

I call upon the government to act more responsibly in this all important matter of constitutional reform and to take up the two main electoral reform pledges they gave the people first, before dealing with matters that are of interest only to separatists and certain interested foreign parties. None of the recommendations mentioned above should be in the final draft of the constitution. The fact that the government sent an SLFP delegation to mislead the Ven. MahanayakeTheras about the constitutional reform proposals shows that they are trying to use the nationalistic credentials of the SLFP to deceive the MahaSangha and the people to push through a constitution which will divide the country without using the word ‘division’.  I request all members of the SLFP serving in this government not to allow their enslavement to the UNP to go so far as to betraying every principle that the SLFP has stood for in the past six decades.