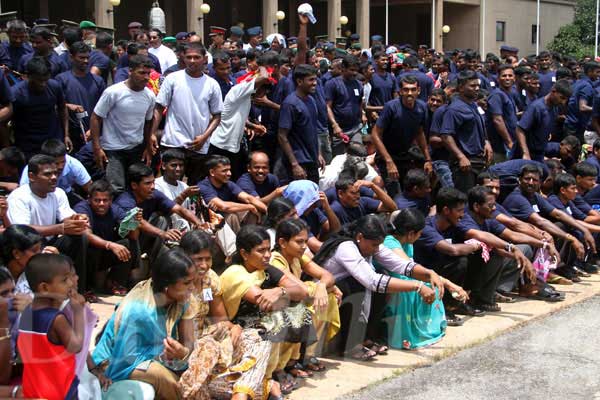 Speaking at press conference organized by  the joint opposition today (2 March) former Parliamentarian, Sarath Weerasekara has said that separatist groups have gathered information regarding 11, 000 rehabilitated and released Tamils and yet another 4,000 Tamils who did not surrender to the army, and have sufficient hidden arms and ammunition, enabling them to create a group of terrorists within 48 hours.

Sarath Weerasekara accused that the Unity government for creating a situation for separatist groups to roam freely in the country, putting the country at risk.

“In the period between 2009-2013 the LTTE attempted to raise its head. Separatist groups such as the Global Tamil Forum (GTF) were given the freedom to roam about in the North without restraint. Now they have collected the details on the Tamils that were released after being rehabilitated and have hidden weapons and have the ability to regroup as a terrorist organization once again,” he has said.

“Intelligence agencies are the backbone of national security in any country and there is an attempt to weaken the country’s intelligence network by arresting military officers in order to please the Tamil Diaspora,”  Weerasekara further accused the government.

“Today the government is offering dual-citizenship to Tamils. Though we think people from western countries will come flooding into the country as a result of this offer, there is a real threat that this would enable Tamil separatist groups to enter the country. No government has ever betrayed the country like this.”  he has said.