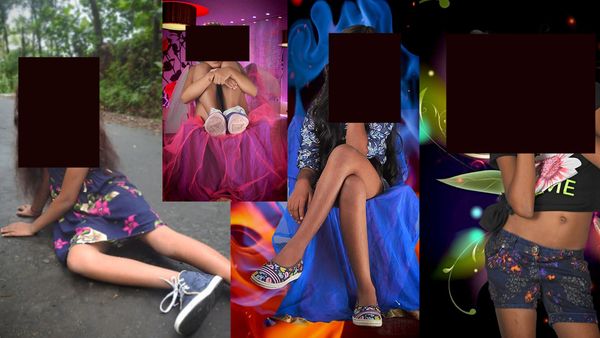 Image: When complained against posting these kind of child photographs on social media Sri Lanka’s Child  Protection Authority congratulated the photographer for his skills.

The sudden escalation in the cases of cruelty to children, some resulting in untimely deaths, has shocked the country with many trying to find out the reason or reasons for this criminal abuse.

Last week the Dickoya Police arrested an intoxicated man for allegedly tying up his two children to a tree and beating them mercilessly.

He had sent his children, aged six and seven, to the boutique on a chore and they had spent remaining money buying firewood for cooking.

In another incident at Gampola last December, a 14 year old girl was allegedly beaten to death by her father and a relative over a romantic relationship she had with a boy.

Social activists said these cases only portray part of the problem of the extent of cruelty committed against Sri Lankan children.

The National Child Protection Authority (NCPA) child friendly hotline operation 24/7 indicated a devastating turn in the cases of cruelty to children, mainly during the pandemic lock down time.

The United Nations Children’s Fund (UNICEF), which worked closely with the NCPA, said in a report that within 23 days, between mid March 2020 and the first week of April 2020 the number of cases reported through the helpline 1929 spiked from 10% to 30 %. The total number of complaints received was 292, of which 121 complaints were about cruelty towards children.

UNICEF generalised the phenomena saying there has been an increase in the number of domestic violence cases reported from all countries worldwide but local activists blamed Sri Lanka for not being prepared to face the aftermath of the pandemic.

Stop Child Cruelty Trust (SCCT) said child abuse including corporal punishment in schools was not a new trend in Sri Lanka and the country had failed to take timely measures to address child cruelty.

SCCT Founder and Chairperson Tushara Wickramanayake said there was an urgent for an effective national child protection framework that would send out a loud an clear message to offenders that any cruelty committed against children would be punished.

Suspended jail terms to offenders only help proliferate violence against children as offenders did not hesitate to go back to their old ways and continue abusing with impunity.

Dr. Wickramanayake said he had information that around 20,000 cases of child abuse were lying at the Attorney General’s office for the last ten years with no prosecution.

“This gives a green card to offenders,” she said.

Dr. Wickramanayake said she believed efforts to introduce a national child protection policy had failed due to the apathy of the NCPA, the body responsible for its implementation process.

Cabinet approval was obtained for a national policy in October 2019, however the NCPA had failed to develop a policy plan for implementation even after 14 months.

The process had also been slowed down by the appointment of unsuitable officers to the NCPA chair with two unseated within three years and the fourth being appointed last month.

Last year, the parliamentary Committee on Public Enterprise (COPE) had questioned the NCPA on its failure to develop a plan, and the then Chairperson Muditha Vidanapathirana acknowledged his lapse and promised to appoint a higher body to develop a five year plan for its implementation.

The NCPA, a powerful authority under the Presidential Secretariat when it was established in 1999, had been watered down in successive years. In 2005 the authority was brought under the Women and Child Affairs ministry, now under a state ministry.

Dr. Wickramanayake alleged that during the 2022 budget debate State Minister Piyal Nishantha, who was responsible for the NCPA, had failed to speak a word on child protection.

Last year in an effort to get the NCPA revitalised, the SCCT had written to President Gotabaya Rajapaksa requesting that a suitable apolitical and independent official be appointed to the post.

Image: A man posting children’s photos to social media was praised by Child Rights Protection Authority for his skills!

“But this time too, he had appointed a person with little or no knowledge of child rights,” she said.

In the first 60 days of 2020 when the pandemic began, the NCPA hotline received 2500 complaints, an average of 40 complaints a day.

Although the figures each year hovered around the 8500 mark in the last ten years, with increased numbers of complaints received during the pandemic lock down time the ‘incapacitated NCPA’ had been unable to come up with new strategy to curb the escalating violence against children.

In addition, the establishment of 44 women and children’s desks in 498 Police stations countrywide and handled by specially trained officers to investigate complaints had not been able to mitigate the plethora of problems children face.

The recruitment of child rights protection officers, probation officers and women development officers at district level had also failed to increase the effectiveness of the operation.

All the NCPA did was to promise to establish a formal database to assist the control of child abuse in August last year. Today, however it has omitted posting its 2021 statistics that it published yearly on complaints received through its helpline.

The NCPA’s psychosocial clinician director Lakmal Ponnamperuma said around 10,300 complaints were received last year. He said the NCPA was working on a World Health Organisation (WHO) inspired model on child abuse recovery, targeting parents and teachers.

Dr Ponnamperuma said the main challenges faced were the cultural values of people who hold to non-scientific beliefs justifying cruelty. They believed that a child had to be punished to be corrected.

However, in an unprecedented ruling in February last year, the Supreme Court gave a judgment in favour of a student against a teacher who had slapped him causing damage to his ear drum. The SC said archaic beliefs such as ‘to spare the rod and spoil the child’ should be discarded.

(Courtesy of The Sunday Times)