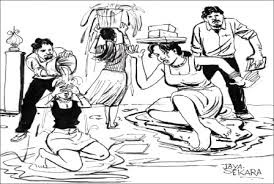 We, as civil society organisations and human rights activists that strive towards protecting the rights of women, girls and every individual, are making this collective statement to safeguard the rights of the female student who has been subject to ragging at the University of Kelaniya during the month of April 2016. The ragging has involved verbal, physical and mental abuse and threats and therefore violates the Prohibition of Ragging and Other Forms of Violence in Educational Institutions Act, No 20 of 1998. We identify university ragging as a prime source of violence which has become a menace to the entire university system. Ragging, as proven through studies, reported incidents and individual narratives is sexual and gender based violence and physical and mental abuse that has even resulted in several deaths of undergraduates in the past.  We must also remember that ragging amounts to a violation of the human rights of the victim and in extreme cases can be said to be form of torture.

Ragging disrupts the harmonious and healthy intellectual environment necessary for universities to function, instilling fear and anxiety among new university undergraduates.  It has also been alleged   that ragging functions as an invisible hand to perpetuate political agendas and interests of external political parties. Therefore, we strongly condemn the practice and /or promotion of ragging or any discourse that encourages such vicious and inhumane acts.

In the quest to safeguard the rights of the female undergraduate who has been subject to the above incident, we endorse her right to report and demand justice for the violence she had to undergo. Every woman, as an individual has the right to take legal action to safeguard her own rights.  We are proud of her courageous and heroic act of duly reporting and bringing this incident to the attention of the legal system despite several threats. We emphasize that she has the right to continue her education at the University of Kelaniya without being subject to any form of discrimination. We request that society respect and admire her and view her valiant act as a mark in history taken on behalf of future generations of women who could be subject to this callous and inhuman treatment.

We are concerned that on several instances related to this incident the media has publicized the names of the victim and the suspects along with identifiable photographs of the suspects. Sri Lanka has enacted the Victims and Witness Protection Act which provides guidelines to safeguard the security and the identity of the victims and the witnesses. The media, by revealing the identity of the victim has not only violated the Act but also has exposed her to great peril. In order to ensure justice and fair play we also call upon the media not to reveal the identity of those accused of ragging as they too have the right to be presumed innocent until proven guilty.  While endorsing the right of the public to be informed about ragging prevailing in the universities, we call upon the media to exercise caution and good judgement in reporting on these matters.

The above statement has been endorsed by the civil society organizations and individual activists mentioned below.