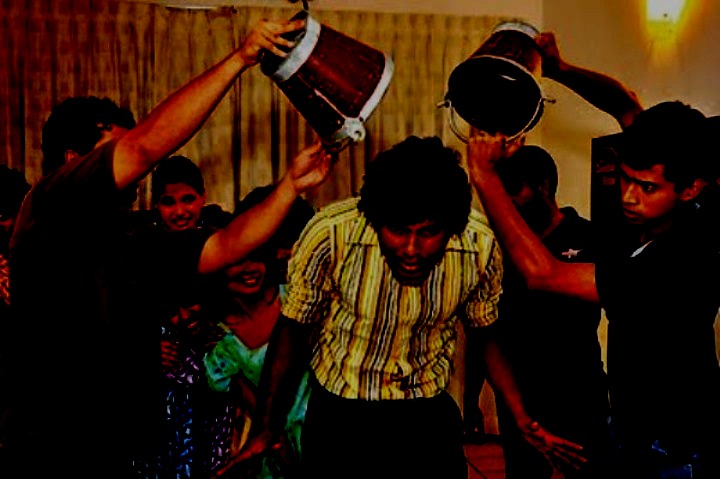 By Chula Goonasekera, Ex-Academic and Dean, University of Peradeniya.

University students try hard to clash with the police. The primary idea is to get injured, arrested, and thereafter escalate issues on a different note. Is this a reflection of student immaturity that we should excuse all the time, or a sinister plot that needs careful attention of the law enforcement authorities and the government?

Police and university students are very important communities in a civilised country. Police form the basis of discipline necessary for development and national progress. Students are our future. They need to gain knowledge and master skills to become future leaders and professionals of this country. Both police and students are funded by the tax payer and hence they are duty bound to play the role the public expects of them.

Only 3% of our student population qualifies for free tertiary education. The remaining 97% will not only have to self-fund their education elsewhere but also pay taxes to maintain free education for the aforesaid 3%. But, today the lucky 3% of students protest to prevent the not so lucky 97% follow any Sri Lankan self-funded courses, for example, in Medicine. This means the 3% lucky enough to be in universities want to ‘privatize and monopolize free university education’. In fact, university students have no right whatsoever to stop somebody else’s education. They can argue for maintaining quality of education. Ensuring quality is, however, the responsibility of the Quality Assurance Council and not of students.

Why is it that the privileged 3% of students waste their precious time on roads and clash with the police? Why do they practise the most primitive form of protest–– violence? Aren’t they destroying their own future and that of the country?

Sadly, they are instigated to violence by student leaders serving the politicians who use the university as recruiting grounds. Some students, as a consequence of political involvement, do not even complete their studies. This is at the expense of their own future and public money; they also deprive other students of opportunities to pursue higher studies. Those who do so should be made to pay back the public funds they waste.

The majority of students forming the front line in public protests are the first year university students. They are recruited by various means during the ragging process. Ragging in the university has become savage over the years. No one has been able to overcome this because of politics.

Once, a first year student confessed to me that he had to do manual work every Sunday to make ends meet. Considering the need for free time for studying I volunteered to personally provide him with some funds. He collected the money from my office for a few months and then stopped. Subsequently, I saw him, now politically involved, owning a motorcycle and a hand phone. He had fallen prey to political exploitation. As the Dean, I became his number one enemy. His behaviour changed. Education was his least priority. His sole intention was to somehow disrupt the education process through organization of boycotts of classes, exams and protests and intimidate students and the staff.

Some first year students hold on to their personal values and do not succumb to the process of ragging. I have met students as patients who had undergone surgery, and needed renal dialysis as a result of severe muscle breakdown following forced exercises. They were not prepared to give evidence to identify the culprits as they knew the authorities could do very little to safeguard their future within the university. Some students have even left university unable to bear this kind of torture; some have committed suicide.

I have caught new female students in the faculty library, pretending to be studying very hard – but instead busy copiously copying sentences of filth, book after book, fulfilling the tasks given by their seniors in the name of ragging. Those sentences were designed to destroy any family values they held. Dishonouring parents, teachers, administrators and destroying any cultural or religious values are the goals of this kind of activity.

This ‘getting to know’ episode of ragging extends for months until the victim succumbs to the wishes of the rogue leaders. There is no escape. It can be extreme and exhausting both physically and mentally. There is nothing called ‘good’ ragging in Sri Lankan universities. It is designed for verbal, physical or psychological abuse.

For non-adhering students this ragging spiral never ends. It continues as a form of discrimination later when they become seniors. No authority has really addressed this properly. Once, two female students together totally resisted obeying this senior command and harassment. Overnight, many posters appeared all over the faculty linking their names to various, unfounded, anti-cultural vulgar activities, totally designed to destroy their character. Of course, character assassination is part of this converting process.

Ragging is often an organised crime. It is known to involve sexual exploitation of both female and male students, though no one has really exposed it in detail. Stripping them naked individually and in groups is known to occur with other pervasive activities. Girls are made to run around on the basketball court in the hot sun. Forcing them to eat stale food from bins, lick toilet bowls and consume food mixed with cockroaches is common. Some are forced to crawl through a makeshift tunnel before being soaked with a bucket load of liquid consisting of a mixture of outflow from drains, sinks, mud, sewage and urine infested with worms. It’s called ‘bucketing’!

Organised ragging groups divide themselves as saviours and offenders. Saviours claim credit for rescuing these students during a ragging episode and try to secure their confidence and attention, to impart political ideology through lectures, and discussions.

There are other tactics. New students bowing to the leadership are granted unlimited freedom if they also function as informants and spy upon their other batch mates. They are often involved in collecting personal data about new entrants, including parents’ occupations, home addresses, wealth, telephone numbers and details of siblings. All this information is later used for intimidation if needed. Some of them may visit parents. Some students secretly record these conversations for later use or blackmail.

The students are also keen to show that all ‘good’ comes to university as a result of their protests. Staff and teachers are seen as useless individuals wasting public money and employed to serve the students as their own servants. This is the impression they want to give to the student community. For example, if university staff take action to propose a new faculty, for a group of students to enhance their educational experience, very soon the students will group and hold protest rallies demanding this. Finally, when the new faculty is installed, students claim credit and carry out celebration marches. It’s all part of a pseudo-democracy.

Student protest marches are common in the university when the freshers arrive. The initial training takes place in the university, usually at lunch time with an extension to boycott of lectures in the afternoon. These are designed to intimidate an administrator, a Dean, or the vice chancellor, and destroy instincts of self-discipline and honour amongst new students. This help give the new comers the impression that the student leaders are powerful creatures and university administrators are helpless and they cannot do anything about the ragging process. Thus, new students have no option but to fall in line.

(Original Caption: Ragging – a tool of extremists  by [email protected]/ The Island)